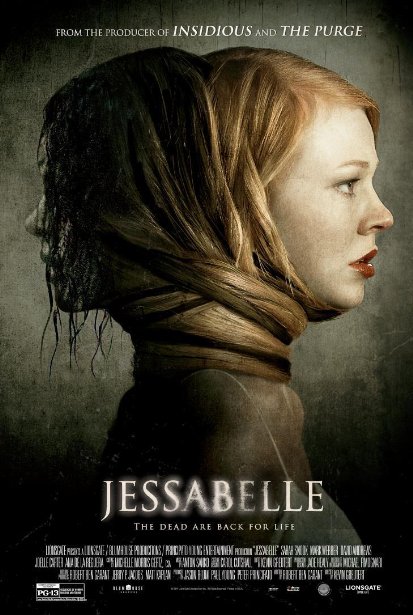 The poster of the Southern Gothic horror film Jessabelle (which by the time the movie gets released might have its name changed to a much more generic Ghosts, at least according to the screener I watched) shows two different heads of its heroine appearing to be corkscrewed together.

Sadly, the movie itself is not as much of a mind twister or head turner as it would like us to believe.

Of course, the idea of a horror film written by former Reno: 911/Night at the Museum co-scribe Robert Ben Garant is a certainly head scratcher, anyway.

Though in fairness, Garant jettisons the goofiness and tries for some legit scares.  There are no overly obvious jokes or women with huge asses in his script.  Teaming up with director Kevin Greutert (who is best known for doing two of the Saw sequels) and the Jason Blum horror factory (the Paranormal Activity, Purge and Insidious series amongst many others) has caused Garant to take it seriously.

At least as seriously as you can in a PG-13 film.

The lead character Jessabelle (Sarah Snook) has had a hard life.  Her mother (Joelle Carter of Justified) died of cancer soon after Jessie was born.  Her distant father sent her off to live with an aunt.  She seems to have finally found the good life: she has moved away, gotten a handsome boyfriend, is pregnant and moving to a new home.

Of course, in a film like this, a character like Jessie can’t be happy for long.  Specifically about five minutes into the film, when their pickup truck is creamed by a semi.  (It is never explained, but they must have for some reason been stopped and talking in the middle of an intersection.  That is the only way that a truck could slam so directly into the driver’s side door.)  Her boyfriend is killed, she loses the baby and two months later is still confined to a wheel chair.

With no place else to go, her estranged father (David Andrews) allows her to return with him to her childhood home in the Louisiana bayous.  At this point, she and her father are essentially strangers.  He is a quiet, sullen drunk and their relationship is strained to begin with.  Then when he catches Jessie watching some old VHS tapes that mom had left for her, he reacts angrily and irrationally.

Of course, there may be some reason for this lack of rationality.  In the videos, a hugely pregnant mom keeps reading tarot cards for her young daughter, all of which predict a violent death for the girl.  As she goes on, mom seems to lose more and more rationality, saying there is an evil spirit living in the home waiting for Jessabelle.

Perhaps it is being in the old home, perhaps the videos have her imagination on overdrive, perhaps it’s just being immobile without her chair, but suddenly Jessie starts hearing odd noises in the night and seeing strange shadowy figures in the night.

The set-up is suitably spooky and Jessabelle features some pretty good scares.  Sadly, the more we know about the evil presence haunting Jessie, the less sense the film makes.