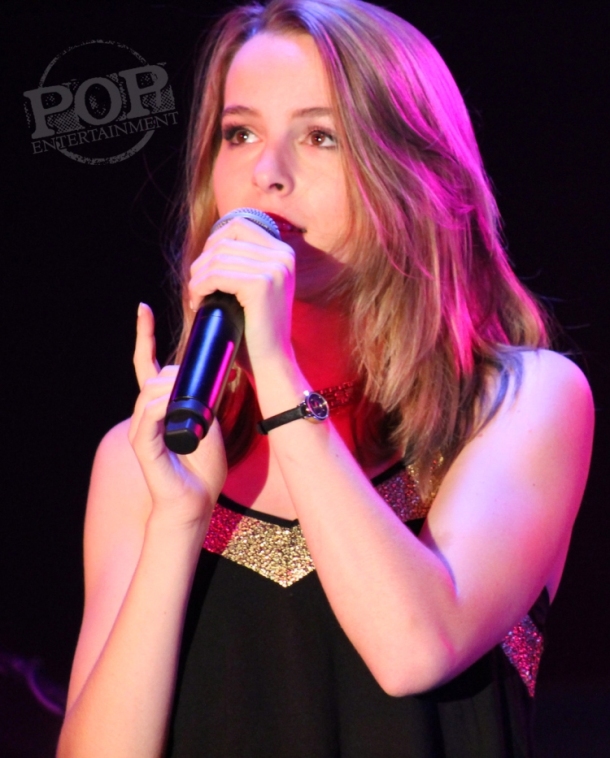 Hello, Her Name Is…  Bridgit Mendler

True to the lyrics of her hit song “Hurricane,” you can certainly say that talented singer/songwriter Bridgit Mendler is “standing in the eye of the hurricane.”  At the age of twenty one, the popular singer/songwriter and actress is a calm, sweet person surrounded by a crazy lifestyle which is spinning around her.

Mendler has had to balance her acting and music career for the last several years now, yet she still makes it look easy, seamless  and fabulous.  When her hit television show Good Luck Charlie ended earlier this year after four seasons on top of the Disney Channel’s ratings, Bridgit’s schedule lightened a bit allowing her to concentrate more on her music.

Born in Washington, DC, the Mendler family moved to the west coast when Bridgit was just eight.  While living outside of San Francisco, she developed her interest in acting while performing in small local productions.  By thirteen, she landed a guest starring role on a soap opera and knew that acting was what she wanted to do.  When Mendler got the nod from Disney to play the video-taping big sis on Good Luck Charlie, Teddy Duncan a.k.a. Bridgit Mendler became a household name to kids, tweens and teens everywhere.

Mendler started to develop her musical career while recording songs for several movies including Disney’s Lemonade Mouth, which she also starred in.  In 2012 she released her first single “Ready or Not,” from her debut album Hello My Name Is…”  And that’s when the concerts and touring started, and actually the first time we got to sit down with Bridgit.

We caught up with her again at her recent stop in N.J., where she talked about writing her own music, working on album number two, her fans, keeping in touch and with her Good Luck Charlie family and so much more. How have you been since we last time talked to you at Jingle Ball nearly two years ago?

Wow.  That was awhile ago.  Well, I finished up Good Luck Charlie.  We started working on a second album.  We’ve been touring a bit for this album.  We’re just basically finishing up touring now.

What are you looking forward to in your show tonight?

I am looking forward to sharing some new exciting things that people haven’t seen in the past concerts.  We are still definitely doing songs from Hello My Name Is, but we’re also mixing things up.

Are you working on your own music on your album?  Do you write your songs?

How will the new album be different from your past music?

I think it just boils down to influences.  I’ll just be influenced by different things.  At the same time I’m still the same person, same writing, same taste that is still inspiring me in this phase of life. Are you ever planning on acting again?

Yeah, yeah totally.  It’s just about the right timing.  I’ve been putting a lot into this album.  It’s hard for me to do both fully at once.  I just want to finish this task before I move on the next thing.

Do you miss Good Luck Charlie?

I do.  I really do.  I actually am seeing the cast tomorrow.  That will be good!  We definitely try to keep up with each other.  I keep up with the crew as well.  It was a really special time and I am so grateful for it.

Would you like to work in another sitcom, or something different than before?

It just depends on what the right thing is.  I think I’ll know it when I encounter it.  I would love to do movies.  If it’s the right series then that would be cool as well.  But something different would be nice. What has touring with so many different people been like?

It’s fun.  I love hearing artists that I haven’t been familiar with until I go on tour with them.  Also, there are people that I’m familiar with and I get to see their live take on it.  I think seeing people live is so much more fun.  Everyone has a different way of doing it.

When on tour, is there anything that you don’t like?

Just the unreliability of good food.  Sometimes you are in a situation where you only have crap and that is all you can eat.  That’s kind of a bummer.  We have all these little snacks on the bus.  It’s always a challenge to hunt down a nice meal though.

Who is your favorite artist at the moment?

I just recently saw Banks live, and she did a really good job.  She has a really beautiful voice. When you were at a younger age did you always see yourself performing?

I did perform a bit, but just for my family.  Honestly, the songwriting was most intuitive to me.  Performing and being on stage was never a part of my childhood fantasy.  Well, that’s not true.  I always use to love watching Hilary Duff do her performances.  Just seeing that crowd, and the energy of all that it, seemed exciting.  It gave me goosebumps.  I think the storytelling came natural to me, but performing has been something to get used to.  I am not a dancer and I am not elegant all the time.  Sometimes you feel awkward up there.

Do you write your music based on personal experiences?

Yeah, it can be a lot of different things.  It can start with a melody and then you try to think of what kind of story matches that melody to make it the best it can be.  Other times it can really be inspired by an idea that turns into the song, and that steers wherever it goes.  There are just so many more elements to a song.  It’s interesting what comes first because you never know. On stage, have you ever had an embarrassing moment?

Where do you want to see yourself in the next 10 years?

Hopefully I’ve made some awesome music.  That is my goal.  Hopefully people like it and I get to share it with them.  It grows into a great audience for that.  I’d also love to keep acting.

Do you have a message for you supporters?

Thank you guys so much for your support.  Honestly, getting to meet you and seeing your genuine enthusiasm is so cool.  Please do say hi whenever you can.  And I’m working on new stuff for you guys.