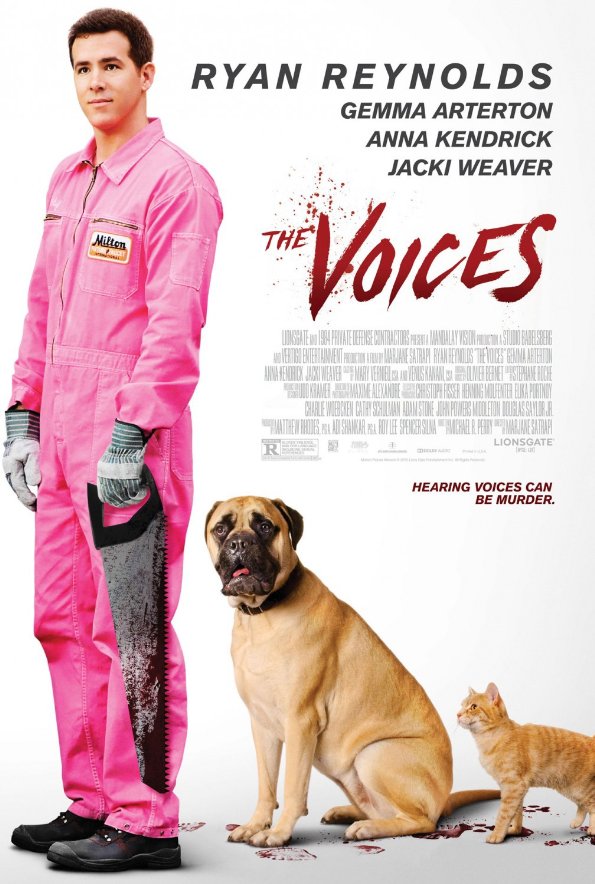 No one can say that Iranian-by-way-of-Paris director Marjane Satrapi didn’t take some big chances in her debut American film.  After all, The Voices is a serial killer comedy complete with slapstick violence, talking animals (and severed heads), conga lines, body parts stored in Tupperware, and a colorful oddball musical interlude that even included a cameo by a singing Jesus.

The only problem is that it apparently did not occur to anyone that the term serial killer comedy is something of an oxymoron.  Psychosis and homicidal rage are rarely what one could call amusing.

Therefore, despite the fact that The Voices does have some humorous bits and some interesting things to say, it makes for a bit of an uncomfortable muddle.  The violence tends to overwhelm the black humor of the film and the fanciful jokes tend to blunt the killings.

The offbeat whimsy that The Voices was trying to capture would seem to be in the wheelhouse of director Satrapi – and she did as well as anyone could be expected to – after her long history with graphic novels and then moving into animated films, such as the Oscar-nominated Perseopolis (2007) and Chicken with Plums (2011, her live-action adaptation of her earlier graphic novel).

For the record, perhaps The Voices would have captured the illusive fancifulness they are striving for better as an animated film.  The Voices also marks Satrapi’s first attempt to film another writer’s ideas, which also may have hampered her normally sure-footed style.

The Voices does look nice enough visually, but the direction of the story also clashes between the color-saturated dream landscape of the main character’s work and the dank and filthy squalor of his own home.  (And yes, I get that this was intended symbolically, but it is still a bit awkward.)

The person hearing “the voices” is Jerry (Ryan Reynolds).  Jerry is almost supernaturally perky and enthusiastic, at the same time that he is also extremely insecure.  He works at a huge pink and white factory, building and shipping bathtubs.  He is always excited about his work, also going out of the way to throw himself into any extracurricular event he can.

He also has a deep dark secret.  He is a full-blown schizophrenic and off of his meds.  When he gets home every night, he is brutally berated by his cat Mr. Whiskers at the same time that he is unconditionally loved by his big old hound dog.  Both are also voiced by Reynolds, the cat with a broad Scottish accent and the dog sounding something like Wilfred Brimley.  As a cat lover, I’m not sure why the cat has to be the evil one, but okay, I will allow the movie its conceit.

Jerry has a crush on the hot British girl Fiona (Gemma Arterton) who works in accounting.  She just as obviously has no interest whatsoever, though her cute but less stunning co-worker Lisa (Anna Kendrick) seems to be intrigued.  Mr. Whiskers assures Jerry that she is way out of his league, and sure enough, when Jerry screws up the courage to ask Fiona on a date, she ends up standing him up.

Later that night Fiona has car trouble and accepts a ride home from Jerry.  An automobile accident quickly escalates and suddenly Fiona’s head is in Jerry’s refrigerator, also speaking to him.  And she wants a friend to keep her company, an idea concurred to by Mr. Whiskers.

You get the idea.  Things start to unravel quickly.

Reynolds actually does a pretty good job in this hard-to-warm-up-to role, getting a similar jittery, eager-to-please vibe to Tony Perkins in Psycho.  Kendrick is also just terrific as a lonely woman gambling on just the wrong guy for true love.

However, as the body count rises and Jerry becomes more and more erratic, the sweetly off-kilter vibe of the early scenes gets smashed to pieces.  I give everyone a certain amount of credit for trying out some edgy material that is just soooo out there, but in the long run it really doesn’t connect in the way that the filmmakers were obviously hoping.