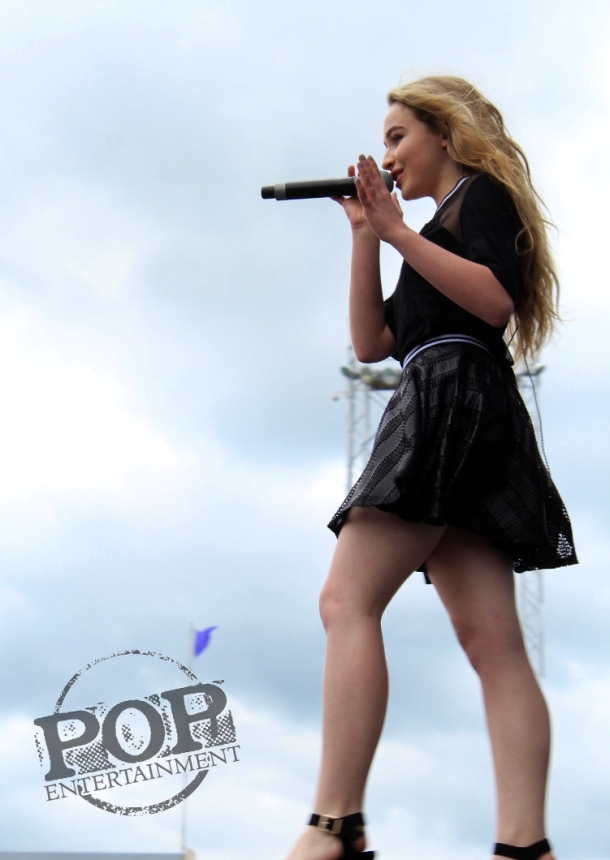 Sabrina Carpenter at the Show of the Summer in Hershey, PA.

Summer is the ideal time for outdoor music festivals.  When warm breezes meet bright sunny skies and then turn into clear, starry nights, the music can be magical.

Last weekend’s Show of the Summer in Hershey, PA was just that for easily ten thousand screaming fans, mostly ranging in age from eight to 18.  The SOTS’s lineup was packed with some of the hottest young acts of today: six acts including Sabrina Carpenter, Jacob Whitesides, R5, Jack and Jack and headliners Fifth Harmony and Shawn Mendes heated up Hershey Stadium and rocked until late in the night.

Taking time off of her hit TV show Girl Meets World, Disney Channel’s sixteen year old Sabrina Carpenter (she plays Maya Hart) flew in from LA to opened the show, performing songs from her debut album Eyes Wide Open. The crowd obviously loved her and her set, which included her band and her sister on backup vocals.  It was interesting seeing Carpenter in a new light beyond actress. 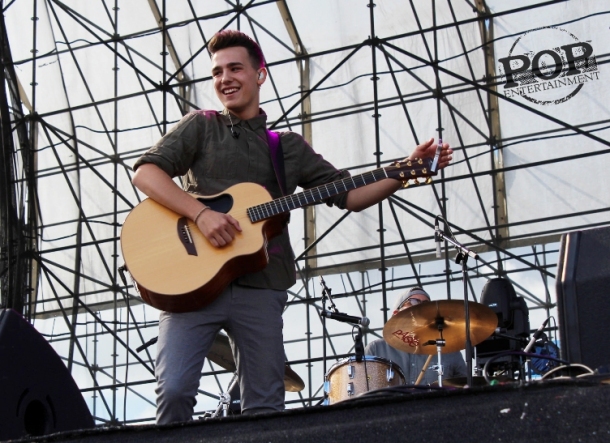 Jacob Whitesides at the Show of the Summer in Hershey, PA.

Jacob Whitesides took the stage next.  His career has exploded since we first interviewed him last summer.  He has gone from a teenage YouTuber making videos in his bedroom to an emerging musical artist.  Whitesides recently released his sophomore EP containing all original material.  Sunday night, Whitesides and his guitar did not disappoint his fans, wooing them with his growing repertoire of original music including “Let’s Be Birds.”  Logging countless miles, Whitesides has been touring a lot lately, he recently completed an opening gig for fellow SOTS talent Fifth Harmony’s Reflection Tour.  All this experience is apparent in Whitesides’ performance, which has a fresh maturity level and comfort that was apparent in his set. 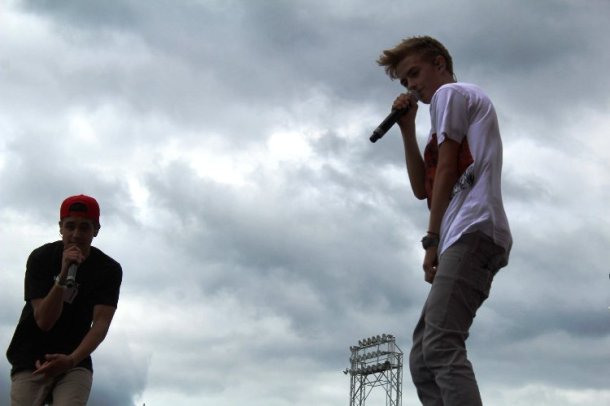 Jack and Jack at the Show of the Summer in Hershey, PA.

After chatting with us backstage about their career, their fans and their goals, (check out our new interview coming soon) internet sensations Jack and Jack – a.k.a. Jack Johnson and Jack Gilinsky – hit the stage to deafening screams.  Performing their rap/pop/hip-hop style songs like “Groove,” “Wildlife,” “Like That” and debuting their latest, “Shallow Love,” the best friends from Nebraska seemed to enjoy the experience as much as their fans.  With millions of followers on social media, Jack and Jack have built a following enviable to any performer with a lot more time in the business.  Their music was well received by their fans, who bounced and jumped to the music.  Quite frankly, I think they would have been thrilled if the two popular boys could have stood there doing just about anything. 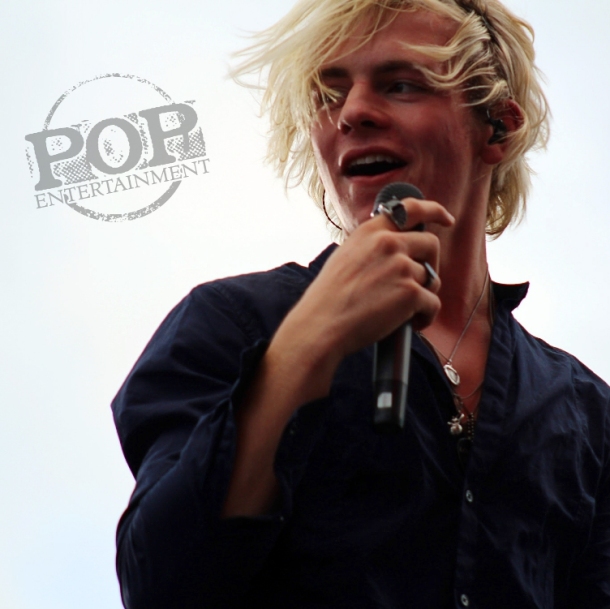 Ross Lynch of R5 at the Show of the Summer in Hershey, PA.

The four “R” siblings – Ross (actor from Disney Channel’s Austin and Ally), Riker (Dancing With the Stars), Ryder and Rocky Lynch – along with their friend/bandmate Ellington Radcliff, rocked the stage next!  Their pop/rock band R5 put on an awesome set for concert goers of all ages.  Even parents seemed to enjoy and know their music.  The group – who play all their own instruments – rocked a mixture of their past music and new songs from their upcoming album.  “Cali Girls” and “Feel Good” were two of their songs receiving the biggest applauds and screams. 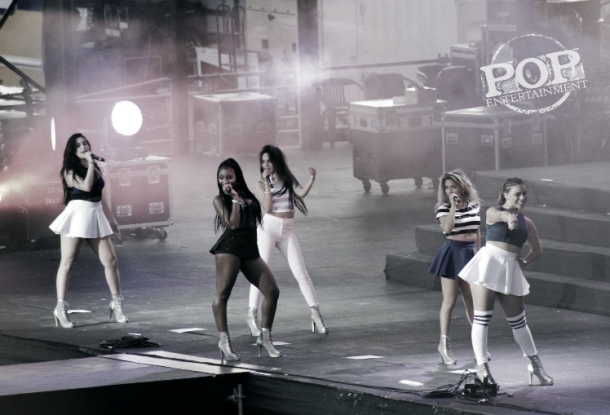 Fifth Harmony at the Show of the Summer in Hershey, PA.

The all-girl supergroup Fifth Harmony was by far the hottest act of the night!  As always, the girls of 5H gave their all to their set with an energetic performance.  While belting out their hits like “Sledgehammer” and “Worth It,” Camila, Lauren, Ally, Dinah and Normani connected to the audience with their girl-power messages and sexy dance moves, hair flips and booty shakes.  Their appearance at SOTS was a perfect culmination for a huge week for the girls of 5H, who were announced this week as the new face of the Candie’s Clothing’s fall line.  I dare say that many of the teens/tweens who clung to their every note Sunday night will be first in line at Kohl’s when the new clothing line is released. 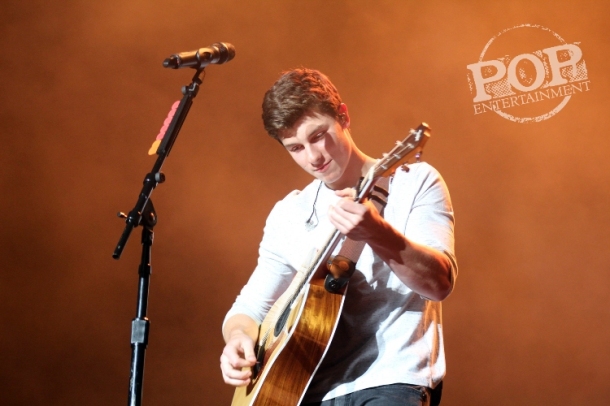 Shawn Mendes at the Show of the Summer in Hershey, PA.

By the time that Shawn Mendes walked on stage to close out the night, you could probably hear the screams and shrieks two states over.  Having interviewed Shawn twice in the past year, we know he is talented, sweet and generally shy seeming, nice guy.  However it was really awesome to see what an amazing performer he is growing into and the way his voice and performance skills have grown.  His maturation as an artist was apparent in many ways, including the one-on-one interaction with his fans.  He owned the stage while performing his hits like “Life of the Party,” “Aftertaste” and “Something Big.”

All and all, the promoters should be happy with the Show of the Summer and its lineup, performances and response from the fans.  As with all concerts these days, selling VIP undoubtedly made them a ton of extra money as nearly five hundred thrilled fans paid an additional $150.00 for a meet and greet experience with one or two of the performers.  These experiences make the concert hours longer, but so much more special for the fans.