Director Brings a New Life to Woman in Gold

With famed Academy Award winning actress Helen Mirren receiving a special honor from the World Jewish Congress in front of Gustav Klimt’s The Portrait of Adele Bloch-Bauer 1 — now housed at New York’s Neue Galerie and the basis of the film Woman in Gold — her role as Maria Altmann comes full circle.

The event featuring speeches by Mirren and Lauder, celebrates Mirren’s portrayal of Maria Altmann, the Austrian-American woman who won headlines for her legal battle against the Austrian government to reclaim five Klimt paintings including the painting of Altmann’s aunt, stolen from her family by the Nazis during WWII.

But then, British director Simon Curtis has an uncanny and outsized skill at revealing history — judging by the two theatrically release features he’s directed. The first, My Week with Marilyn, collated Colin Clark’s two diary accounts about his time with Marilyn Monroe — The Prince, The Showgirl and Me and My Week with Marilyn — into an award-winning film.

The second, Woman In Gold, follows the travails and triumph of Jewish survivor Altmann, who resolves to recover family possessions seized by the Nazis, among them Klimt’s famous painting — a portrait of her beautiful aunt.

When the Nazis shipped off her family and friends off to the death camps, they confiscated their property; she fortunately fled Vienna during World War II before they caught her as well.

Sixty years later, an elderly Altmann starts a quest with her inexperienced but plucky young lawyer Randy Schoenberg (Ryan Reynolds). This voyage takes them all the way from battling Austria’s establishment to the US Supreme Court, and forces her to confront difficult truths about the past.

In both films, the 56-year-old Curtis starts with high-profile scenarios that people understand only through broad strokes and personalizes them through carefully rendered characters. Maybe his experience in directing British actors for theater and dramatic BBC series lends itself to creating such subtle portraits.

Appropriately first screened in the Berlinale Special Galas section of the 65th Berlin International Film Festival, the film has gathered fans steadily and deliberately. But now that the Woman In Gold DVD has just been released, audiences can bring the film home for repeated viewings.

You used to work as an assistant for Helen Mirren a while back. What was that like?

Well, she said I made a very good cup of tea [laughs].

It’s been quite a while since you last worked with her.  How did you manage to cast her in this role?

You don’t have to be a genius to go off the edge and [commit] murder when you’re casting this part of Maria Altmann. There [just] aren’t as many actresses of her stature at her age [69]. We believe her as this woman that’s like herself, who has lived in Europe and then lived in California for the second half of her life. She’s an incredibly smart, talented actress. I was ecstatic when she said she would [do the part]. 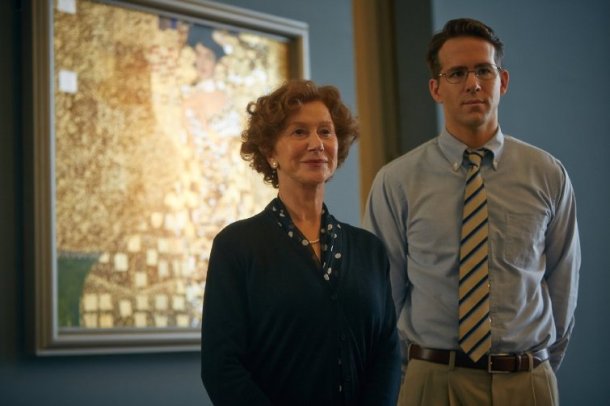 Helen Mirren and Ryan Reynolds star in “The Woman in Gold.”

You have two great leads with Ryan Reynolds uncharacteristically playing this serious character of Randy, but there a lot of other great actors in the film as well. Was it hard getting everyone on board and on the same page?

People just responded to the material. I called in a lot of favors, like getting [the classical British actor] Jonathan Pryce to play the Supreme Court judge. Tatiana Maslany [who plays the young Maria Altmann] is one of the greatest actors I ever worked with; she’s just phenomenal in [the Canadian produced, BBC America series] Orphan Black. It was thrilling for me working with all these great German actors who I hadn’t worked with before like Daniel Brühl, Moritz Bleibtreu and Antje Traue.

You made such great choices in these German actors; they were a great picks.

I was determined to have their parts played in German as well.

How was it working with writer Alexi Kaye Campbell?

Alexi did a brilliant job with the story. We had to cram a whole century into the story. Alexi did a job fulfilling that while making an accessible and entertaining film. He was a very well-known playwright in the UK, and had done a lot of work that spanned different time periods. He was brave enough to take on what is quite a dense and complex story and turn it into something hopefully accessible and entertaining.

It must have been hard to get a script together, with this complicated premise and narrative strands in different time periods?

I would say it was very hard. We went through a lot of drafts over a lot of years. It worked as it usually does. We met. I’d give notes. He’d go away and do another draft.

Tatiana Maslany stars in “The Woman in Gold.”

Shooting in three different countries, were there difficulties in raising the finances?

It was expensive to make for that reason, but both the films we made were developed by BBC Films. When I cast the leading actress, Harvey [Weinstein] and the Weinstein Company became involved. So that really took care of it. This film meant a great deal to me personally, but it also meant a great deal to Harvey personally as well. He was incredibly supportive all the way through.

As the story goes, you saw a BBC documentary on Maria Altmann and that led to you making this film. What was the fascination with her?

I don’t know. I’m from a Jewish family myself. That idea of leading on with your life but still honoring the past. The idea of this couple, Helen and Ryan, taking on the campaign, taking on the whole government, it means a great deal to me. I was so lucky with the casting of Helen and Ryan because they adore each other. They brought some humor and wit to the film that it needed.

How did your own background influence your approach to this film? How did you approach the Jewish community in order to tackle this project?

My family was in Britain before the Holocaust, so I don’t have any Holocaust stories in my family. But I obviously identify with that family and community in Vienna, that powerful, happy community that was, literally, destroyed overnight. That meant a great deal to me. I suppose there are certainly women in my family who remind me of Maria… or the other way around. I feel connected to my family’s past, but don’t know too much about it. I was very struck when I read about it. Maria’s wedding was the last big Jewish social event before the Nazis arrived in Vienna. I felt that was very powerful, that sense of this mighty family and that its days were numbered.

Helen Mirren and Ryan Reynolds star in “The Woman in Gold.”

What did you discuss with Helen about the psychology of being her character being a survivor?

Obviously neither of us met Maria, because she died before we started making the film, but there’s a lot on video tape and at the Holocaust Museum. She is interviewed talking about it as part of that documentary Steven Spielberg made [Shoah]. Also, like a lot of people that have been through something horrific, they don’t talk about it all the time. We tried to get that ambivalence. In the film she’s sometimes very keen to pursue the case and sometimes she’s keen to let it go. We wanted to get that real sort of inconsistency which would be psychologically true to that experience.

Was that prickly personality we see in the movie at all in the videos?

Not so much, but Randy Schoenberg, who was an advisor on the film [and grandson of the famed Austrian Jewish composer Arnold Schoenberg who escaped the Nazis], knew her pretty well and it clearly was her modus operandi.

What influence did you had on the visual style of the film?

I was very lucky with my Director of Photography, Ross Emery. We talked about it a lot, because the film was in three time zones. We caught the golden period that Klimt is painting in, the past in 1938, which is dark and desaturated, and the modern journey for Helen and Ryan to California and back. We wanted each to have a slightly different pallet.

What were the challenges in finding the right place with the right look?

More of the interiors were shot in London and none of the film is shot in London, so that’s quite a challenge. Vienna is like a dream place to film, they were very welcoming to us. It was phenomenal to be on the actual streets. It’s a very beautiful city. We filmed them on the steps of the actual art institute where Hitler was rejected, so it all has great meaning. Then we did a week in Los Angeles, and I wanted it to be non-showbiz LA, which I think we pulled off.

Katie Holmes and Ryan Reynolds star in “The Woman in Gold.”

How was it working with Oscar-winning composer Hans Zimmer?

Zimmer and [co-composer Martin] Phipps had never worked together before, but they’re geniuses. They identified with this story. We didn’t want it to be a sappy score, we wanted it to sound like a thriller to drive the film on. It was a great honor for me to work with Hans Zimmer.

You have a unique relationship with one of the actresses in this film, Elizabeth McGovern, given that she’s your wife. Were there hesitations in casting her in this film — she plays Judge Florence-Marie Cooper — or did you think that would keep the budget down?

It was actually very problematic, because she’s in a show called Downton Abbey, and we had to make the schedule work for both. She’s the daughter of a law professor in LA, playing a judge in LA, where she’s from, so I can’t think of anyone in the world better to cast.

Did you have a conversation with Helen about the fact that she’s married to a director — award winning Taylor Hackford — and you’re married to an actress?

We did, actually, and we agreed that a director and an actress working together while married is a wonderful and difficult thing.

It must have its daunting moments.

Does Elizabeth ever give you advice? Or do you give her advice?

Do you have a favorite painting by Klimt?

I have to say, The Woman in Gold, since we’ve [all] been looking at it for so long.

Photos 3-6 ©2015. Courtesy of The Weinstein Company. All rights reserved.