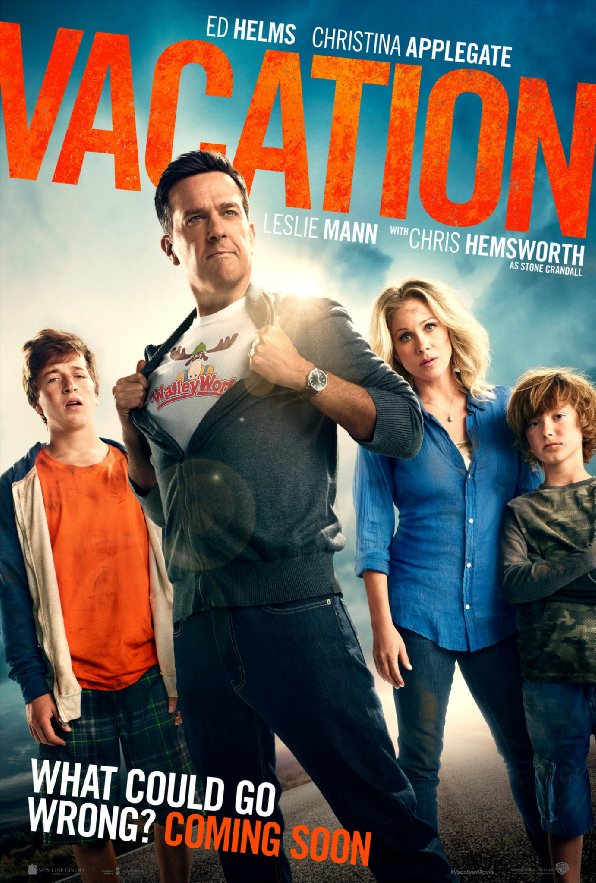 Hollywood continues mining its past in vain hopes of steering its future, but the ongoing onslaught of remake/remodels of old favorites almost inevitably mostly spawns disappointment.

This reboot of the 80s Vacation series (the filmmakers couldn’t quite decide if they wanted to do a sequel or a remake, and ended up kind of doing both at once) has a particularly tricky pedigree to live up to.

The original 1983 film, National Lampoon’s Vacation, is seen as something of a comedy classic, but honestly it’s not quite as funny as you probably remember it being.  It spawned three sequels, one of which was probably better than the original (European Vacation) and one that has become beloved, though honestly it wasn’t all that great (Christmas Vacation).

At the time the original Vacation came out, it ended up proving that the films produced by the legendary humor mag were not a flash in the pan.  National Lampoon had started out big five years earlier with National Lampoon’s Animal House, but every film they made after (such as Class Reunion and Movie Madness) would crash and burn quickly.  Actually, other than Animal House and the Vacation films, having National Lampoon in your title ended up being a death sentence for a film, though in the early 2000s National Lampoon’s Van Wilder became a fluke hit.

It was written by a then-mostly unknown screenwriter named John Hughes (who got his start writing for the Lampoon magazine), who within a few years would have written and directed such 80s classics as Sixteen Candles, The Breakfast Club and Ferris Bueller’s Day Off.

The film’s star, Chevy Chase, had left Saturday Night Live years before with the idea of being a movie star, and by the time Vacation came out he was making crap like Oh Heavenly Dog, Under the Rainbow and Deal of the Century.

So there was not a lot of expectation when National Lampoon’s Vacation was released, and fairly, the film easily overshadowed its low expectations.  Meant as a wicked satire of 80s family values, the original film became a pretty huge hit.  And yes, it was peppered through with some terrific slapstick gags, but also it was going out of its way to wallow in “shocking” humor and saccharine emotions.

Chevy Chase’s character of Clark Griswold also has taken on more dimension over the years, lingering underneath the obvious goofy doltish demeanor is a rather angry and dismissive man – the epitome of the Reagan-era sense of me-decade entitlement.  He was a man who was proud to make a living selling food additives, for Christ’s sake.  He purchased the most ugly, high maintenance car possible to take his family on their country-wide road trip to Walley World, a theme park and consumerist paradise.

Written and directed by actor John Francis Daley (Freaks & Geeks, Bones) and his partner Jonathan Goldstein (the pair had previously written Horrible Bosses and The Incredible Burt Wonderstone) with a sledge-hammer’s touch, the new Vacation takes on all the best and worst parts of the original and turns them up to eleven.  And then they just start shoveling toilet humor, vomit shots and sudden moments of gratuitous violence on top of everything.  No one ever thought that the main problem with National Lampoon’s Vacation was that they didn’t go far enough with the gross-out humor.  And yet Goldstein and Daley continue to dollop it on until the main reaction the audience has is exhaustion.

Ed Helms plays Rusty Griswold, the boy from the original film (then played by Anthony Michael Hall) all grown up with a suburban family of his own.  (Fun fact: In all five Vacation movies, the roles of Rusty and Audrey Griswold have been played by different actors each time.)  He has grown up to be a pilot, married a gorgeous woman (played by Christina Applegate, who looks disturbingly like Beverly D’Angelo, who played his mother), has two sons, an effeminate (but straight) loser of an older son and an obnoxious bully of a young son.  They live in a huge suburban McMansion (how did he get that on a local pilot’s salary?) but he feels a disconnect in the family.

So he decides the way to get everyone together is to drive across country to Walley World, conveniently forgetting what a disaster the same trip he took 30 years earlier was.  They hit the road, and just like the first time the film is just a series of disasters descending on the family.  The film is very self-consciously ironically aware of its reboot status – at one point Helms archly points out this story is different than the original trip because they have two boys compared to a boy and a girl.

They repeat or renovate many of the gags from the original film – the absurd family cruiser, the Grand Canyon trip, the model in the sports car, the car crash in the desert.  While the new film inevitably ups the ante on each of these gags, very few of them land as satisfactorily as the original.

They also have time to stop and visit Audrey (now played by Leslie Mann) and her conservative (and well-hung) weatherman husband (Chris Hemsworth) and later his parents (Chase and D’Angelo, reprising their original roles).

Whether they actually make it to Walley World is almost beside the point, though I think you can make a pretty safe bet as to whether it happens.  However, as Clark Griswold points out as his family is visiting, the people who say “it’s not the destination, it’s the trip” are crazy.  It’s all about the destination, because the trip will inevitably suck.

And sadly, this new Vacation is lots of trip and almost no destination.

One thought on “Vacation (A PopEntertainment.com Movie Review)”