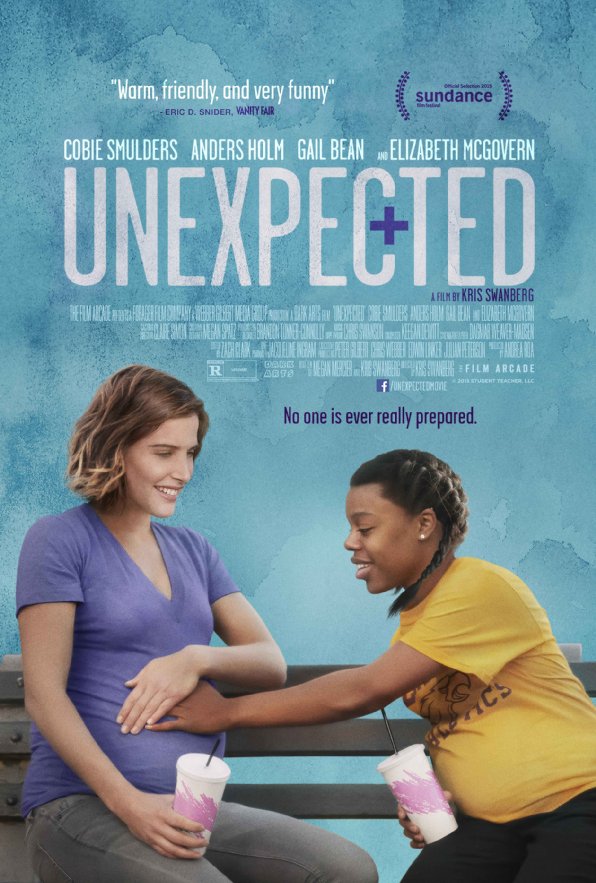 Unexpected is not merely the title of this small independent drama, it also surprisingly ends up describing the effect of the film itself.  Looking at the basic storyline the audience could be excused for reflexively dismissing it as a smug baby flick and never expecting the movie to be such a smart, insightful, funny and sad look at an odd couple friendship.

It doesn’t just stick with the typical pregnant woman movie template, though those aspects are here as well, but it is also an intriguing look at class, race, careers, women’s issues and the importance of extended family.

Unexpected is loosely based on the experiences of co-writer/director Kris Swanberg, wife of mumblecore film figurehead Joe Swanberg (Drinking Buddies, Happy Christmas).  It’s nice to see that the wife, while sharing her husband’s naturalistic style of filmmaking, is not quite as meandering and unfocused as her hubby in her storytelling.

The film looks back at Kris Swanberg’s former career as a teacher in an inner-city Chicago public school, and how her school losing funding coincided with her first pregnancy.

Cobie Smulders of How I Met Your Mother (who was herself pregnant during the filming) plays Swanberg’s doppleganger character, Samantha, a thirty-some middle classed teacher who loves teaching until she is hit with the one-two punch that the city was closing down her school and that she was pregnant.

Samantha is somewhat freaked out by the pregnancy – she and her live-in boyfriend (Anders Holm) were not quite to the point where they were talking marriage and kids – and besides her dream job has just opened up.  If she has the baby, will she be able to try to get that position?

At the same time Samantha also learns that Jasmine (Gail Bean), one of her brightest high school students, is also pregnant.  Samantha makes it her own project to make sure that Jasmine does not let the coming baby stop her from going to college.  As the two are sharing an experience, they bond and become friends through pregnancy stuff – doctors’ appointments, Lamaze classes, shopping for baby things.  Samantha tries to take care of the younger woman, but it turns out that in many ways Jasmine is more comfortable and ready for the situation than Samantha is.

The film is quietly insightful about its world and situation and has some spectacular acting — particularly coming from Smulders, Holm, Elizabeth McGovern and the totally unknown Bean, who may be the biggest positive surprise in acting.

In fact, the movie itself is a positive surprise.  Unexpected turns out to be rather unexpected, and I’m damned happy that it is.