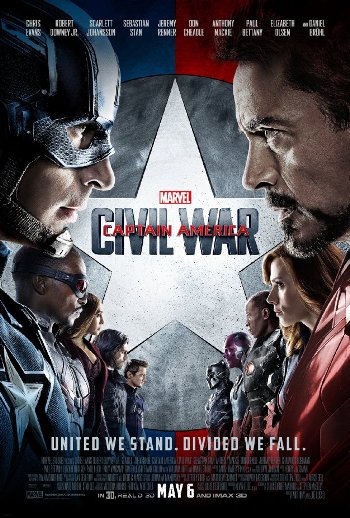 The title of this movie is Captain America: Civil War, but honestly it feels much more like a third Avengers movie.  The good Captain is almost a supporting character in his own film, in fact it seemed like Robert Downey, Jr.’s character of Tony Stark/Iron Man was on screen at least as much as the title character, if not more.  Perhaps that is just down to the fact that Stark is a much showier role than the stoic Captain, and as an actor Downey has more personality than the more blandly handsome Chris Evans.

Many of the other usual-suspect Avengers are here too, including Black Widow, Hawkeye, Vision, Falcon, War Machine, Scarlet Witch.  Sure, some of the big names in the group are AWOL: The Hulk, Thor and Nick Fury are absent, but not forgotten (in fact, each one is mentioned periodically throughout the film).  And they bring some new Avengers into the fold this time out: Spider-Man, Ant Man, The Black Panther.

I know that Marvel is building its own universe for their films, but as Avengers: Age of Ultron showed us, sometimes when there are too many superheroes in the mix all of them suffer.  The first two Captain America films told stand-alone stories, and even though Captain America: The Winter Soldier opened up to allow a couple of additional heroes to have supporting roles.  Those films were intriguing in the way they explored an old-fashioned patriotic hero who eventually became something of an anachronism in the modern world.  The Cap was also one of the lead stars of the first two Avengers films.

However, if you go into Civil War looking to find a deeper understanding of a hero out of time, you’re pretty much out of luck.

Which is not to say Captain America: Civil War is a bad film.  It has many terrific parts and is a very good action film.  It’s just a much more generic superhero beat-down film than the previous Captain America films.  But, it is done with panache.

The one through-line with the two previous Captain America movies is that it revolves around the Cap’s relationship with his oldest friend, literally the only man still around of his time.  Bucky Barnes (Sebastian Stan), who was eventually tortured and brainwashed into being the super-villain The Winter Soldier.  Though now Bucky is apparently cured of his homicidal urges, many people do not trust him and feel that he should have to pay for past crimes.

Of course, the Captain comes to his old friend’s defense.  However, when a mission goes horribly wrong and the Avengers are responsible for inadvertently killing hundreds of innocent bystanders, the American government, in the form of Secretary of State Thaddeus Ross (played with maximum over-the-topness by William Hurt) start to doubt the heroes.  They call for the muzzling of the Avengers, which forms a split amongst their ranks.

And all hell breaks loose.

To be completely honest, watching the Avengers beating the crap out of each other just feels wrong, as wrong as it felt watching Batman and Superman fighting to the death last month.  They are all on the same team, dammit!  There are enough people for them to beat on without taking on each other.  I know there is a long history of superhero rifts in the comics, but honestly it feels like a bit of a cynical gimmick.

However, as a huge blockbuster movie goes, Captain America: Civil War is made with great skill and it does look stunning.  By comparison to the thematically similar Batman vs. Superman, this movie is infinitely better.

Still, just like Age of Ultron, this movie still feels like just a bit too much – too much fighting, too many explosions, too much exposition, too much story, too many characters.  Captain America: Civil War feels like an overstuffed chapter in a much bigger story.  Which, considering the whole grand Marvel Universe movie plan, I suppose it is.  But strangely it does not feel like it could stand-alone as the previous Captain America films did.

Captain America: Civil War is the state-of-the-art for the modern blockbuster, but the whole Marvel movie experience is starting to get a bit of a been-there/done-that feel.  It’s all good, but we’ve seen it all before.