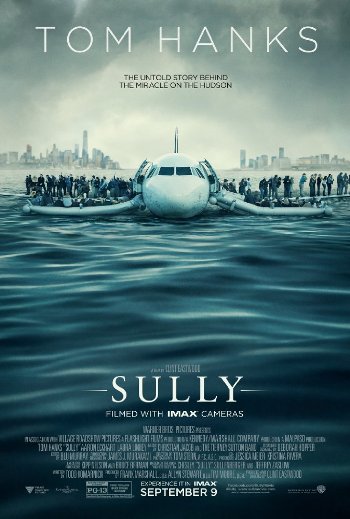 It is interesting to compare Clint Eastwood’s true-life story Sully with Robert Zemeckis’ extremely similarly-plotted 2012 film Flight.  (I don’t know if Flight was supposed to be inspired by and loosely based on Sullenberger, but I wouldn’t be surprised.)

In both films, a long-tenured airline pilot – Tom Hanks as “Miracle on the Hudson” Captain “Sully” Sullenberger and Denzel Washington as the fictional Whip Whittaker (see, even the names are similar) – are able, through skill and a bit of luck, to relatively safely crash land an out-of-control jet airliner, saving their passengers and crews (well, Whittaker lost five people) from horrific deaths.

The pilots are welcomed back as heroes, but neither feels much like a hero, both imagining the myriad of ways that their story could have turned out differently.  Then the airlines, insurance companies and the NTSB (National Transportation Safety Board) come out of the woodwork trying to prove that the “hero” pilot may be responsible for making the crash worse than it may have been.

Flight is the much darker film of the two, giving its hero some serious foibles and vices, and by quite honestly allowing its hero to be a much less likable character.

Strangely, though, even though Flight is probably the more realistic film, Sully is a much more enjoyable film.  Ironically, right after director Clint Eastwood ranted in his recent interview with Esquire magazine, “That’s the kiss-ass generation we’re in right now.  We’re really in a pussy generation.  Everybody’s walking on eggshells,” he has made the much softer, safer, more politically correct version of the story.

Which is not necessarily a bad thing.  In fact it may be a good thing.  Either way, it appears to be much more true to the personality of its lead character.

The most appealing thing about Captain Chesley “Sully” Sullenberger, even back at the height of his 2009 fame, was that he simply did not see himself as a hero.  He was a modest man who was made uncomfortable by the worldwide adoration.  He was just a guy doing his job.  When he lost both of his engines and realized that he could not get the plane safely back to an airport, instinct and years of training and led him to land the plane in the middle of a river, knowing that it would be the most likely way to save the passengers and even bystanders on the ground.  His co-pilot, crew, even the passengers, all played just as big a part in what happened.

This humble streak makes Tom Hanks a natural to play the role, and Hanks nails it.  He gets down Sully’s look, mannerisms, tones.  It’s the best performance by this multiple Oscar winner in at least several years.

The rest of the cast is also terrific, though with the exception of Aaron Eckhart as Sully’s long-time co-pilot, most of the roles are a bit under-fleshed out.  Laura Linney as Sully’s wife, alone at home, is particularly wasted.  Sometimes Eastwood stacks the decks in the story – in particular Mike O’Malley’s NTSB executive seems almost cartoonishly evil in his ambition to disprove Sully’s heroism.

However, this is a truly stirring story that doesn’t need a lot of bells and whistles.  If you don’t choke up a little when you watch the New York ferries chugging down the river to save the passengers of the plane, you have no heart.

Sully is certainly Eastwood’s most enjoyable film in several years (probably since Gran Torino in 2008), and evades the director’s recent tendency towards overlong, dull features.

Some may say that Eastwood was “walking on eggshells” in making Sully simply a feel-good film rather than really examining the darker corners and crevices of the story.  Personally, I’m glad that he didn’t.  Sometimes it’s okay to have heroes, without knocking them off their pedestals.  Once upon a time Eastwood knew that.  I’m glad to see he still remembers.