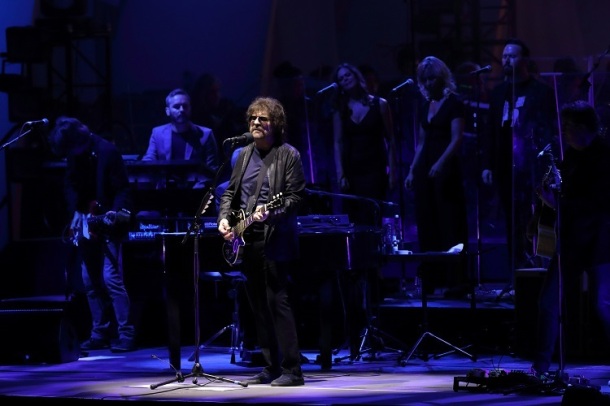 Back in 2001, Jeff Lynne was slated to tour with a new version of ELO (Electric Light Orchestra) in support of his then new album, Zoom. Unfortunately, despite a few warm-up shows, which included an episode of VH1 Storytellers, those dates never panned out.

Flash forward 15 years and Lynne and a new company of talented cohorts – which includes original ELO alum keyboardist Richard Tandy – are selling out arenas and stadiums globally at record speed. His music, once castigated by misguided music critics as calculated pop fluff, is now hailed as classic pop. In the words of the 1980 ELO song, the band is now recognized for its musical mastery “All Over the World.”

The Hollywood Bowl hosted a sold-out three night stand for Jeff Lynne’s ELO. You couldn’t have selected a more perfect venue to showcase Lynne’s expansive brand of timeless majestic pop. Backed by a stellar band and accompanied by the Hollywood Bowl Orchestra (led by conductor Thomas Wilkins), the 18,000 plus crowd in attendance rode a wave of consummate pop elation. Classic pop hit after classic pop hit unfolded in grand fashion on that hallowed stage.

Opening with “Tightrope,” culled from 1976’s A New World Record, which merged a powerful classical opening into an effervescent melodious pop explosion, the 100-minute show was a glorious affirmation of the songwriting smarts and innate pop panache of Messr. Lynne. As the night unfolded, Jeff Lynne’s ELO delivered a master class of spectacular songwriting, inspired musicianship and Holly sized arrangements.

Always a reluctant performer, Lynne was in fine voice. He proved adept and comfortable attacking his songs with precision and tangible emotion. Witness the desolate loneliness of “Telephone Line,” the blue melancholy of “Can’t Get It Out Of My Head” and Randy Newman-flavored grandeur of “Wild West Hero.”

These songs proved especially resonant and successfully tapped into a deeper well of emotion and pathos when set against the frothy pure pop transcendence of such durable smash hits also performed this evening. Just some of these jewels of the ELO songbook were “Livin’ Thing,” “Evil Woman, “Showdown,” (a song cited in a 70’s interview with John Lennon as a personal favorite), “Sweet Talking Woman,” “Turn to Stone,” “Don’t Bring Me Down,” “Shine A Little Love” and “All Over the World.”

The band’s tight rendering of ELO’s first single, “10538 Overture,” laced with its signature descending guitar passages (which Cheap Trick cribbed for the song “Downed”), was a music 101 lesson demonstrating the perfect marriage of pop, pomp and power.

In terms of the show’s overall impact, it also didn’t hurt that the visual presentation was stunning, with the Hollywood Bowl literally turned into a visual spaceship. Threads of lasers and a symphony of lights and colors worked in perfect tandem to rain down across the outdoor venue.

Racing towards the finish, “Mr. Blue Sky,” from Out of the Blue, perhaps ELO’s most beloved song, closed the set pre-encore. Its optimistic blast of jaunty Beatle-esque magic (shades of “A Day in The Life”) sent the audience into rolling waves of joyous rapture.

They returned to the stage for a raucous rendition of Chuck Berry’s “Roll Over Beethoven,” a standard in the band’s ‘70s concert performances. Lynne’s ingenious reworking of the ‘50s chestnut, weaving classical elements into the song’s meaty rock steady groove, was further enhanced by bursts of spectacular fireworks that filled the Hollywood sky. It was the perfect send off for a night of breathtaking pop bliss.