Macy’s department stores have had a special relationship with Christmas since back in the days when Edmund Gwynn was proving that the Macy’s Santa was the actual Kris Kringle in the classic holiday film Miracle on 34th Street.

The main Macy’s location in the Philadelphia area also has a long, storied tradition for the holiday.  In fact, it was intact long before the store became part of the Macy’s chain.

The store was originally the flagship store of the Philadelphia chain John Wanamaker and Company.  Originally opened in 1876 right across from City Hall, this behemoth of a store (it had six floors, though today the top three stories are mostly used for offices and storage) quickly became Philadelphia’s go-to destination for men’s and women’s clothing, furniture, dry goods and anything else they could think to buy.

John Wanamaker’s Christmas spectacular did not start for 80 years, but it quickly became a Philadelphia favorite.  Since 1956, in the Grand Court at the middle of the store, a five-story tall electrical light show celebrates some of the most beloved stories of the holidays, including “The Nutcracker Suite,” “Rudolph the Red-Nosed Reindeer” and “Frosty the Snowman.” 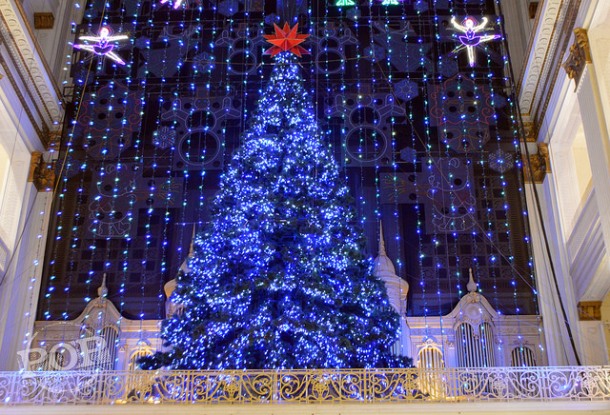 Not much has changed in the light show over the sixty years that it has been shared with Philadelphia-area children.  (Although, technically, the show has been computer-controlled since the 1970s.)  Also, the narration, originally performed by legendary Philadelphia sportcaster John Facenda, has been replaced by beloved actress Julie Andrews somewhere over the years.  Otherwise what your children are seeing is pretty much the same magical show that you saw as a kid, and your parents probably saw before you.

Wanamaker’s had also created a children’s village on the sixth floor, complete with a working train, and an area for children to shop for their parents and all the toys you could imagine.  (Please Macy’s bring back this long missed tradition!)

In 1986, after over a century as one of the biggest chains in Philadelphia, the John Wanamaker stores were sold to Woodward & Lothrop, a department store chain out of Detroit.  By 1994 that company had collapsed, and Wanamaker’s was sold to The May Company.  The original downtown Wanamaker’s name was changed to another Philadelphia institution owned by May, Strawbridge & Clothier.  Then eventually when the Strawbridge brand collapsed May turned it into a Macy’s.

However, with a historically-significant story, Macy’s has been sure to try to continue the traditions and upkeep of this storied site in local commerce.

As such, on November 18th, Macy’s had a celebration to start the annual holiday festivities off with a bang.  (Yes, I agree, it’s not even Thanksgiving yet, but much of the celebration will not start until Black Friday.)  To celebrate the arrival of the Christmas window decorations, the electric light show, and the arrival of Santa himself (as well as to whet the appetite for the Dickens’ Village celebrating “A Christmas Carol,” which will be opening on Black Friday), the store pulled out all the stops.

Gospel singer (and Tyler Perry movie favorite) Tamela Mann came to the Grand Court (right by the giant bronze Eagle, which was sadly obscured by the stage) to sing a selection of three songs: two from her current album One Way and a third classic from her songbook.

This impassioned performance was followed by the first annual performance of the Holiday Pageant of Light (which will run every two hours during store hours from November 25th until the end of the holiday season).

Macy’s also allowed a chosen few to have a preview tour of the beloved Dickens’ Village, which will be open to the public starting November 25.  Dickens’ Village is a sweet and whimsical recreation of the story of Ebenezer Scrooge, with a series of tableaus and animatronic characters returning us to Victorian London and the visits of the ghosts of Christmas Past, Christmas Present and Christmas Yet to Come. 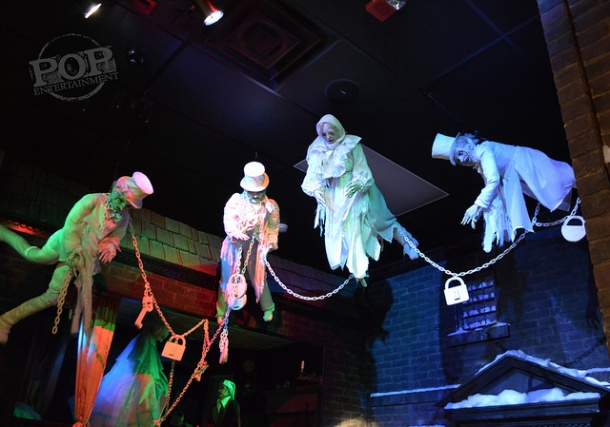 With whimsy and love we are able to watch Scrooge’s metamorphosis from money-grubbing miser to the most beloved man in the town.  We see him interacting with beloved characters from the novella including Belle, Fezziwig, Fan, Bob Cratchit, Fred and of course Tiny Tim.  The Dickens’ Village is a constant at the store just closed off from customers during the non-holiday season. 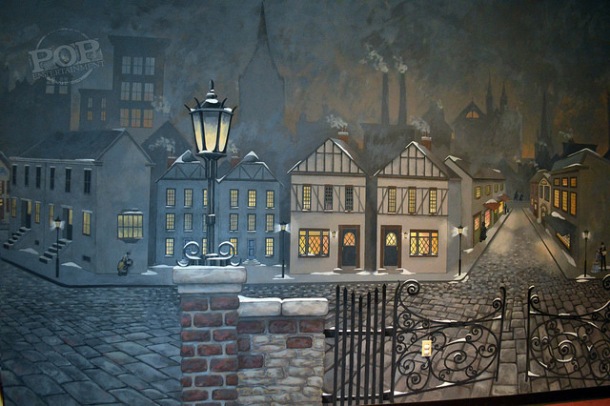 So much is changing in this crazy modern world, so it’s kind of nice to see that some traditions remain.  Get yourself (and your kids) down to Macy’s Center City before the end of the holiday season and go back in time.