Drew Brown and Ryan Tedder of OneRepublic perform at the American Airlines and Mastercard Present OneRepublic at The Fillmore Philadelphia on November 29, 2016 in Philadelphia, PA. (Photo by Lisa Lake/WireImage)

OneRepublic played at The Fillmore on Tuesday, November 29 and did not disappoint. I grew up listening to the bands’ progress and I’ve seen them come up with some hits and some not so popular songs. Now, the band is back and better than ever with a new album and a new sound. Here are some of my observations form the concert…

It feels like nowadays it is hard to get a genuinely good band to play live and put their soul into their performance. To my surprise, Ryan Tedder, OneRepublic’s lead singer holds many talents. Not only does my new man crush hit all the high notes but he rocks a tambourine and plays his heart out on the piano. Brent Kutzle, the bands’ cellist, began to play Secrets and the crowd went wild. It’s live music and talent like theirs that has guided this bands’ success over the years.

Unfortunately, the turnout at the Fillmore was disappointing, taking into consideration it was a Tuesday night and the show was a special promotion by American Airlines and MasterCard. However, everyone that did attend danced and sang along as if there was a full house. It is rare to get good energy from the entire crowd nowadays. Because the turnout was not huge, the concert felt a lot more personal, which added to the vitality of the night.

Ryan Tedder should be a Comedian

Intermittently throughout the amazing performance put on by the band, Tedder would intervene with hilarious words of wisdom and jokes. The band did an excellent job keeping the crowd’s interest throughout the night.

OneRepublic released their latest album on October 7, 2016, almost two years after their last album. The sound is completely new, but definitely did not disappoint. The new album features other guest artists like Peter Gabriel and Santigold, which Tedder was very excited about. They played one of their new songs “A.I.,” saying “we know it’s a weird song.” The new songs stayed true to the bands’ iconic sound, but in a way that was new and reinvented. 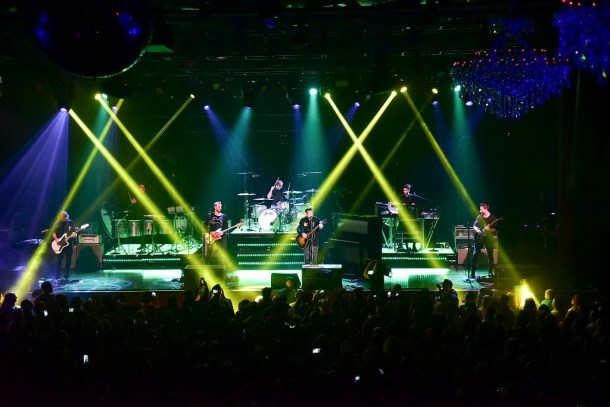 I can’t forget about the songs that put OneRepublic where they are today; they played them all! I admit, there may have been a few tears during “Good Life,” which was to be expected with Tedder’s long-drawn high notes and soulful performance. Overall, my experience covering the concert will not be forgotten and I can say that I have re-discovered my love for OneRepublic.

One thought on “OneRepublic – The Fillmore – Philadelphia, PA – November 29, 2016 (A PopEntertainment.com Concert Review)”