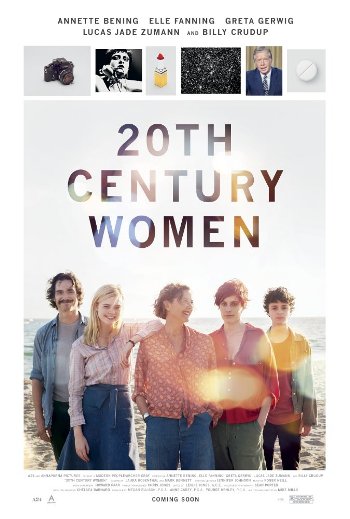 A few years ago, when I interviewed director Mike Mills about his last film, Beginners, he said that the story about a grown son whose father came out of the closet in his 70s was strongly autobiographical.  He said he looked at the film as a loving tribute to his father.

There was a supporting role based upon his mother in Beginners, a loving but eccentric woman who never quite seemed to realize she was living up to her role – both as mother and as a wife – but was loving and invested in her own off-beat way.  However, that movie was about father and son, and she was a bit of a cipher in the few flashback scenes that she appeared in.

Now, 20th Century Women is Mills’ more complete tribute to his mom.  While I did not get the chance to speak with Mills about this film, I would have to assume that like Beginners, it is very much based upon the filmmaker’s life and memories.

20th Century Women is very much a coming-of-age film.  Jamie (Lucas Jade Zumann) is a 15-year-old boy growing up with his divorced mother Dorothea (Annette Bening) in a sprawling-but-dilapidated manor in Santa Barbara, California in 1979.  Dot is very much an “it takes a village” type, inviting people to dinner and even to live with them in return for repairs on the house and car or taking care of Jamie.

Since there is no father in his life and Dot feels a little old and out of touch, she decides to have two other women in his life help raise him by committee.  These are feminist boarder Abbie (Greta Gerwig), a 24-year-old aspiring photographer, and Julie (Elle Fanning), a beautiful-but-conflicted teen who is Jamie’s best friend, but does not return his obvious crush on her.

I had a complicated reaction to 20th Century Women.  I still feel, like I felt watching Beginners, that Mills is an extremely gifted director.  Mills used many similar tricks – news footage, clever narration, off-kilter storylines and dialogue – as he did in Beginners.  He has a terrific visual eye, is able to relate his story into the world he set it in and has a terrific imagination.

Yet, I also found 20th Century Women often predictable, overly melodramatic and more than a tiny bit clichéd.  And, honestly, the character based upon Mills was the least interesting one in the movie.  It’s of note that even though Jamie is in most scenes, Zumann is listed fifth in the cast listing, which does not all come down to name recognition.  This is definitely unlike Beginners, where Ewan McGregor’s character was able to hold his own amidst such intriguing characters as his offbeat girlfriend (Mélanie Laurent) and his dad (the wonderful Christopher Plummer).

The truth is, I wanted to like 20th Century Women so much more than I did.  I’ll even be the first to acknowledge that I’m in the minority of film writers, the movie has been getting wonderful reviews.  I respected 20th Century Women in many ways, but I can’t say I really enjoyed it.

Much of this comes down to Mills’ screenplay.  The sure and realistic dialogue of Beginners is missing here.  While much of the dialogue in 20th Century Women is extremely smart, pithy and well-written, it often feels too polished, too written.  It really does not feel like something that real people would say.  It also feels quirky just to be quirky.  And sadly it was often predictable: I can think of at least one moment that I recited Billy Crudup’s reply line in my head at least 20 seconds before his character said it on screen.

Part of the problem, perhaps, is that the film is about growing up in the 70s.  I also am a child of that decade, and honestly the world of this film felt very little like the 70s that I experienced.  Sure, I realize that everyone grew up differently and had different experiences of the era, but too much of 20th Century Women feels like a hip and worldly man of the new millennium trying to graft his current tastes and beliefs on his childhood to make the character hipper and more worldly.

Just on a very basic level, he’s supposed to be a young teen trying to decide who is better: Talking Heads or Black Flag.  Now, in my mid-teens I slightly knew who Talking Heads were, but I didn’t have a clue about Black Flag.

That said, there is much in 20th Century Women to enjoy, particularly Annette Bening’s spectacular performance.  It can, and should be thought of around Oscar time.  Elle Fanning and Greta Gerwig also do fine work.  Mills also continues to show skill and growth as a director.  He may just want to make his script a little less precious next time out.