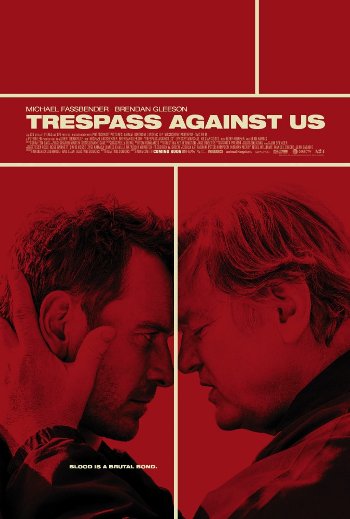 You can be relatively certain when a film takes its title from a line in a ubiquitous piece of religious doctrine like “The Lord’s Prayer” that you are in for one of two things: a full-blown religious spectacle, or an ironic (and usually violent) look at sinners who have fallen from the true faith.

Not surprisingly, Trespass Against Us falls squarely in the second camp.  Trespass Against Us tells the story of the power struggles and familial bonds amongst a band of outlaws and petty criminals and their families who live on a small decrepit commune in a compound of old mobile homes deep in the boonies of England, not too far out of the town of Glouchestershire.

The two heads of this clan are played by Brendan Gleeson and Michael Fassbender, so you know right off the bat that the acting is going to be spot on.  Sadly, this fine acting is the main reason (probably the only reason) to recommend this otherwise oddball character study of low-lives and degenerates on the outskirts of society.

The term low-lives is not an exaggeration here.  Rarely have I seen a film made about such ineffectual, proudly stupid and unhinged, undisciplined criminals.  They put the petty in the term petty thieves.  Most of them don’t give a fuck about anyone; not their neighbors, not their friends, not their family, not their pets, not even themselves.

Their crimes feel more like botched improvisations than actual plans.  They don’t appear to be making any significant profit from their wave of anti-social behavior.  Certainly not from their living conditions: they are not exactly living high off the hog from their ill-gotten gains.

And this group has apparently been doing this kind of inconsequential stuff for generations now, at least three that are mentioned, with the next generation of children seemingly being groomed for a fourth.

The leader of the clan is Colby (Gleeson), a proudly illiterate and anti-intellectual man (he more than once expresses a firm belief that the Earth is flat) who rules his rag-tag group with an iron fist.  He seems to fancy that he has turned crime into a form of anti-establishment rebellion, but the truth is that he is just a power-hungry and very small man.

Colby’s son Chad (Fassbender) has become his best shot in keeping his tattered legacy together, particularly since his other son has been sent off to jail.  Chad is a little more thoughtful about his place in life – having grown up in this world he is used to the casual callous violence and disrespect for life, however he is ashamed of his inability to read and write and would prefer to disappear with his wife and two children to start over in a normal middle-class existence.  Unfortunately, he has never really been able to stand up to his father.

We meet this motley crew as they are hunting rabbits through a British meadow with an SUV as their weapon, and they don’t grow any more likable as the film goes on.  The dialogue is a long stream of barely intelligible grunts punctuated with a nearly constant stream of cursing.  None of the characters – not even Fassbender, who is supposedly trying desperately to go straight, or his maternally protective wife – is allowed any human empathy.  Even a mentally ill and dangerously violent character is portrayed as an object of scorn and ridicule throughout the film.

You may be wondering what fine actors like Fassbender and Gleeson are doing in such an oddly muddled film.  I know I certainly was.  However, we’ll have to assume it’s a strange misstep in two otherwise mostly honorable acting careers.  We’ll just have to forgive them their trespasses.