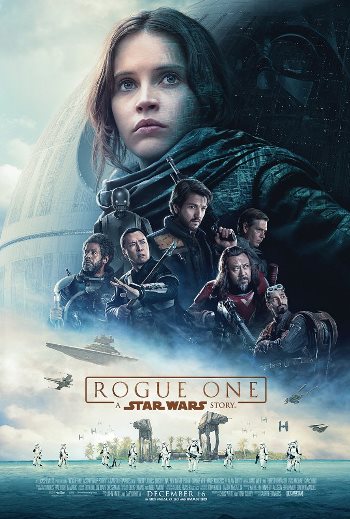 Rogue One: A Star Wars Story

Who would have thought that having mega-conglomerate Disney buy the Star Wars franchise away from creator and series mastermind George Lucas would turn out to be the best thing to happen to the series in decades?

Last year, Disney released The Force Awakens, the long-awaited seventh chapter in the Star Wars saga. It was by far the best piece of Star Wars filmmaking since The Empire Strikes Back in 1980, and that includes not just the four official saga movies, but additional animated films and series, video games, TV spin-offs, etc.

Rogue One is also a spin off, not part of the official series. However, it shows that The Force Awakens was not a fluke. Rogue One is made up by a bunch of smart fanboys (and girls) who understand what makes these films work in a way that Lucas had long ago lost touch with. No more dull sequences of negotiating space mining treaties, the new films are more interested in slam-bang action sequences about the fight between good and evil.

Rogue One is a standalone film in the Star Wars universe, though what happens here has extreme importance to the progression of the saga. It is something of a prequel to the original 1977 Star Wars film (since rechristened Star Wars: A New Hope).

Remember the climactic scene in A New Hope in which Luke Skywalker shot a laser into a vulnerable area of the Death Star, starting a massive chain reaction that destroyed the huge space station? Did you ever wonder how the rebel alliance knew that shooting in that specific spot would blow up the Death Star?

Rogue One tells that story.

Now, truthfully, on paper a story about stealing the blueprints of the Death Star does not sound like it would be that much of a crowd-pleaser. Well, luckily this is not all done on paper, because Rogue One turns out to join The Force Awakens as the two most viscerally thrilling pieces of Star Wars art since Empire Strikes Back. Rogue One is also arguably the darkest, most adult entry in the series. It’s a good combination, the Star Wars universe wears its maturity and pathos well.

Felicity Jones plays Jyn, a young woman who as a child saw her father kidnapped and her mother killed by the Empire, because they felt her father Galen Espos (Mads Mikkelsen) was a vital component in creating the ultimate weapon, the Death Star. With her father being held by the villainous Orson Krennic (the terrific Ben Mendelsohn of Bloodline), Jyn has had to care for herself and hide her identity, eventually ending up in an Empire prison. She has become jaded and has no political leanings – her only concern is survival.

All changes when rebel fighter Andor (Diego Luna) frees her from her captivity. There is a rumor that a former Empire pilot is trying to deliver a message from Galen to a legendary rebellion figure who brought Jyn up, Saw Gerrera (Forest Whitaker), a brilliant man whose increasingly fragile mental state has estranged him from the rest of the rebellion. If Jyn gets Andor in to see Saw Gerrera, the rebellion assures she will be allowed to go free.

However, when she sees the holographic message from her father, Jyn is dragged deeper and deeper into the cause.

I won’t go into further detail, because a great deal of the excitement of Rogue One comes in experiencing it fresh. Let’s just say it’s all a good sign that the series is back on the right track.

Of course, it goes without saying that the special effects are incredible, though the computer graphics do lack the grimy immediacy of the first Star Wars films.

One piece of special effects art is particularly impressive. Through computer effects the filmmakers brought long-dead actor Peter Cushing back to life to portray his Star Wars character of Grand Moff Tarkin. At first the effect is stunning, it’s like watching a ghost, though eventually when you watch closely you can pick out the fact that it is indeed a computer avatar performing these lines. (Or at least a CGI Peter Cushing face covering up a different actor’s face.) Sadly, a much shorter sequence where they showed Princess Leia as a young 20-ish year old looks much more blatantly fake and computer generated. (The late Carrie Fisher was still alive when this film was made, but had obviously aged and changed in the 40 years since the first film.)

Disney has said that this is only the first of a series of stand-alone movies to fill out the mythology of this universe. If Rogue One is a representative example, this will finally be a good thing, not like when George Lucas was trying to squeeze every ounce of blood out of the Clone Wars stone.

For the first time in decades, I’m excited about where this series is going, and that’s a good thing. Thanks, Disney.