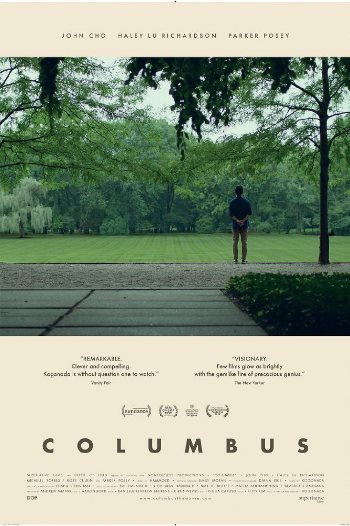 Who knew that the small town of Columbus, Indiana, was a mecca for modern architecture? This is just one of many surprises to be found in the low-key character drama Columbus.

It is a sweet, thoughtful film about two people in very dissimilar situations meeting by chance and becoming friends – perhaps more – while coming to terms with their lives, their loves, their aspirations, their defenses, their differences and their realities.

It is a smart and insightful look at the world. Not just the leads are intriguing, but many of the supporting characters have surprising depth as they trundle through life. Some are aware of the importance of the town’s style and are drawn to it. Others overlook it, but still interact with the structures. In fact, the architecture and the town are as important to the story as the characters.

The buildings all have clean, smooth, modern angles, while the peoples’ lives have all sorts of odd curves, indentations, structural tension and instability.

The story revolves around Jin (John Cho), the adult and estranged son of a famous Korean architect. Jin moved away from his family years ago, but he is brought back into the fold when his father is stricken before a lecture in Columbus and falls into a coma, likely to die.

Jin is called to Indiana by his father’s colleague (Parker Posey) – and apparent girlfriend – to stay with his father until the man finally recovers, or passes away. However, as the coma stretches out over days and weeks, Jin comes to question what he is doing there.

While passing the time to find out if his father will recover, Jin meets recent high school grad Casey (Haley Lu Richardson), an “architecture nerd” (as he calls her) who had been planning on attending his father’s lecture. Casey is working at the local library, foregoing college because she feels protective of her recovering drug-abuser mother (Michelle Forbes) and worries about moving away.

They recognize kindred lost souls and start having a series of conversations in which they discuss their lives, their families and architecture. (Jin has rejected his father’s art as part of his rejection of the man, but Casey tries to open his eyes back up to the artistic majesty of buildings.)

And that is pretty much all that happens – intelligent people speaking as they discover a city and discover themselves. While there is a flirtatiousness in their relationship, many factors stand in the way – including the fact that he is at least a decade older than her, the fact that he is only there for so long, and the fact that an opportunity has opened up for her to follow her dreams if she can only bring herself to move away from home.

The characters in this world often speak to and at each other without saying what they mean. For example, Casey’s best male friend (Rory Culkin) gets into a fascinating, detailed discussion with her of the relative attention spans of book lovers like them not being so different than the attention spans of gamers. It’s an interesting, nuanced argument, but his main point – that he is interested in being more than just her friend – is not clear enough that she picks up on it. Yet, when she tries to open herself up to the guy, he just as subtly draws away.

Korean director Kogonada – this is his first feature film, but he is a film critic and has made many video essays about cinema – has an interesting look and feel to his film. Despite being filmed in the heartland, it has a distinctively Asian, or slightly European, cadence. Much of the film is shot in long shots with the characters dwarfed by the structures around them. It is also highly reminiscent of Richard Linklater’s work, which is no real surprise as Kogonada did a video celebrating his masterpiece for the Criterion Collection Blu-ray of Linklater’s Before Sunset trilogy.

As far as the acting, it is spot on. Cho, who is better known for comedies like Harold and Kumar Go to White Castle, gives a nuanced and assured performance. Every bit his equal is Richardson, who has impressed in a series of teen supporting roles (Edge of Seventeen, The Bronze, Split), graduates to both lead actress and adult roles here. Expect to see lots more of her. Supporting actors like the always reliable Michelle Forbes and Rory Culkin also shine.

Columbus is certainly not an action-packed film, but it is fascinating in its smart and empathetic look at people. In a world where intellectual curiosity is all too often mocked and feared, it is nice to see a film which is populated by smart, probing, complicated characters.