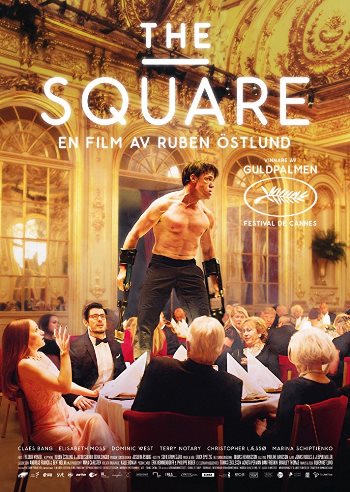 Screened at the 2017 Philadelphia Film Festival.

Director Ruben Östlund impressed a few years ago with his deceptively deep breakthrough film Force Majeure, a dark comedy/drama about a couple whose marital cracks are magnified after the husband fails to try to save his family during an avalanche at a Swiss chalet, and what happens when it turns out to be something of a false alarm and they all survive. It was an incisive exploration of family relations, sexual roles, heroism and societal expectations.

His follow-up, The Square, takes a similarly vicious sharp blade to the world of modern art, starting off as a truly visionary satirical work, but honestly running out of steam well before the two-and-a-half-hour run time has passed.

The basic premise of The Square is very simple. The Royal Museum of Stockholm is converted to the “X-Royal” Museum, a temple of modern art dedicated to the concept that anything and everything can be art. However, if anything can be art, is anything really art?

The newly rebooted museum features exhibits like a room full of piles of gravel (which the cleaning crew regularly messes up in overnight cleanings), a huge sculpture of… something… which hangs from the roof and makes obnoxious clanging sounds, and giant neon signs which tauntingly read things like “You Have Nothing.”

The main new piece of art is the title exhibit, though, a large square in the sidewalk, bordered by lights, which is supposed to be a safe space for contemplation.

The film follows the adventures of the museum’s curator, a slick and handsome guy named Christian (Claes Bang) who is put in charge of selling this new vision of the place to the public.

Early in the film, Christian walks out into the museum’s courtyard and hears marketers asking passersby “What would you do to save a life?” as they walk past the motionless sleeping bodies of homeless men and women.

So, yeah, this isn’t going to be a subtle film.

The subtlety continues to spin out until we eventually reach a scene that starts off somewhat fascinating, but way overstays its welcome, in which an aggressive artist terrorizes a rich charity dinner.

Other oddball scenes include an artist’s press conference being interrupted by the obscene screams of a man in the crowd, but everyone there is afraid to interrupt him or throw him out because he may have Tourette’s syndrome.

And that’s not even taking into account many of the side-plots, like when Christian’s wallet and phone are stolen and he and his assistant come up with a hackneyed idea to get them back, which crazily works, but also offends everybody in an entire apartment building. Or the insanely offensive advertisement that a couple of millennial museum workers put together, just to be edgy.

American actors Elisabeth Moss and Domenic West pop in from time to time as a smitten journalist and a pretentious artist.

There are lots of funny – if slightly obvious – jabs at the pretentions of the art world. But like I said earlier, it eventually just goes on much longer than it need. The points were made, why keep beating on them?

Still, The Square does have some of the most thought-provoking and oddly funny scenes you’re going to find.

You’ve got to give writer/director Östlund this – he may overreach sometimes, but the guy is fearless. In some ways, The Square is as pretentious as anything in its fictional museum, but it is also a savage take down on high society. It could have used some pruning, but I’m glad I saw it.