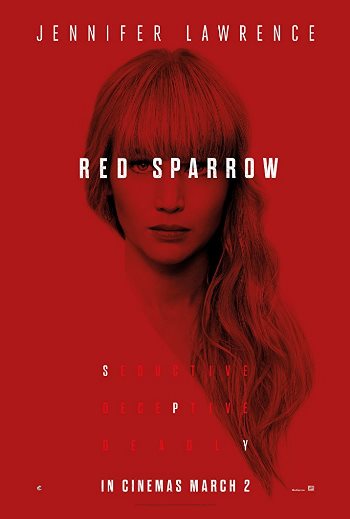 My future film-student teenager typically attends screenings with me and even helps with some of my reviews. (Thanks, Leni Paul!) Thankfully, my mom sixth sense kicked in for Red Sparrow and I brought an adult friend instead.

This 2-hour, 19-minute movie is one of the hardest earned R-rated movies that I have seen lately. It includes full-frontal male and female nudity, sexual aggression and rape, extreme violence, and, well, even in this world climate, political stereotyping that is hard to swallow.  Even with all of this shock value, the first half of the movie was extremely slow moving. It didn’t begin to improve until the midway point with a much-needed cameo for some tension relief.

Set in Russia, Red Sparrow centers on leading lady Jennifer Lawrence in the role of Dominika Egorova. Dominika is the ballerina niece of Vanya Egorov (played by Matthias Schoenaerts), a government official known to have shady dealings.  When Dominika’s ballet career is derailed, she is reconnected with her estranged uncle and left with no choice but to accept work that he offers in order to continue to care for her ailing mother.

As with most shady dealings, this sends her down a dark and twisted path. This path leads directly to the Sparrows – Russia’s secret organization of government-sanctioned sex workers, trained to manipulate secrets from their marks.

While Red Sparrow’s plotline is as seedy as it sounds, it attempts at artistry with its accents, dance, and drama. Jennifer Lawrence pulls off a strong performance as Dominika – she is strong, beautiful, with a believable enough Russian accent and the grace and presence of a prima ballerina.

Lawrence trained for four hours a day, five days a week over three and a half months in order to have the look and feel of a prima ballerina. For me, the work paid off. I could not tell where body double Isabella Boylston (principal for the American Ballet Theater) took over (spoiler, we only see Lawrence from the waist up – talk about good editing!) She plays the role with confidence and was (mostly) believable in the role.

Unfortunately, she is paired with Joel Edgerton, sloppy and unbelievable (not in a good way) in the role of CIA agent Nate Nash. Together, there is little chemistry and little added to the storyline. Any actor could have filled that role and, in my opinion, done a better job. The Nate Nash character is already written to be trustworthy and earnest, but there is little charisma that Edgerton adds to the role.

Jeremy Irons and Joely Richardson have small roles that they play well, but the attention-grabbing cameo belongs to Mary-Louise Parker, who adds humor and life back into the film, recapturing the audience’s attention. The movie really improves at the midway point. Unlike many films that start well and lose steam throughout, Red Sparrow really comes to life in its second half, with plot twists and a better focused story.

In spite of the improved second half, Red Sparrow is not a movie that I would recommend to most friends. Nor will I watch it more than a second time, and only then to look for clues to the plot twists. The violence really took center stage in the storyline. I wish the directors took more time developing chemistry in their lead couple. Maybe they should have placed a call to Bradley Cooper.