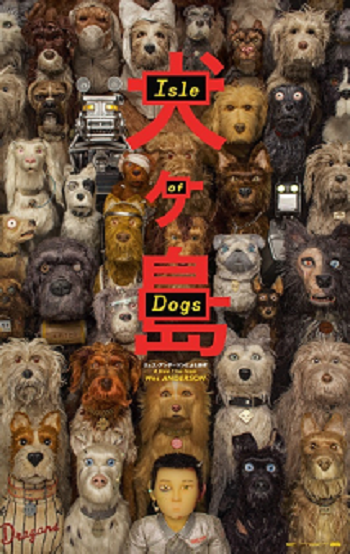 The Ritz East was packed for the Tuesday preview of Wes Anderson’s Isle of Dogs. Quirky, symmetrical, ironic, detailed: Wes Anderson has a film style all his own and the fan following to match. I am one of those fans. Three summers ago, I dragged my daughter and sister on a wild goose chase through the streets of Milan, Italy in search of Wes Anderson’s bar. I stand behind my decision and my fandom more than ever after watching Isle of Dogs.

Following in the footsteps of Fantastic Mister Fox (2009), Anderson has returned to the world of stop motion animation for Isle of Dogs. Like any good Anderson film, there is a hero (Atari Kobayashi – a 12-year-old boy voiced by Koyu Rankin), a heroine (foreign exchange student Tracy Walker, voiced by Greta Gerwig), a villain (well, there are a few villains…see below), lots of detailed screen notes to follow (bring your good glasses!), and dry humor. As the movie title promises, this movie also includes dogs – lots of dogs – that must make the most of a bad situation on an island built on trash.

I was worried when I saw the original trailer for this film – worried about cultural appropriation; worried about white-washing. There are a number of critiques out on the web talking about this. I will leave the arguments and critiques to those more knowledgeable on the topic. What I can tell you, as an amateur reviewer, admitted fan girl, and citizen of the world who cares about cultures and human stories, the movie felt, to me, like a love letter to Japan and its culture.

The movie’s guidelines are set from the start. All human voices are spoken in their native tongue, with translation when appropriate by human translators or electronic written translation. All dog voices are in English. I loved hearing the Japanese language, and when not translated, loved the characters trying to figure out what the other was saying with body language and context, as so many of us know from our travel experiences. I loved hearing the drum-heavy soundtrack and seeing sumo wrestlers on the screen; watching the science-focused culture working to find a solution to the canine illnesses and the radical, worldly, young students rising up to protect what they love.

Most of all, Isle of Dogs is a love letter to pets and our relationship with our pets.

Villains Mayor Kobayashi (voiced by Kunichi Nomura) and the particularly evil Major Domo (voiced by Akira Takayama) are cat people in every respect and solidify their city’s cat society with the exile of the dogs, blaming their exile on dog flu and canine cough.

Okay, let me restate, Isle of Dogs is a love letter to dogs and the bonds formed through our relationship with our dogs. Atari represents every dog lover with the reciprocal, boundless affection that a 12-year-old boy and his dog have for one another. Anderson captures both the human and dog spirit in his characters interactions and dialogue.

Now please excuse me while I go hug my dog….