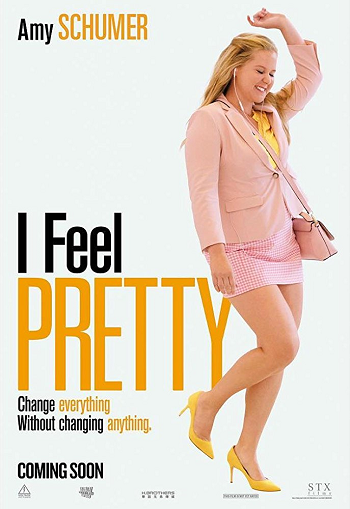 To paraphrase Maria from West Side Story in the song that gives this movie its title: Is I Feel Pretty oh so pretty, and witty, and bright?

Bright? Surprisingly, sometimes it really is.

I mean, yeah, the storyline is kind of dumb. It’s a feel-good girl-power (woman-power) film that rides along confidently on a fearless and mostly very funny performance by Amy Schumer.

Is the performance better than the movie itself deserves? Perhaps it is. But the film is all the better for it. Amy Schumer pretty much carries I Feel Pretty on her shoulders. She is not the only reason that the movie is worth seeing, but she is a big reason. And thanks to her funny and surprisingly vulnerable performance, I Feel Pretty is time well spent.

Schumer plays Renee, a slightly big girl lost in a Manhattan filled with models. She is a little unnaturally obsessed with her looks. She is insecure with her body and her face, all too aware that men seem to look past her, trying a little too hard to get noticed, wishing for just a little while to be able to know what it is like to be one of the beautiful people.

She works for one of the biggest beauty companies in New York, but even there she is hidden – she works on the skeleton staff of the online site, in a tiny office in Chinatown, not the company’s gleaming tower in Midtown. (No, it’s never really explained why a company which has its own skyscraper can’t find a tiny corner office back by the bathrooms to stick the two members of the website staff, instead of putting them in some funky rat-trap 70 or 80 blocks away downtown.)

She dreams of someday working in the main headquarters – really, the idea of being the receptionist is a dream job for her – even though, as she readily explains, she already works for the company and would have to take a pay cut. However, her insecurity extends to her career. She sees the slumming models working the front desk at the business, and thinks she has no chance.

Her life changes completely through an accident. While at a gym spinning class, she falls and hits her head. When she regains consciousness, she looks in the mirror and sees herself as stunningly beautiful, in fact unrecognizably pretty, even though no one else sees this change. (Yeah, I didn’t quite get how that works, either.) However, through this delusion, her confidence spikes, she becomes fearless, her natural charm comes through, and she gets a cute new boyfriend, her dream job and the attention of her bosses, who are thinking of starting a new line for “everyday” women and see her as their window into that demographic.

I never quite understood this basic storyline concept – a bump on the head causing someone to see a totally different looking and more beautiful version of a person than everyone else sees – 15 years ago when the Farrelly Brothers used a variation of it in Shallow Hal. I’m still not sure I buy the central conceit of the movie. However, if we are going to enjoy I Feel Pretty’s positive attributes, we’ll have to give them a little wiggle room on their fantastical premise.

It gets a little sappy towards the end, but that’s okay, too.

The most important thing is the I Feel Pretty is a whole lot funnier than you expect it will be. In the end, that’s all it was looking to do. If you give the movie a little bit of slack, you’ll probably be surprised how much you enjoy it.