Life in the Convention Lane

Catching up with Thomas Ian Nicholas on the floor of the Philadelphia Wizard World, he hasn’t changed all that much from the kid who starred in the 90s classic films Rookie of the Year and American Pie. Whether playing the fantasy role of a little boy playing in the big leagues for the Cubs, or as the perfect boyfriend looking to lose his virginity with his buddies on prom night, Nicholas hit the pop culture zeitgeist.

Twenty-five years on from the release of Rookie, Nicholas is still at it, not only acting regularly but also as a musician leading the Thomas Nicholas Band and as a film producer. He’s currently got a few movies in pre-production (both as an actor and as a producer). He did a voice in the recent animated film Bilal. He also starred as Walt Disney recently in the film Walt Before Mickey (currently available on Netflix). Because of this connection, he is doing a Disney trivia contest at the convention.

We caught up with Nicholas at his booth at Philly’s Wizard World the other day and had a nice talk about his career and working the convention circuit.

I found it interesting that this year you’re hosting a Disney trivia contest at Wizard World. How long have you been a Disney fan?

I mean, who isn’t a Disney fan? Obviously, we don’t just focus on Walt’s early life and career. That would give me an unfair advantage. Usually [we do it with] Jon Heder, who has done a lot of Wizard Worlds with us this year. Usually Jon grabs half the audience and I grab half the audience, and we compete with the other. This one Jon is not here, so it will just be me against the audience. If it was Walt’s early life and career, I would win, but we have to give them a bit of a fighting chance.

Do you tend to ask more about the movies, or the animation, or the memorabilia, or the parks, or what?

Anything Disney related. We do information about the parks. Live action Disney. Obviously, animated Disney. We try to cover a little bit of everything during the course of the hour.

You played Walt Disney in the film Walt Before Mickey. What was it like to play such an iconic character?

It was amazing. It was a complete honor. I had a lot of time to prepare for the role. They offered me the opportunity to play Walt. I, of course, said yes. And they were, “Great, you start next week.” (laughs) So, about five days after I got the job, I was flying to Florida to start shooting.

How did you play him?

I merely just focused on his drive and his energy because I watched Saving Mr. Banks and, of course Tom Hanks was great, but that was Walt after he had done everything. This was Walt on the cusp, and when he was much younger. I just focused on his charisma and drive and what would actually make someone persevere through all that adversity and failure.

Speaking of playing iconic filmmakers, I hear you are playing Martin Scorsese in James Franco’s Zeroville. How did that come about, and how do you get into the Scorsese mindset?

I am, yeah. Again, another iconic person. Hopefully I did it justice. I haven’t seen the film yet. But, yeah, I got a phone call about it and thought this sounds fun. The scene was really fun, because everyone was playing a bunch of famous filmmakers – Brian De Palma, George Lucas, Spielberg and Robert De Niro was in this one scene. Twenty years ago, when you were making this little teen comedy, could you have ever imagined that American Pie would become such an iconic film and spawn a whole series of films?

Definitely not. I was just happy to have a job. I never would have thought we would have made a sequel, let alone that it would become a franchise, or what people refer to now as a cult classic. Now it’s a billion-dollar franchise.

What was it like to be part of that series? Particularly the first one, but even the last one I thought was really good.

Oh, thank you. It was a lot of fun. I am always happy when I’m on set. That’s where I thrive, and the thing that has kept me in this business for… gosh, 31 years or something like that?

You started off acting as just a kid with Rookie of the Year. What was it like to be carrying a film when you were still that young?

It was amazing. I was so stoked to be there. To film on Wrigley Field was awesome. It was an amazing experience. I still have very fond memories. Starting in 2008, I started throwing out the first pitch at a game for the Cubs every year. This year is actually the 25th anniversary of Rookie of the Year.

Do you have a favorite team?

Well, I don’t really follow baseball, but I do follow the Cubs. When they got into the World Series, I flew out for game four, and of course watched them lose the game. But as the Cubs usually do, they pulled it out of nowhere and took the series back.

You worked with Tara Reid [who played his girlfriend in the American Pie series] again last year on Trailer Park Shark. That was definitely a different kind of film…

(laughs) Yeah. That was kind of like Sharknado meets Raising Arizona. That was a lot of fun. A friend of mine, Griff Furst, was directing that. I had hired Griff 20 years ago on his first acting job for a film that was my writing/directing debut [LA DJ]. It was just full circle, 20 years later Griff was, “Hey, do you want to come do this silly shark movie?” I was like, you know what, if you’d asked me ten years ago, I would have said no. I’m really serious about my craft. Now that I’m older and I’ve got a kid, yeah, I’m just going to do this stupid, funny, ridiculous, silly shark movie.

You also have a band, too. Is it tough balancing your time between acting and music?

I’ve played about 600 shows in the last ten years. Released six albums. I’ve only ever had to postpone about five shows. I’ve gotten really lucky. I usually plan them out in between jobs. When I’m shooting a movie, it’s maybe a month, or three months. There’s plenty of time in between to tour.

This is your second straight year at the Philly Wizard World. What is the whole experience like?

Oh, it’s amazing. What a job. You get to sit at a table and people come up and go, “Hey, I love your work.” I get to meet all the people that enjoy my work. And it’s my opportunity to say thank you for watching. People keep on watching, I get to keep on doing what I do.

You are here with author Lani Sarem, whose new book Handbook for Mortals you are turning into a film.

When we were here last year, the book wasn’t released. (Grabs a copy of the book from his table.) The cover wasn’t done. We were just pre-selling the book that was going to come out in August. That was June last year. The book is Handbook for Mortals. We actually met Ryan M. Kinkaid who drew the cover here at Philly Wizard World. It came out, because of the pre-sales at Wizard World in Philly, and I did other Comic-Cons and other Wizard Worlds in other cities. By the time we got to Chicago, all the pre-sales for the book [made it] debut at #34 in the USA Today best-seller list. It was amazing. I’m going to be producing this book into a feature film later this year, so it’s kind of our Wizard World anniversary here.

Are you going to be acting in it as well? Or directing?

I’m going to act in it. I’m going to play a supporting role. It’s a woman-made project. The main protagonist is a young woman. We’re going to hire a female director, since only four or five percent of all films seem to be directed by women, and ironically, woman-directed films make 20% more. So, we’re going to hire a female director. Lani Sarem, who wrote the book, is also writing the film. I’m the odd man out in this equation. But, my wife (Colette Marino) has been a touring DJ for 25 years, and that’s obviously a very male-dominated field. I’m all in support of equal opportunities and pay. It’s not about who does the work, it’s about the work they do. 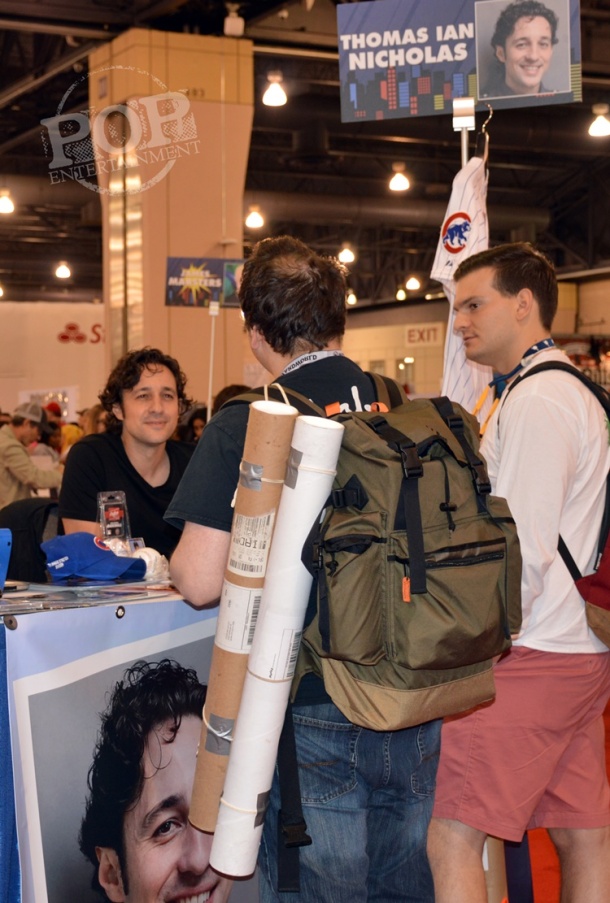 As a celeb at Wizard World, do you ever get starstruck?

Oh, for sure. Henry Winkler is here. I met him a few Wizard Worlds ago, in St. Louis, I believe it was. He writes these great children’s books. I got book five signed for my son, who is six years old. It’s all about zombies (the book is titled Here’s Hank #5: There’s a Zombie in My Bathtub), so I know he’s going to love that. And Sebastian Stan, the Winter Soldier in the Marvel movies. Three of the Justice League guys, Jason Momoa, Ezra Miller and Ray Fisher. There’s a lot of great guests here, obviously. I have become friends with Holly Marie Combs, who has done a lot of Wizard Worlds. Brian Krause. They’re both from Charmed. The list goes on and on. I definitely still get starstruck. Wizard World is the kind of place where we’re here as actors, to see people away from work. So, I feel a little less intimidated to say hello. I hope that fans feel the same way.

Have you gotten a chance to visit our city a bit while you’re here? What do you think?

I haven’t. I mean, I’ve walked around a little bit, in the rain.

Yeah, I guess it’s a bad weekend for it…

But there’s great restaurants in Center City. I’ve been to Philadelphia a bunch of other times with my band over the years. We used to play at the Khyber, which I hear is no longer around.

Yeah. We’ve played some other venues as well. I have some friends that live… I guess they don’t technically live in Philly, but they live in Cherry Hill, New Jersey (across the river). Close enough. We love that tri-state area, also including the Big Apple. So, everything is cool. It’s a great area.