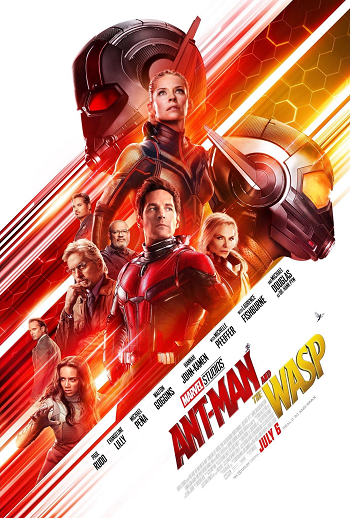 Ant-Man and the Wasp

As we all know, my daughter, Leni Paul, is the Marvel (excuse me, Marvel Cinematic Universe) fan in the family, I am just happily along for the ride. But Leni’s ill-timed summer travel left me headed to the preview of Ant-Man and the Wasp on my own.

After asking all of the MCU super fans that I knew, all busy with work day commitments, I convinced a friend to join me. We were probably the least likely attendees in the audience but did our homework and watched the first Ant-Man in preparation.

Of the Marvel Cinematic Universe films, the Ant-Man story is one of the more family-friendly stories. Our hero, Scott Lang (played by Paul Rudd), is an ex-felon, newly released from jail after serving his sentence for burglary. He is not portrayed as a “common criminal” but rather more of a modern-day Robin Hood.

At his release, he has focused his attention into being a good father, the hero that his little girl Cassie (Abby Ryder Fortson) already believes him to be. Resettling into a responsible life after incarceration is more challenging that Scott hopes, and he finds himself recruited into one last “job” with prison mate turned roommate, Luis (Michael Pena). This led him to meeting Hank and Hope Pym (Michael Douglas and Evangeline Lilly) and Scott’s adventures as Ant-Man.

Well, a lot has happened since the original Ant-Man. There’s been a Civil War (of Captain America fame) and Scott is reaching the end of his two-year house arrest, his penalty from aiding Cap in Germany. He is no longer on speaking terms with the Pyms after stealing the Ant-Man suit for the work in Germany and he is now the house-bound partner in a security firm with Luis.

In spite of the years of “captivity,” we find Scott living his life happily as the devoted father that he had aspired to be. He has a decent relationship with his ex and her new husband. He seems ready to move on to the next stage of life, without the ankle cuff and FBI raids whenever his cuff breaches the confines of his four walls.

Two days before his uncuffing, his life reconnects with the Pyms. Scott is torn between helping them with their noble mission in search of Hope’s mother, the original Wasp (played by Michelle Pfeiffer) and breaching his house arrest, risking 20 years in prison and the potential loss of his relationship with his daughter.

Ant-Man and the Wasp was a super-satisfying summer film – one of the most family friendly storylines in the MCU. There are some extremely imaginative moments between Scott and Cassie, as well as STEM (Science, Technology, Engineering and Mathematics) strong female characters – between Hope and her mom. The shrinking effects have come a long way since 1989’s Honey I Shrunk the Kids, with characters phasing back and forth between sizes for car chases and fights for their best advantage.

As always in the MCU, be sure to stay through the credits for two end scenes. I’m pretty sure you won’t hate me for that reminder later…. Well, Leni might….