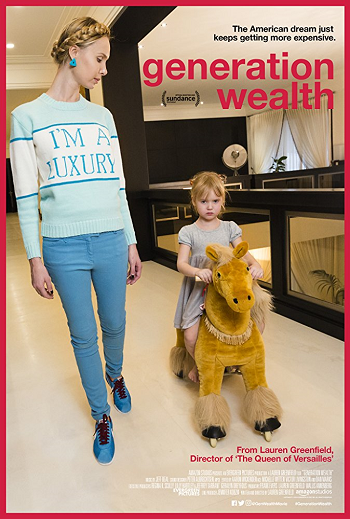 Forget Andy Warhol’s old quote that everyone will be famous in the world for 15 minutes. We are in a period where anyone can become famous for any vacuous, salacious reason – and for years on end, not just for a short period. It has nothing to do with their ideas, their bravery, their skills, their moral compass, or their impact on the world. It has to do with shallowness, outrageousness, shamelessness and the size of their wallet. Life has become an MTV series. Conspicuous consumption is the new black.

As a photographer, and now as a documentarian, conspicuous consumption has always been Lauren Greenfield’s beat.

Like the coffee table book that this film is named after, Generation Wealth is not Greenfield’s look at a single subject, as she has done in previous projects like The Queen of Versailles and Thin. Instead, this movie is sort of an overview of a whole modern lifestyle and a gallery showing highlights of her entire body of work, with a vague theme trying to tie everything together.

Of course, with a subject as broad as the lust for wealth and fame, sometimes it is tough to follow a track. Generation Wealth is all over the place; sometimes in a good way, sometimes not so much. It touches on bling, cosmetic surgery, pornography, teen angst, white-collar crime, hip hop, star fucking, wannabes, workaholics, child stars, technology, family, art, commerce… and many, many other things.

Generation Wealth has some stunning and touching sections, but Greenfield may have stretched her thesis a little too thin. It’s an enjoyable and fascinating (in a voyeuristic way) look at the world in the Trump era, but it doesn’t quite hold together and make a cogent point like The Queen of Versailles did.

Generation Wealth is more of a best-of compilation – of her photography and her interviews. Luckily, many of Lauren Greenfield’s bests are very good.

Like, for example, the story of Kacey Jordan, a small-town girl who arrived in Los Angeles with big dreams. In the end, her dreams of stardom came true – sort of – when she became a popular porn actress. She gained a bit of notoriety as one of Charlie Sheen’s angels, when the dude was in full-blown tiger blood meltdown mode. Greenfield pops in and out of Jordan’s life over the years – from her naïve early days, to the point when she is a hardened pro in the adult film world, to her humbling return to her hometown, working at a local restaurant for minimum wage. Especially heartbreaking is the point when Jordan tries to livestream her own attempted suicide – by taking too many pills – on YouTube, in a desperate try for one last gasp of infamy.

Also disturbing is Eden Wood, a six-year-old model and short-lived pop-culture phenomenon for her appearances in the reality series Toddlers & Tiaras, in which this prepubescent girl was basically tarted out like a showgirl by her own fame-hungry mother. A disturbing early interview shows Eden to be a willing participant, worshipping money over all else. Later in the film we return to her, a 13-year-old has-been, scrubbed clean of the glitter and glamour and returned to her trailer park roots.

Other fascinating interviews include a school-bus driver who went homeless because she borrowed so much money on plastic surgery, and a woman exec who worked so hard to make it in a man’s world that eventually she realized she spent so much time and effort on becoming rich that she never bothered to have a personal life. This particular regret was echoed by former hedge-fund manager Florian Homm, who worked hard, built up enormous wealth and luxury, and then lost it all and is now under house arrest for his crimes. He brags good-naturedly about his decadent high life, but eventually passionately (perhaps a bit too passionately, honestly) rails about his own shallowness and lost opportunities in life.

Greenfield even checks back in with her Queen of Versailles subject Jackie Siegel to see how life has changed since the first film, which documented her own financial Waterloo when she and her rich husband tried to have the largest home in the United States – by rebuilding an 85,000 square foot French castle in Florida. Needless to say, it turned into a money pit.

Finally, Greenfield also follows herself and her own family – asking questions of her own motivations as an artist and as a businesswoman. She films her mother, her husband and her children (to the point that the kids just want her to stop shoving the camera in their faces and leave them alone). Is Lauren, too, susceptible to base emotions like want and greed? (After all, her coffee-table book came in at a rather pricey $75.00 apiece.) Or does her homelife and family help her to cope? Does it have anything to do with her independent mother, who uncomfortably answers some tough questions about not being there for Laura’s upbringing and her own motivations.

Unfortunately, eventually the broad scope of the film leaves Greenfield a little lost looking for a way to wrap things up, and the last section of the film takes the disappointing and slightly trite path that “Money doesn’t bring happiness… but being a parent does.” Not only is this sudden sidetrack not really set up earlier in the film, but it’s just a tiny bit patronizing. Is she suggesting that childless people can’t be happy? For that matter, is she suggesting that rich people can’t be good parents?

However, like most compilation pieces, the question is: “Do more of the parts work than don’t?” The answer to that is a firm yes. It may be a little uneven and a little disjointed, but for the most part Generation Wealth is thought-provoking and intriguing. Plus, the photography throughout is stunning. For that alone, Generation Wealth is worth the trip.