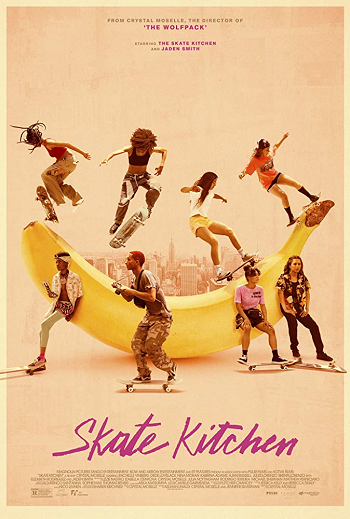 Camille (played by Rachelle Vinberg) is 17 going on 18 when Skate Kitchen opens. She lives a quiet life with her mom in suburban Long Island and has a passion for skateboarding and Instagram.

In the opening minutes of the film, she suffers a fall while on her skateboard, leading to emergency care and her mother’s forbidding of further boarding. As you would guess, Camille cares more about skateboarding then safety and ventures out in search of some fellow skateboarding Instagrammers (is that a word?) in Manhattan.

While finding comradery with these skaters, Camille’s communication with her mother breaks down, eventually leading her to move out after she has turned 18. She gets a job and moves in with a fellow skate boarder, Janay (played by Dede Lovelace), a teen who lives at home with her very understanding father who accepts a group of teens hanging out smoking weed in his daughter’s bedroom without comment and doesn’t blink an eye at the new roommate situation. Janay is used to getting what she wants when she wants it.

The story is pretty simple. Camille moves out on her own in search of the freedom to follow her passion, moves in with her new friend. Then, just at the point where Camille is settling into a feeling of ease, she falls for the winsome, artistic Devon (played by Jaden Smith), who has a past with Janay, causing a love triangle that leads to a rift with Janay and thus the posse of skater girls.

Add to it some cool skateboard tricks, a lot of Instagram posts, sex and drugs, and you have Skate Kitchen.

I really liked the awkward Camille character and feel she was really written well. She is complex and interesting, with internal and external battle scars from both her family life and skate boarding. The writers did a really good job developing her character and she is really talented to watch on her board, keeping up with the boy boarders, who, as the film points out, think less and do better because of it.

The other young women of Skate Kitchen were also engaging to watch as they talked about boys (and girls), working through questions about life, sexuality, their bodies and more. For sure, it was an informative time for Camille, as she did not have anyone else before who was open to asking questions kind of relationship.

Khalid’s “Young, Dumb, and Broke” seemed very appropriate as part of the film’s soundtrack, summing up the life of a skate boarder. Other tracks were less memorable, more background sound.

I think that what Skate Kitchen does well is to illustrate the loneliness that teens are feeling today – feeling connected more with Instagram and other social media than real people. When Camille ventures away from Instagram and into the lives of the girls she has watched there, she starts to form real connections, have real conversations. It helps her to question and form an identity with skating and herself. I think it is cool that they show this emotional disconnect in the film and it would be interesting for teens to be confronted with this in a film.

Having said that, I am not quite sure who the target audience is for this film. The mom in me naively hopes that teens would not feel comfortable with the explicit sex and drugs shown in this film. Camille certainly wasn’t… well, not at the start.

My guess is that I am being naïve, but still don’t think I would feel comfortable with my 16-year-old watching this film. Perhaps the audience is more late teens, early 20’s – where people are out of the forced social environment of school and facing real social isolation?  This is me, speculating through my discomfort. Overall, the Skate Kitchen held my attention as I hoped that Camille would safely maneuver through this challenging, yet free, period in her life.