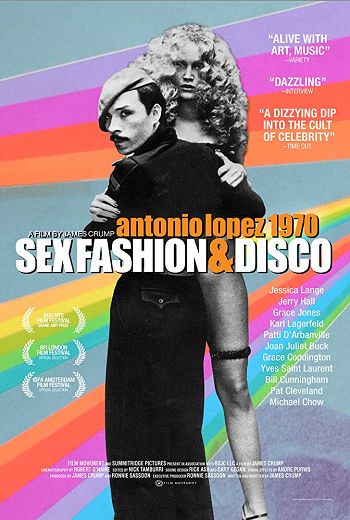 1970s New York City was a very different time than the present day. From the tales that are told, it sounds more like a mythical, magical time of artistic and sexual freedom punctuated by a disco soundtrack. Antonio Lopez 1970: Sex, Fashion & Disco arrives at a good time; if ever we needed to let in some love and beauty, it is now.

Antonio Lopez was a celebrated fashion illustrator, known for his detailed, sensuous, at times surreal, line drawings of beautiful women with long bodies and flowing hair. His work was filled in with bold colors – orange, green, gold… the colors found on the wallpaper in my 80s childhood home. His illustrations were found in all the important fashion magazines of the time, notably Elle, Vogue, and The New York Times.

After meeting his fashion partner Juan Ramos, at Parson’s Design School, the pair moved into an apartment/studio at Carnegie Hall. This apartment became the hub for their scene, with beautiful, young people coming in and out at all hours – spending all day getting ready to go out all night dancing at Max’s Kansas City. Then Lopez would start on an all-night fashion drawing session.

Like any good documentary, Antonio Lopez 1970: Sex, Fashion & Disco is chock full personal interviews with the subject’s many admirers: men, women, colleagues, adversaries. These interviews feel like a love letter turned epitaph to a personality that lived his life with passion and was taken from the world far too soon at 44 years old, in 1987, from AIDS.

Lopez was held in high regard by the people interviewed. The most-used words are things like charisma, handsome, talented, passionate, and fascinating. They describe drawing sessions filled with intensity. Once you became a target of Lopez’s attention, you were helpless. When you were near him you just felt like movement and dancing.

The film’s title: Sex, Fashion & Disco feels like a play on the better-known title: Sex, Drugs, and Rock & Roll. The difference between life pre- and post-HIV/AIDS is never felt more than in the sexual freedom that is described in Lopez’s story.

Men and women alike spoke about being in love with Lopez, including interviews with actresses Jessica Lange, Patti D’Arbanville and unlikely beauties Donna Jordan and Jane Forth.  Absent from the interviews, but nonetheless important to the story, is Jerry Hall, who at one point was “engaged” and mock-married to Antonio. The women knew that while bi-sexual, he leaned more towards men. Although his early romantic relationship with Juan Ramos lasted only five years, their working relationship lasted through Lopez’s lifetime.

Antonio Lopez 1970: Sex, Fashion, & Disco is a captivating romp through a romanticized view of the 1970s, with a surprisingly good disco soundtrack throughout. I’ve never enjoyed disco so much. In a year with a number of fashion-focused documentaries, this is one of the most entertaining.