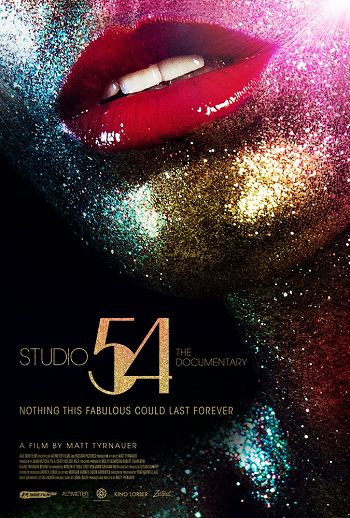 You would think that a movie about arguably the most decadent place in the last century would be more interesting than this. Which is not to say Studio 54 – a look at the legendary disco that became a mecca for drugs, dance and celebrity, before flaming out spectacularly – is a bad film. It’s rather good. However, you can’t help but imagine with this source material, it could be so much better.

The biggest disappointment about Studio 54 as a movie is that for a documentary about arguably the most infamous dance club of the 20th Century, there is surprisingly little of the music that was the place’s life blood. I mean, I get that music licensing can be expensive, but there is nothing from any of the biggest names in disco – like Donna Summer, Chic or the Bee Gees. Instead they do have a few big hits from lesser-known artists – Andrea True Connection’s “More, More, More,” Silver Convention’s “Fly Robin Fly,” Sylvester’s “You Make Me Feel (Mighty Real)” and Candi Staton’s “Young Hearts Run Free” all make an appearance, and all are great songs. The rest of the soundtrack is mostly made up of obscurities, some of which aren’t even disco.

This lack of interest in the music that fueled the place extends to the film’s talking head interviews, with only Nile Rodgers of Chic brought on board to discuss the way that the club helped to expose the music, and vice versa. Above all else, Studio 54 was a dance club, you’d think they would have talked to more of the musicians whose careers were affected by it.

Instead of the music, Studio 54 tends to fixate on the story behind the scenes. Which makes some sense, I suppose, the film has access to former Studio 54 partner-turned-hotelier Ian Schrager, who has been reluctant to tell the story of the famous discotheque over the years since he got out of jail for drug and tax evasion charges stemming from the place.

Schrager’s former partner Steve Rubell, who was more the front man for the club, sadly was a casualty of AIDS in the 1980s, though Studio 54 also has a wealth of archival footage of the man talking about the experience of being ringmaster at the world’s wildest circus.

The film suggests, and I mostly agree, that Schrager and Rubell were not so much trying to game the system as they were two guys who weren’t sure what they were doing that got thrust out over their heads when the popularity of the club exploded.

The film takes certain liberties. For example, they place the blame for the stupid “Disco sucks!” movement pretty much completely on the club and its velvet rope approach of excluding the “normal” people. While Studio 54 was certainly a contributing factor for the “death” of disco, it was just one of many societal reasons for the backlash.

However, even with its flaws as a movie, the baseline story of Studio 54 is just so inherently fascinating – and there are so much interesting footage and pictures of the decadence on display – that the movie can’t help but be worth watching. And, if nothing else, this is heads and shoulders better than the awful live-action 54 film made a couple of decades ago with Ryan Phillippe, Salma Hayek and Mike Myers.

Seeing Studio 54 will never be a replacement for those of us who never got to see the real thing, but at least it gives us a taste of what the place was like.