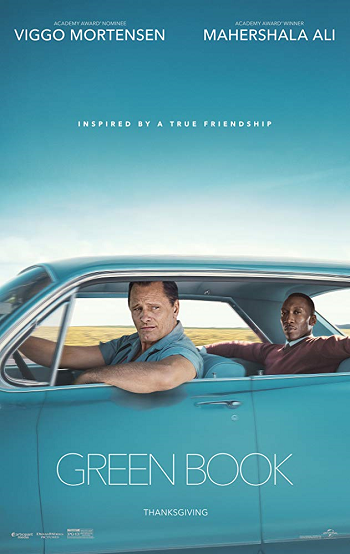 There was a certain amount of wariness in the back of my mind going into Green Book. After all, it is the solo debut of Peter Farrelly, who with his brother specialized in rude gross-out humor in films like Dumb or Dumber, There’s Something About Mary, The Three Stooges and Kingpin. Could he actually have the soft touch to do a nostalgic comedy/drama about racism in the Jim Crow south?

Turns out, yes. Yes, he can. Green Book is a terrific crowd-pleaser, perhaps a tiny bit sanitized, but, smart, funny, sometimes sad and most of all extremely sweet.

In fact, that sweetness has always been in the background in Farrelly Brothers films, it usually just got overwhelmed by everything else around it – the dumb, gross-out humor, the broad sight gags, the over-the-top anti-socialness, and the wacky characters.

Luckily, Farrelly mostly jettisons the gross-out humor that he specialized in with his brother, and on the rare occasions that this does peek out it is usually a short food-based sight gag.

Instead, he focuses on characterization, sweet nostalgia and the bigger picture of racial relations in the early 1960s. Green Book is an odd couple tale of friendship – which has always also been a staple of Farrelly’s work – but the characters are given a lot more depth and nuance than he normally allows.

Even when a character is allowed a little bit of stereotypical shading – particularly with tough guy Tony “Tony Lip” Vallelonga (Mortensen) and his family – there is more to them than first meets the eye.

This based-on-a-true-story tale of a brilliant black jazz/classical pianist Don Shirley and the birth of his oddball friendship with Italian low-level wise guy Tony Lip is obviously calculated to be a feel-good movie, but it is also sometimes surprisingly dark, layered and thoughtful.

Shirley and Tony Lip met when Shirley was doing a tour through the southern states. Shirley hired Tony to be his driver and helper, but there is an unspoken subtext that he needed some muscle on his side in case of trouble in their travels.

They are complete opposites – Tony is a garrulous and slightly obtuse con man, while Shirley is quiet, reflexive and very well-mannered. However, as they spend time on the road getting on each other’s nerves they slowly come to an understanding of their counterpart’s world, they eventually enter a grudging friendship.

Tony, who is reflexively somewhat bigoted – comes to look at the man, not the color of his skin – and also appreciate the brilliance of his playing and the hardships the man has to deal with on a daily basis just because of who he is.

Dr. Shirley, on the other hand, has hardened himself to be well-spoken and completely reject anything that would be considered stereotypically “black,” leaving him a lonely man who cannot relate well to either whites or blacks. Tony helps him loosen up a bit, still be a strong role model but also allow himself to enjoy life a bit.

Mortensen and Ali do stellar work – as does Linda Cardellini as Tony’s wife Delores – and make this off-the-beaten-path friendship feel natural and unforced. The film also shines a light on recent history, a history which is sadly becoming more and more relevant again, as brave men like Dr. Shirley put their lives and safety at risk to help others coming behind them.

Green Book’s title references a guidebook back then for safe places for black people on the road to stay and eat while traveling down south. Farrelly reminds us of this kind of unfairness without getting preachy, and the film is always funny, which also takes the edge off in some of the more dramatic situations.

It appears that Peter Farrelly had what it took to make a smart and insightful film about race and personal relations after all. Good for him for having the bravery to take a chance like this, and for succeeding so wonderfully.

One thought on “Green Book (A PopEntertainment.com Movie Review)”