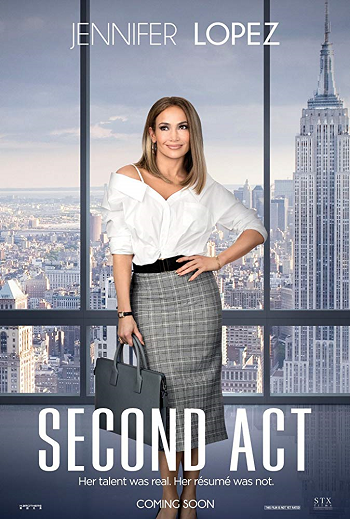 There are certain movies that are completely useless to try to criticize. No one expects Second Act to be good. And it’s not. It fills a market niche, an increasingly small one. It will slip in and out of theaters before you blink. There is no way it’ll be a fluke blockbuster. It’s unlikely to become a cult favorite. It’s not likely to be get a huge following on video or streaming.

However, for people who are looking for what Second Act has to offer – mostly the ever-shrinking fan base for J.Lo movies, or undemanding fans of everything rom-com – the movie is mostly harmless.

Do you know how in drug commercials, they always show people performing self-consciously “natural” daily tasks while the voiceover lists all the many, many potential side effects that the drug may cause? In a weird way, Second Act reminded me of many of those little ad interludes.

Everyone is trying desperately to seem like normal folks, doing normal things. And yet, I really didn’t believe that anyone in the film, whether the multitudes of “with-it” poor people or the “out-of-touch” rich people were real live humans doing or saying real life things. They were just actors awkwardly trying to look like common people.

Of course, it’s not all the actors’ fault. They are just given such hackneyed things to do and say that it is nearly impossible for them to just settle into their role. Pretty much everyone in Second Act is not so much a character as a stereotype, and the plot line is pretty much driven by plot holes, inaccuracy and coincidences.

Yet, I guess to a certain extent, it doesn’t really matter. Like I said, Second Act is not pretending to be anything it is not. When I saw it – at a semi-crowded date-night theater run rather than at a critics’ screening – the audience seemed to mostly enjoy the movie. They laughed in many of the spots they were supposed to, they overlooked many of the film’s plot holes, and they even clapped politely when the closing credits rolled (not overwhelmingly, but enough that it was obvious that some people enjoyed it.)

Second Act is a fairly unaccomplished feel-good girl power movie, but it will have its small appreciative audience, and that’s all that they ever wanted. It won’t change the world, but it will be a slight part of the world, and maybe that’s okay.

The story of Second Act – as much as it has a story – has Jennifer Lopez playing Maya, a smart and business savvy assistant manager at a Queens grocery store who can’t seem to move up the corporate ladder because she doesn’t have a college degree. When she quits because the open manager job at her store is given to a complete incompetent over her, she takes an interview with a major corporation.

What she doesn’t know is that her nephew has created a fake résumé for her, claiming she has a Master’s Degree, is fluent in several languages, and spent time in the Peace Corps. When she is offered a huge job (nice vetting, F&C Corporation) Maya takes it, despite the fact that she is totally unqualified for it. Then she has to keep all sorts of balls in the air – getting to know her new bosses (Treat Williams and Vanessa Hudgens), trying to prove herself in the workplace, and still stay down to Earth with her boyfriend and her old friends.

The dialogue is trying desperately to be edgy and street smart without ever really accomplishing it. I was going to scream if I had to hear Maya tell her boyfriend (Milo Ventimiglia) that he has a nice ass one more time. (Milo Ventimiglia’s ass? Really?) Also, the running gag in which Leah Remini’s working-class best friend can’t stop cursing in front of her children is not as funny or clever as the movie thinks.

Maya may now be in the boardroom and dressing in designer chic outfits, but you can tell she’s still Jenny on the block because she does an awkward line dance to Salt-N-Pepa’s “Push It” with her blue-collar gal pals. At least, I think that’s why we’re supposed to bond with her.

None of the story really makes sense, but I don’t think it is supposed to. There is a huge, huge plot twist that is never really explained. We’re supposed to believe it really happened simply because that’s what the script says. The film telegraphs the twist several times leading up to the reveal, but it still seems to be insanely unlikely… to be charitable.

And I didn’t even bring up the totally out-of-left-field way that the atomic bombing of Hiroshima becomes fodder for yet another very unlikely plot point.

Let me be clear. Second Act is not a good film. Far from it. It’s actually really pretty bad. But, does that really matter to the people who might like it? Maybe, maybe not. If you’re looking for a romantic comedy, you could do much better. Even if you’re looking for a good Jennifer Lopez romantic comedy (which is not exactly a huge pool), you could do better. But if you’re watching HBO some night and this movie pops on, I suppose there are worse ways to waste a couple of hours.