Thinks She’s in Love with Music

She is from Toronto, Canada and at the youthful age of 12, she is a powerhouse and a force to be reckoned with! She is a classically trained vocalist, piano player, and currently is enrolled in dance classes and guitar lessons.

She has previously performed across Canada for sold out crowds as a member of the Mini Pop Kids (Canada’s best-selling kids music group). In addition, Cohen is also an accomplished actress. She has been on shows such as: American Gothic (2016), Milk Kids (2019) and Hue’s Theatre (2017).

After being in a group, Cohen is beginning to branch out and move on to bigger and better things as a solo artist. Her most recent single “I Think I’m In Love” was released on December 6, 2018. The track tells the story of a young girl’s first crush and how it feels to fall in love for the first time. This track follows her previous single, “Who We Are.”

Recently Cohen has been taking some time out to write and collaborate on new music. She has been fine tuning her writing skills and is now ready to record her new song in Los Angeles, which is where we caught up with her at Gramophone Studios.

Hi Aviv! Thank you for your time today.

Thank you! Thank you so much for having me.

So just to clarify, how old are you?

Wow! You have such a BIG voice for such a young person!

Aww, thank you! Thank you so much.

Can you tell us about your recent single?

I feel like 12 has been a big transition year for me and my friends. Ultimately, that’s why I wrote this song.

For our readers who have never heard your music, can you explain your sound in four words?

I would say inspiring, young, creative, and relatable. I like to make music that kids my age can listen and relate to. I want them to be able to say, “I’m going through this today, so I’m going to listen to that song.” 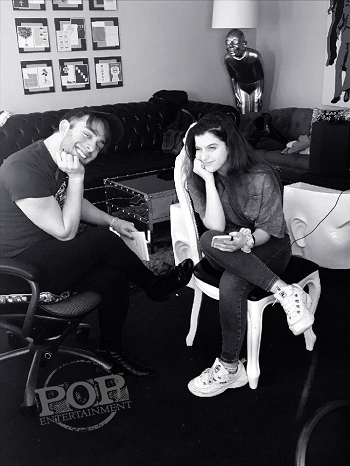 You’re a songwriter as well, right? Do you write all of your own music?

Yes. That’s why I’m in LA. I’ve been sitting down with some writers recently, as well as writing some of my own stuff. It’s funny, normally when I’m writing my music, I’ll get an idea for a song and I’m like “Mom stop EVERYTHING, I need ten minutes, to write this tune!” I can also be at school and I’ll whip out my phone and start recording ideas for songs.

What was the inspiration behind your new single “I Think I’m In Love?”

Mainly, just what’s been going on in my life. I have a lot of friends who struggle with this kind of situation being confusing, and I just really want to be able to be a voice to help guide kids along, so that they know it’s okay and it’s normal.

Have you always wanted to be a singer?

I actually started off in acting, firm fact. I was an actress way before I was a singer. But I went to this camp, and there was a camp play, so I started singing and discovered I have a huge passion for singing just as much as acting. While I was there the passion grew bigger and bigger and bigger! With the support of my siblings and family, I’ve been lucky enough to be able to make something out of it.

Who is your biggest role model when it comes to singing?

Probably, Jorja Smith. She’s one of my favorites! She’s very jazzy and poppy all at the same time. She’s just so, so talented and such an inspiration to me.

Outside of singing and acting, do you have any other interests?

I love to go on biking adventures in Toronto. Sometimes, when it’s snowy, I’ll go to my best friend’s backyard ice skating rink, as well! I love to ice skate.

If I were to turn on your iPod right now, what artist/songs would be on your recently played list?

Oh, probably anything Halsey or Billie Eilish, something like that. Billie is also very young, so I relate to her a lot.

Ten years from now, where do you hope to be at in your music career?

Probably, just continuing to write my music and developing my voice, all of that stuff.

If you could open for any artist that is on tour right now, who would it be?

Most definitely Jorja Smith! I love her.

Do you have a motto or a quote you live by?

I always say “Be you and express the quirkiness inside” because I find myself pretty quirky. That’s usually how people describe me, and I love it.

At the end of the day, what do you hope your fans take away from your music?

Do you have any other events or performances coming up?

No. Right now I am working hard on new material. I have been able to work with and collaborate with some amazing people. I’m really excited about that.

Where can our readers go to connect with you at?

After our interview, we were lucky enough to sit-in on Aviv’s session. She was a sprightly young lady who is very mature and well-spoken for her age. Even though most of her singing experience so far has come from being in a group, you can tell she is ready to make that jump to a solo career. We are so excited to see what she does next! Don’t forget to go watch Aviv’s new music video for her single “I Think I’m In Love.” And make sure check her out on Instagram and Twitter.