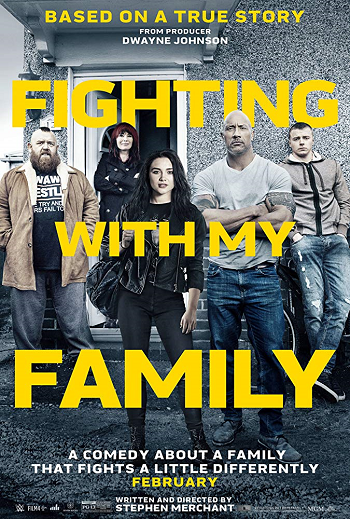 Fighting with My Family

Is it possible that my father was right all of these years? That the drama of fixed professional wrestling was what I needed in my life? Today, he receives a moment of redemption and gratitude as I watched wrestling-focused Fighting with My Family and found it was exactly the film that I needed to watch.

Based on the true story of Saraya Knight (played by Florence Pugh), who was signed to the WWE under the wrestling persona name Paige, Fighting with My Family tells a story of family, chasing dreams, and persistence against all odds.

Born in to a family of crazy wrestlers, dad, Ricky Knight (played by Nick Frost) and mom Sweet Saraya (played by Lena Headey) made wrestling a family affair. At 13, they had Saraya step into the ring with her brother Zak (played by Jack Lowden) and she quickly learned to love the limelight.

They wrestled as a family in local Norwich, UK, setting up both matches and a training program as the World Wrestling Association (WWA), engaging their community – particularly Norwich’s youth – to keep them busy, focused and away from drugs and crime.

It’s a noble pursuit, but both Zak and Saraya see it as a stepping stone in pursuit of their real dream – to wrestle with the WWE. Their opportunity to audition comes early in the film, but when only Saraya is chosen to move forward on the WWE path, she must leave her brother behind in Norwich to pursue her dream. But was it really her dream or her family’s?

There are some super important, or at least, appreciated messages in Fighting with My Family.

Fighting with My Family was funny and smart, but most importantly, true to itself. Dwayne Johnson’s footprint is all over this film – he received a producer credit and cameoed as himself twice (and in an end credit blurb).

This is a film that I will want to watch again for all the right reasons. I have already recommended to my daughter. I may even plan a trip to watch it with my dad.