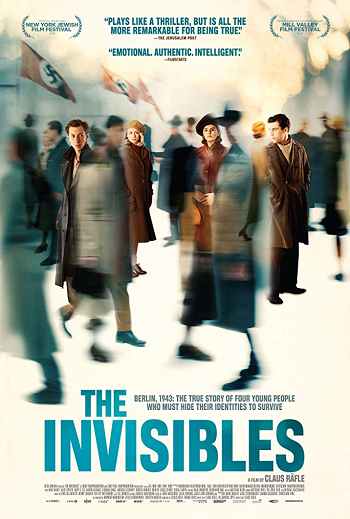 The Invisibles takes a fresh look at a Nazi Germany through the stories of four Jewish survivors of the period. They escaped deportation from Berlin, and along with 7,000 fellow Jews, managed to survive in Berlin by hiding in plain sight. This 110-minute film directed by Claus Räfle tells the stories of Hanni, Cioma, Eugen and Ruth. Part documentary and part reenactment, The Invisibles moves between the two, illustrating the stories with actors while keeping the true survivors at the forefront.

Cioma Schonhaus went into hiding in 1942 at 20 years old. He is now an old man, with bushy greying brown eyebrows and moustache. His story begins when he manages an exemption from deportment to remain working at a gun making factory. He is separated from his parents with barely a goodbye, without any understanding or knowledge if he would ever see them again.

Ruth Gumpel, née Arndt also went into hiding at 20 years old in 1942. She and her brother convince her parents to ask neighbors for help. Her father, a local, well-respected physician, was offered assistance from patient families. The family was separated for the first time between different households. They have no knowledge about how long they would be relying on the kindness of their neighbors, particularly knowing that the neighbors were putting their own lives at risk by hiding them.

Eugen Friede was hidden by his non-Jewish stepfather at only 16 years old. He recalls the day where a Gestapo agent ripped off his star, saying it was sewn on poorly, and his mother, in tears, realized it was imperative to get Eugen to safety.

Hanni Levy was living with a family after her mother died. She went into hiding at 17 years old when the family was deported, leaving her in the apartment alone. She was not on the round up list, but she knew she had to leave before the Gestapo returned.

The Invisibles tells the story of the Holocaust from a very different perspective of survival from outside the camps. Stories are filled with details that I have rarely considered. How strangers would see their Juden stars and secretly offer them a pack of cigarettes, a silent solidarity that helped to give the hidden a glimmer of hope. How hard it is to find food or warmth when you have no money and are trying hard to slip between the cracks. That hunger also became a program for the families that housed the hidden. And, of course, the realization that no one knew what was happening to the Jews.

The unrelated storylines interweave in a few places, first with a Jewish informant named Stella, who first is introduced in Ruth’s story and returns in Cioma’s as a dinner date where we tensely wait for the other shoe to drop. A second is with a man named Werner Scharff, who is first introduced in Cioma’s but is taken to a camp, and returns in Eugen’s story, where he helps to open the eyes of the nation.

The musical score kept the dramatized reenactments moving and really added to the intensity of the story. My one complaint was that at times, the white subtitles for this German language film would get lost in the picture and be difficult to read.

Overall, The Invisibles was an easy to watch, captivating film that I feel certain I will see again with my parents. It has a fresh perspective with a focus on hope in a horrifying time.