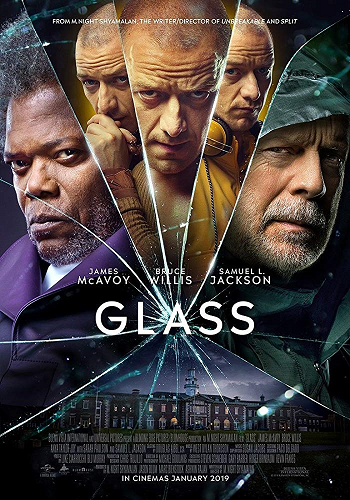 I may be incorrect on this fact, but I’m relatively certain that Glass is the first time that one movie acted as the sequel to two separate, totally distinct films. M. Night Shyamalan’s latest is a mash-up of characters from two of his earlier works: the 2000 vigilante drama Unbreakable and the 2016 serial-killer/hostage thriller Split.

This seems a little odd, since though they share some thematic similarities, in general the two movies have little in common. The script suggests here that their connection is comic book superheroes, but while Split did have a supernatural villain called “The Beast,” that movie otherwise didn’t appear to have too much of the feel of a graphic novel.

Shyamalan did hint at this merging of plotlines in the closing scene of Split, when Bruce Willis’ hero vigilante David Dunn suddenly out of the blue had a cameo appearance in a diner watching a TV news story about the goings on in Split. His appearance in the earlier film was a slightly confounding Easter egg for Shyamalan’s fans (are there still any of those out there?), but not a part of the story of that film.

There is an even more basic problem with the slicing and dicing of these two stories. Split, which is only a few years old, will probably still be relatively fresh in people’s minds. However, most people – myself included – haven’t seen Unbreakable in almost 20 years and only have a vague recollection of the happenings in that film.

Nonetheless, Glass reunites (and unites) four major characters (and a few other minor characters) from those two films.

From Unbreakable there is Dunn – aka the Overseer. Dunn is an ordinary man who finds he has superpowers – super strength, invulnerability to injury and the ability to read the minds of people he has touched. He has apparently spent the last two decades roaming the streets of Philadelphia in a raincoat dispensing justice, if perhaps on a slightly small scale. Even his day job fits into this mindset – he runs a home security store with his now adult son (Spencer Treat Clark, revising the character he played as a child in Unbreakable).

Dunn’s self-proclaimed nemesis was Elijah Price (Samuel L. Jackson), aka Mr. Glass. Elijah’s superpower is his brilliance; however, he is betrayed by his body, which due to a childhood disease makes him extremely susceptible to broken bones. Elijah has apparently been locked up in a mental hospital, extensively medicated, for the 19 years since Unbreakable. He appears to be nearly catatonic – but is he understanding more that is going on around him than he lets on?

The villain from Split is Kevin Wendell Crumb (James McAvoy), a serial kidnapper with DID (Dissociative identity disorder) who has 24 different personalities battling with each other for supremacy, including one horrific one called “The Beast.” Crumb has been kidnapping groups of a few young high school girls (this latest time all cheerleaders) and eventually killing most of them.

The one kidnapped girl that he did allow to go free was Casey Cook (Anya Taylor-Joy), a smart, beautiful and empathetic young girl who was able to see beyond the monster in Crumb and find the humanity. (In most, if not all of his personalities, too.) Also, she shared a history of childhood victimization with Crumb, surviving a horrific relationship with an abusive uncle.

Okay, it’s a pretty random grouping, but some rather interesting characters. What will Shyamalan do with them now that he has gathered them together?

Disappointingly, for a huge chunk of Glass, he just puts them through group psychoanalysis.

Like 20 minutes into the film, the story locks them all up in a mental hospital – well all except for Casey, who just visits the place periodically and voluntarily. At the hospital, a shady-seeming government psychologist named Dr. Ellie Staple (Sarah Paulson) attempts to convince the three that they are not superheroes. They are normal men and all their “powers” can be explained away rationally. Of course, even the doctor’s basic premise is flawed – only one of the three self-identifies as a superhero, the other two are super-villains.

With few short exceptions, we do not leave the mental hospital again for well over an hour of the film’s running time. Yawn.

It’s a bit of a shame, because some of the early scenes such as Dunn and his now 20-something son scouring the city (and the internet) looking for criminals, are somewhat intriguing. On the other hand, I did (and do) have the same problem with the character of Crumb as I did in Split. His flittering from one personality to another on a dime seemed a little ridiculous – though I do admit that McAvoy does a great job of giving each personality a distinct lifeforce.

Still, I wish that Shyamalan had allowed the characters to stay on the streets of Philadelphia, saving the day and doing battle and getting into some adventures more gripping than Mr. Glass sneaking out into the hospital late at night in his wheelchair.

By the time that Shyamalan’s inevitable trick ending comes along, we’ve mostly stopped caring what is going on in their world.