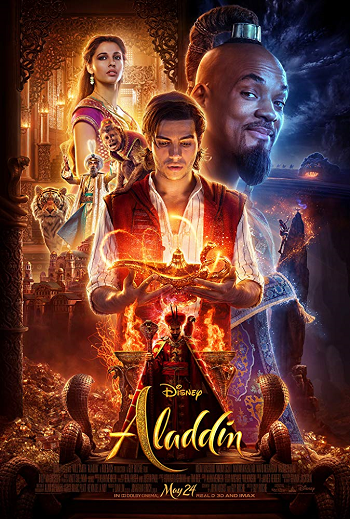 As has been noted many, many times before, it appears that the Disney folks have decided to make live-action remakes of just about every one of their animated classics. Sometimes it works – things like Cinderella. Sometimes it’s good but an ultimately pointless exercise since the new version adds little or nothing to the original – like Beauty and the Beast, Pete’s Dragon, Maleficent and Jungle Book. Most often it’s a bit of a train wreck – take Alice in Wonderland, 101 Dalmatians, Dumbo, The Sorcerer’s Apprentice and Christopher Robin.

Aladdin is the second of three of these reboots coming out in 2019 alone. Dumbo already came and flew away with very little fanfare a couple of months ago. The Lion King is scheduled to start later this summer.

I have to say straight out that Aladdin is probably one of my two favorite classic Disney cartoons. The other one is Beauty and the Beast, which came out within a year of the original Aladdin, a real high point in Mouse House animation. However, as I’ve pointed before – particularly with Beauty and the Beast – the original is still out there, is under 30 years old and has been widely available for most of that time. Why do we need another Aladdin when the original is pretty darned near perfect?

Add to that fact that this new version of the film is directed by Guy Ritchie, of all people – the director behind such violent-but-kinetically lightweight films as Lock Stock and Two Smoking Barrels, Snatch and the awful Robert Downey Jr. Sherlock Holmes movies. There is reason for concern here.

Therefore, I’m happy to report that the live-action version of Aladdin is actually good. Very good. Sure, it’s not on the level of the animated original, but it’s in the ballpark. It comes closer than we had any reason to believe it would.

Smartly, Ritchie doesn’t try to reinvent things here. He stays pretty faithful to the original storyline, right down to reusing a good amount of the dialogue from the earlier version. The tone is a bit darker, a bit more serious. The humor is still there, just muted a bit, particularly in the case of the scene-stealing parrot Iago who barely makes an impression in this incarnation. However, the original Aladdin was an action movie as much as anything, and thus it fits into a more realistic setting pretty well.

The biggest risk was taken by Will Smith, who had the thankless task of playing the genie, a role that was made iconic by Robin Williams. Smith recognizes the big shoes he’s filling and does as well as anyone could do in such a position. He knew no one can out-Robin Williams the late great Robin Williams, so he changes the character just enough to make it his own. Smith’s genie is a little calmer, a little more reserved, but still damned funny in his own way.

As said before, the rest of the film is pretty faithful to the original, to the extent of also recreating some of the shots and animated footage. Thus, the story of a “street rat” meeting a princess is not only affecting because it is a good story, it also adds an element of nostalgia for the original version. When the story deviates, that also adds an intriguing element.

Since Disney is all-hands-on-deck with this whole live action versions of animated classics idea – beyond The Lion King coming out later this year, versions of Mulan and Lady & the Tramp are coming next year and Pinocchio, The Hunchback of Notre Dame, The Sword in the Stone and The Little Mermaid are all in development – then Aladdin should be looked at as a model of how to do it right. A mixture of nostalgic love for the original and just enough changes to make the film unique sounds like a winning formula.