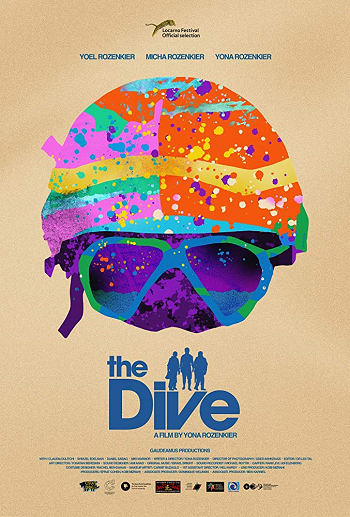 It is an intriguing look at life during wartime, how love and family can be warped by the constant threat of artillery attacks. People at kibbutz are given about a minute’s advance warning – by text message, no less – that shells will be falling nearby.

These three brothers are reunited for the funeral of their father. Dad had actually died a year before, but the service was delayed because he left nearly all of his body parts to science. He asked his three sons to reunite for “the dive” of the title – he wanted some of his body parts left at a nearby underwater cave.

The three brothers are all very different types, divided by beliefs even as they are united by bloodline.

Avishai (Micha Rozenkier) is the youngest brother, who is due to report to the military for the war after the funeral. He is obviously torn, patriotically he feels the responsibility to fight, but he’s also secretly horrified by the reality. We first meet him walking into town and cowering as incoming fire arrives.

The oldest brother is Itai (director Yona Rozenkier), an alpha male who is obsessive about warfare, even though he has already served his time. Still, he takes it upon himself to train Avishai survival, sometimes in rather cruel ways.

The middle son is Yoav (Yoel Rozenkier). It is rather a surprise that he made it at all, he was estranged from the late father and family when he left the military and moved to Tel Aviv to be a veterinary nurse. He suffers from PTSD and is determined to save Avishai from war, all the while butting heads with Itai.

The Dive is a small, intimate, tense and slightly dirty film. It tells the story of a family which also acts as a metaphor for larger societal ills.

Yona Rozenkier was wise to trust his brothers – who are not professional actors, I believe – to pull off these complex roles. Particularly Yoel, who is the heart and the moral compass of the film, though the writer director shows some acting skills, too.

The filming is suitably grimy and tinged with debris, which makes sense right by a war zone. Yona’s skills as a writer and actor are probably a little stronger than his skills as a director, but this is his first time, he’ll get even better. At least he connected to a story which was vital to him and made it important to us as well.