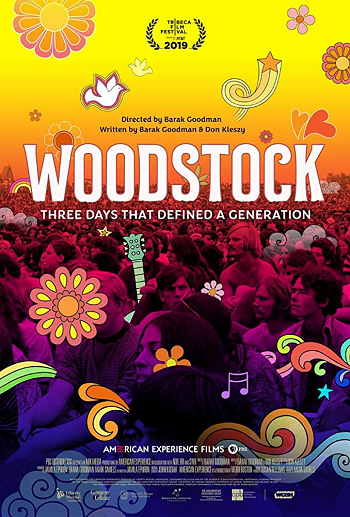 As we close in on the 50th anniversary of one of the most legendary concerts ever, three days of peace and music which ended up drawing nearly a half a million fans, it is a good time to look back at this iconic event.

Of course, Woodstock is already the subject of one of the most popular documentaries ever. So, how much can Woodstock: Three Days That Defined a Generation add to our understanding of what happened on those summer days in Bethel, NY?

Not all that much, honestly. Which does not mean that it is not an enjoyable nostalgic look back at the event. It’s just that this festival has been examined exhaustively for nearly 50 years. How much new is there really to say?

Still, I’ve got to say, I’ve never seen the footage of Woodstock – particularly the crowds and passersby – look so crisp and modern. Compared to the muddy footage of the original Woodstock movie (and lots of other earlier film about the festival), much of this old film positively pops on screen, to the point where it almost feels like a modern reenactment of what happened. (There are enough background shots that are obviously impossible to recreate that makes that unlikely and near impossible.)

Three Days That Defined a Generation interviews many of the people who were behind the idea of the festival (though Artie Kornfeld is conspicuous in his absence). They also tracked down the people who worked to create and run the show, quite a few fans who experienced it and local townspeople whose bucolic little village never before (or since) saw such a massive event.

One slight problem with this doc – the music gets a bit of a short shift. They do show clips of some of the most obvious musical highlights; Jimi Hendrix’ “Star Spangled Banner,” Richie Havens’ opening set and improvised song “Freedom,” The Who closing down the second night. However, there are relatively few songs shown from the three days (and I get it, they are probably expensive to license).

Also, only four of the musical artists who performed are interviewed about the experience – and three of those four artists are dead, so chances are those quotes were taken from archival footage. (There are no talking heads in this movie. All interviews are audio only, run over film of the event.)

However, Woodstock: Three Days That Defined a Generation does a good job of showing how the festival fit in to the historical makeup of the late 60s, and how much of a wondrous miracle it was that the weekend proceeded with little violence, few arrests, no deaths, nothing but peace and love.

As stated before, you aren’t going to learn much that is new about Woodstock from this film. Still, sometimes it is enough just to go back to the garden.