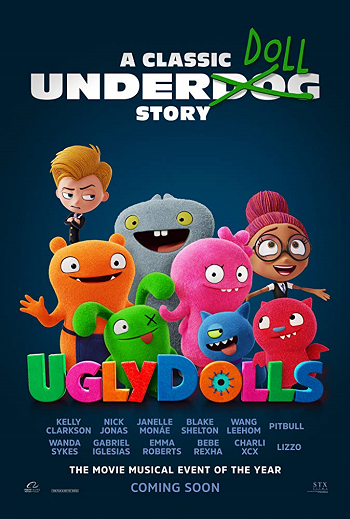 When you find a nice little children’s movie that has its heart in the right place which tries to impart an important message to kids about loving yourself as you are and that it is okay not to be perfect, it seems a little petty to point out that the movie is really far from being perfect. In fact, it’s kinda bad.

Which is not to say that it will not be entertaining for small children. However, as an adult man, it was a bit of slog sitting through. I recognize that I am totally out of their intended audience demographic, but I can’t see any kid over… say 10 years old… sitting through UglyDolls without squirming. Besides, would it kill the filmmakers to make the movie amusing to the parents who may have to watch this over and over with their young kids?

It is loosely based upon a popular set of dolls which came out around the turn of the millennium. Sort of a variation of the Island of Misfit Toys from the old Rudolph the Red-Nosed Reindeer Christmas special, UglyDolls looks at the… well, ugly dolls… who live together in harmony in a frenetic, colorful city called Ugly City. The city is made up of irregular toys which were not able to be sold so were sent to live together in this town full of fun-loving rejects.

Most of the toys have made the best of it, however there is one odd-looking ragdoll called Moxy (voiced by Kelly Clarkson) who is still optimistically determined to find a child to love her.

Therefore, she drags some of her misfit friends on an adventure to find the way to get in front of children. They end up in a doll training facility which stresses perfection and is run with an iron fist by a snobbish doll named Lou (Nick Jonas), who insists that any doll who will make it through to get a child be as flawless as he is.

You know where this is going, right? Of course, you do.

Cue some sweet if slightly heavy-handed lessons about being yourself and loving your flaws. Moxy and her friends strive to be perfect, but eventually realize that they are perfect as they are. In the meantime, Lou turns out to be petty and vindictive, and… well… imperfect.

It’s all told with the subtlety of a mallet, but it gets its points across.

Surprisingly, the songs are often relatively good, well-sung (often by big-name pop stars) and choreographed, and very theatrical. Oddly, smack dab in the middle of the musical score they do a cast performance of Hall and Oates’ “You Make My Dreams” as if it was just another part of the music written specifically for the movie.

So, basically, if you have young kids (or are one), chances are good they’ll like Uglydolls just fine. If you’re a little older you may be less impressed, but there are certainly worse kids films out there to take your time up.