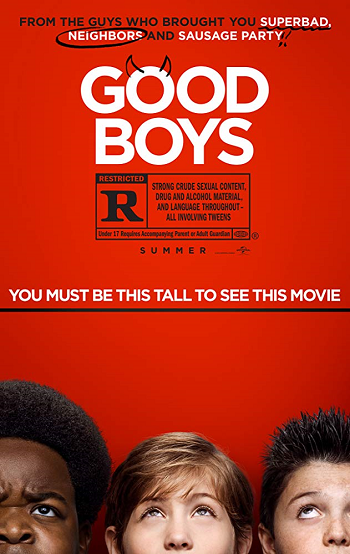 Good Boys isn’t just the funniest film I’ve seen in years, it very well might be an instant comedy classic.

I’ve been excited to see Good Boys ever since I started working here at Pop Entertainment. It was the first movie premiere I was supposed to attend for the company and the first review I was supposed to write before it got pushed back a month. So, I’ve just been waiting in anticipation and watching the trailers over and over, hoping Good Boys was really going to be as hilarious as it looked.

It did not disappoint. Not by a long shot. It was absolutely hysterical. It had me and my father in tears from start to finish. A lot of the jokes really managed to catch us off guard with the direction they came from and ended up going. That’s not easy to do. I know my father and a movie has to be especially funny for him to laugh the way we he did throughout Good Boys’ hour and forty-minute runtime.

I’d say how hard I laughed, how hard my father laughed, and how hard the entire packed theater in the premiere laughed throughout the film would be a solid gauge of how funny this movie really is. I know it’s anecdotal, but I really haven’t been in a theater for a long time which that had such a positive energy in the crowd.

That’s a big reason I’m already feeling like Good Boys shares that same instant classic energy as the movies it was so clearly taking inspiration from, like Superbad for example. (Two of the producers of Good Boys were Superbad writers Seth Rogen and Evan Goldberg.) And just so you all know, I’m well aware of how big of talk it is to compare a comedy to Superbad… and I’m doing it for a reason. Good Boys is that fucking funny.

After seeing Good Boys on Tuesday night, I had a lot of time to think about what specifically made the movie so damn hilarious before sitting down to write this review. I went back and forth between thanking the incredibly talented and hysterical child cast, and the cast at large if we’re being honest, or thanking the script and the writers at large for how funny Good Boys is. I realized the answer is obvious, as great as this movie turned out the answer is obviously both.

But I truly believe this movie would not have anywhere close to the same comedy magic without its cast, so I want to start with them. The movie follows a trio of sixth graders, Max (Jacob Tremblay), Lucas (Keith L. Williams) and Thor (Brady Noon). They get involved in lots of adolescent adventures. They try to replace Max’s father’s expensive drone which they broke. They try to outrun the neighborhood high school girls and even the police. They manage to get the “kissing” party that night in time for Max to get his dream girl. Thor wants to sip a beer at the party to lose his unfortunate nickname. Lucas just wants to stop having an anxiety attack!

The best thing about their performance, as a trio and as individuals, is in all honesty their authenticity. As raunchy and over the top as this movie gets, and as shocked as you sometimes are to hear the sort of shit you hear come out of their mouths, at no point do you ever feel like they aren’t the age they are or that they aren’t actually “real” kids. The movie is nuts, and they let themselves go nuts, but they never lose that raw authentic sixth-grade energy that is probably what led the casting director to cast them in the first place.

Good Boys is that sort of special.

Again, to compare it to another one of my all-time favorite comedies, after I watched Superbad for the first time, I remember feeling two things. I wanted to watch it again as soon as the credits started rolling. And I was going to see at least a couple of its stars over and over again in the years to come.

I feel the same way about Good Boys. If I had to say, I would say Lucas (Keith L. Williams) and Thor (Brady Noon) have more of a likelihood of sticking around in the comedy world because they’re clearly so uniquely and naturally funny. They have the timing of comedians triple their age. But Max (Jacob Tremblay) is adorable and a total charmer, so I wouldn’t be surprised if we see a little bit of all three of them.

I also loved the choices for the supporting cast. Everyone was hysterical and everyone felt real within their role. Lucas’s dad (Lil Rel Howery) is always so funny in everything he’s in – Get Out especially – as well as Benji (Josh Caras) were highlights for sure. They had me dying whenever they were on screen.

There’s not much more I can say about Good Boys. There’s a lot I’d love to say about how funny this movie is, or go into specifics about this joke or that joke, but with a movie as great as this I really think the more I let it speak for itself, the better.

So, I’ll speak plainly, Good Boys is hysterical. It is the first movie I’ve seen all year I wouldn’t change a thing about. Good Boys is that type of laugh out loud, tears rolling down your face, yelling your own comebacks at the screen type of funny we don’t get enough of anymore. It’s that type of comedy that any type of person can and will die laughing at. Good Boys is a must see.

So, stop reading this and go see it today! I promise you won’t be disappointed!

One thought on “Good Boys (A PopEntertainment.com Movie Review)”