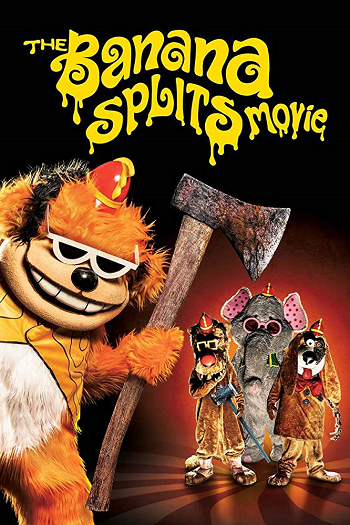 Talk about high concept. There must have been some really twisted geniuses who came up with this idea.

In the alternate universe of this film, the goofy and mostly long-forgotten 1960s Sid & Marty Krofft Saturday morning kids’ show The Banana Splits has still been running for over 50 years now. Somewhere along the way the men in silly animal suits have been replaced by robots, but they still sing that infernally catchy “Tra-La-La Song.” (Interesting trivia fact that is not acknowledged in this movie, much of the Banana Splits music was performed by a pre-stardom Barry White.)

Anyway, back to the high concept. In this odd, different world, the Splits are still very popular and have a smaller but still rabid fan base. Then, when an evil executive takes over the network and decides that the show is too corny and must be taken off the air, the lovable characters go into a violent homicidal rage, graphically killing off co-stars, executives, crew and fans on their otherwise abandoned sound stage.

It’s a crazy, off-the-rails idea. Pity that the movie is not nearly as entertaining as its concept.

The Banana Splits Movie wants to be so much cleverer than it actually turns out being. The idea is so oddball and off the wall that you’d really love for it to become a much more interesting movie. But honestly, the premise behind The Banana Splits Movie is the only stimulating thing about it. Otherwise it’s a pretty generic splatter film with the killers dressed up in particularly goofy costumes.

There is a certain amount of nostalgic Easter eggs for fans of the original series – but let’s face it, the show has been off the air (in the real world) since 1970, so how many of those fans are still out there waiting for a nostalgic jolt? And if they were, would the fans of the sweetly goofy and innocent original series be looking for the very dark turn of making Fleegle, Bingo, Drooper and Snorky into violent, psychotic serial killers?

Or is The Banana Splits Movie just irony for irony’s sake? It feels like one of those winkingly cheesy made-for-SyFy Channel movies like Sharknado, or Megapython vs. Gatoroid, or DinoShark, or Zombie Tidal Wave. No one expects them to be good, so the filmmakers see how glaringly bad they can be, all done with an ironic, post-modern wink. (Not surprisingly, The Banana Splits Movie will have its cable debut on SyFy this fall.)

It would be hard to get more post-modern than The Banana Splits Movie.

Is there an audience for this? Sure, they made six Sharknado movies. There is a surprisingly big hunger for violent, nostalgic Cheez Whiz. Because this is being released straight-to-video instead of on cable, it has an R-rating, allowing it more gore than the SyFy movies usually can pull off.

I do pity any straight-up old-school Sid & Marty Krofft fans who might stumble upon this movie and decide to give it a try for old time sake without reading a description of what this movie is really all about. They are going to be in for one hell of a shock.

Continuing the strange Banana Splits history of surprisingly well-known musicians behind the scenes, the music for The Banana Splits Movie was done by Patrick Stump, lead singer / songwriter of Fall Out Boy. (He uses the real spelling of his last name, Stumph.) Of course, had I not seen that on a credit listing I would never have known it was him, the music sounds nothing like the stuff the guy does in his day job. (Which I guess you could have also said about Barry White before him.) In fact, other than the multiple plays of “The Tra-La-La Song” (including a new cover of the tune by Stump played over the closing credits), the score here is pretty generic horror movie stuff.

Then again, like I said before, other than the weird fact that the insane killers are somewhat iconic kids’ TV characters, all of The Banana Splits Movie is pretty generic horror movie stuff.