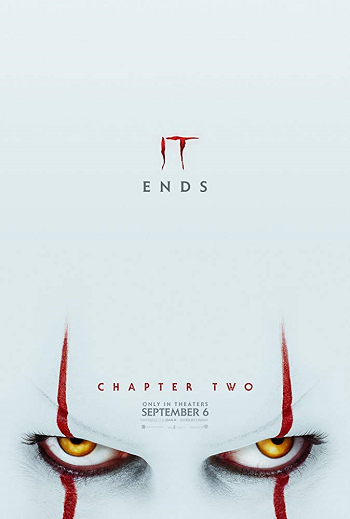 Full disclosure here. I love Stephen King’s novel IT. I love the 1990s miniseries of the book, even though as a television production in the early 90s the violence and gore were necessarily soft pedaled a bit. And I loved the 2017 movie version of the book.

And now, for the finish of the IT movie saga, I loved it as well. Mostly…

The biggest problem about IT: Chapter Two was also the biggest problem with the novel and the previous mini-series incarnation of the book. Stephen King created a truly spectacular horror story, but eventually he wrote himself into a corner and had no real way to finish it. The end of the book was always disappointing, as was the finale of the 1990 miniseries, which changed the ending somewhat, but ultimately couldn’t really fix this simple flaw. IT: Chapter Two also massages the climax, using the original as a template but bringing its own vision to bear. Unfortunately, they also can’t crack the code. This primal scream of a story ends with a whimper.

At least IT: Chapter Two is self-aware of the problem and has a little fun with it. There is a running gag throughout the movie in which the character of novelist Bill Denbrough (who was obviously written to represent King) is told by several different people that they really like his books, but they don’t like his endings.

IT: Chapter Two is also more reliant on jump scares than the first film in the series. Which is okay, I suppose, it is a horror movie. But it is not necessarily as effortlessly creepy as the previous film. It feels like it’s trying a bit harder to creep you out.

That said, the second film is also a little more faithful to the book than the first one, which is a good thing. Almost three hours seem to fly by (between the two movies the running time of the story is longer than the old miniseries) and we are forcefully reminded, once again, why we’re afraid of clowns.

The first IT movie concerned itself with a group of outcast children – the self-described “Losers Club” – who band together to take on an evil creature which shows up in Derry, Maine every 27 years to feast on small children. The creature can appear as anything that scares people, but it mostly appears in the guise of Pennywise, the dancing clown.

Chapter Two returns 27 years later. It turns out that the kids did not kill Pennywise as they had thought. The killings have started up again. Most of the losers have scattered around the country, becoming abnormally successful and having pretty much completely forgotten their childhood adventures. Only one of them has stayed behind, Mike Halloran the librarian, who contacts his old friends to keep the promise that if IT came back, they would return to kill him.

It is a simple, horrifying idea.

IT: Chapter Two is bloodier than even the first movie – sometimes almost cartoonishly bloody. However, the film also brings to light some classic moments from the book which were not covered in the miniseries – a gay couple being beaten by local hoods while Pennywise watches, the attack of a giant Paul Bunyon statue – as well as giving new life to classic scenes from the book.

The child-killing aspect is somewhat downplayed here – there are only a couple of those scenes – which may be for the best. The ensemble cast of grown Losers, particularly James McAvoy, Jessica Chastain and Bill Hader (who steals the film in comic relief) are all terrific in their roles. And Skarsgård still raises goosebumps as Pennywise the clown.

As stated before, the ending gets a little ridiculous, but that is a problem with the source material, not the film. IT: Chapter Two brings things to as good of a close as can be expected. Well, perhaps not to a close. Director Andy Muschietti said in a recent interview that he would love to return to the story of IT, perhaps do a prequel that revolves around the back story of Pennywise over the generations as described in the book. There was a certain amount of this background in the first IT film, but it is not a big part of Chapter Two. Of course, this was not a specific plan – Muschietti is currently busy doing The Flash for the DC Extended Universe – but maybe someday. We can dream, right?

In the meantime, IT: Chapter Two finishes the story with style, a bloody, slightly cheesy, but fun and funny thrill ride. I personally can’t wait until they hopefully come out with a director’s cut mega-mix of the two films merged into a big whole. That will be some good binging.