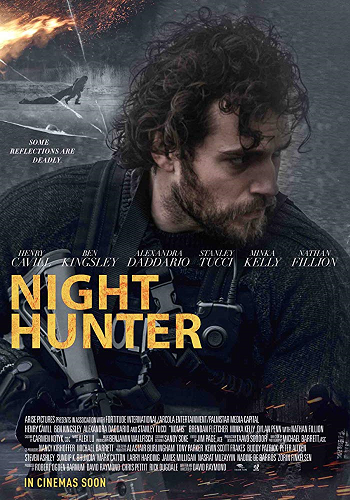 Night Hunter is a pretty generic, rather ambiguous title. Sure, it imparts a vague sense of danger – but what is it about? Is it an African safari? A celebration of the dawn? A sci-fi adventure? A bio film? A police procedural about a serial killer? Ding ding ding, we’ve got a winner.

Of course, the title is less inscrutable than Nomis, the title that the film went by when it briefly got a short, limited release last year. What is that even supposed to mean? (For the record, it is Simon spelled backwards, a clue in the case which seems to have been deemphasized now that it is being released on video under a new title.)

And honestly, this sordid but actually sometimes very scary thriller rides on one of the oldest, most overused plotline tropes out there. Just a month ago, I called out another film [Killerman] for using the old cliched amnesia storyline – and here it is again, though in fairness Night Hunter does do something a little different with it. I won’t tell you what, because that would be a major spoiler. I won’t even tell you it necessarily works, but it is definitely something different.

So, what is it about this little serial killer melodrama which attracted such heavy hitters as Henry Cavill, Ben Kingsley, Stanley Tucci, Alexandra Daddario, Nathan Fillion, Minka Kelly and more to sign on?

Honestly, for better or worse, Night Hunter has a bit of the feel of a big screen episode of the TV series Criminal Minds. People are fascinated by serial killers – the more depraved the better – and this is the territory in which Night Hunter treads.

It works in a particularly seamy area of this territory – the killer is a pedophile who imprisons and tortures young women. (Ironically, actress Daddario, who plays one of the lead detectives on the case had experience on the other side of the story as the young captive about 10 years ago in the film Bereavement.)

Plus, to make things even more complicated, the killer has multiple personalities and no memory of what he has supposedly done.

The guy is being chased by a group of miserable local cops; Marsha (Cavill), an insomniac divorcé whose daughter was victim to a horrible accident, Rachel (Daddario), a profiler who is separated but still married but having an affair with Marshall, and Commissioner Harper (Tucci), who is essentially the prototypical hard-boiled police chief.

There is also a vigilante out there, Michael (Kingsley), a former judge who has decided to take the law in his own hands in his private war on pedophiles. He teams with Lara (Eliana Jones), a jaded teen who uses herself as bait to bring perverts out of the woodwork. Together, they perform their own brand of hard street justice on the miserable men they capture.

These two groups collide when Lara is captured by Simon (Brendan Fletcher), the killer the cops have been on the trail of. Simon is captured relatively early in the film, but he claims no knowledge of Lara’s where-abouts, nor does he have info on any of the killings. None of his alternate personalities, each more pathetic than the other, admit to knowing anything as well.

Cue lots of cross-examinations, attempted escapes, subterfuge and red herrings. Some of it is genuinely scary, other parts are just silly, leading to the trick ending which is honestly kind of a ridiculous disappointment.

Does Night Hunter deserve the star-power of the cast it has compiled? Probably not. Is it worth seeing if it pops on in the middle of the night on cable or you stumble upon it on some streaming service? Sure, why not? It’s far from a good film, but if you are into this kind of thing, you could do worse.