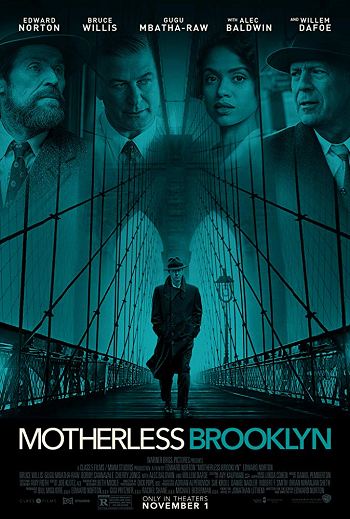 Edward Norton had seemed to have pretty much faded away from the Hollywood scene in the past decade or so, with his twin appearances in 2014’s Birdman and The Grand Budapest Hotel as his last significant roles. (And those characters were supporting roles.) Considering how big he was in the 1990s and the early millennium – with films like Fight Club, American History X, Red Dragon, Moonlight Kingdom, Rounders, Frida, The Incredible Hulk, Primal Fear and The Illusionist – his absence was notable.

Motherless Brooklyn is his flashy return to the bigs. Norton stars in the film, directs it, and wrote the screenplay (based on Jonathan Lethem’s 1999 novel). The story is a byzantine and intricate film noir, a look back and 1950s gangsters, private eyes and massive corruption which feels like an east coast variation of Chinatown.

However, to paraphrase that movie: Forget it, Jake. It’s not Chinatown.

The fact that it can’t keep up with one of the great noir films of all time is no great surprise, nor is it something for Norton to be ashamed of. That it falls well short of the mark may be more of a concern, though overall Motherless Brooklyn is a rather good piece of hard-boiled detective fiction.

This has been a dream project for Norton, who has been trying to get it made for almost two decades, since the book was released. You can see why he may be interested in the project, it’s tough, smart, and has a role for the director which can potentially cause some serious buzz. It is also suddenly very timely in the Trump era.

Norton certainly picked a complicated character for his hero. His low-level gumshoe Lionel has a pu pu platter of mental conditions. At different points in the film he shows signs of Tourette’s syndrome, obsessive-compulsive disorder, eidetic memory, Asperger’s syndrome, and more. It makes for a flashy, Oscar-baiting role, although in some parts of the film, particularly in the later scenes, he appears to have his conditions under almost complete control, except when their reappearance is convenient for the plotline.

Of course, his vast array of ticks and twitches and involuntary shouts make him an easy person for people to underestimate. Lionel is surprisingly smart, an investigative savant and a sweet, shy empathetic man. When he is not apologizing for his bodily functions and sporadic spontaneous exclamations, he’s actually a rather likable guy.

Lionel enters the action as one of the assistants for local investigator Frank Minna (Bruce Willis), a cool, apparently good guy who gets into the muck deeper than he should. Willis, who is actually in good form here, gets second billing in the film despite the fact that he is shot early on the film. (Sorry if that feels like a spoiler, but that shooting is shown during the trailer, so I don’t think it is supposed to be a secret.)

Lionel and his fellow members of Minna’s agency (Bobby Cannavale, Ethan Suplee and Dallas Roberts) start looking into Minna’s death, particularly Lionel, who has a dogged determination to discover the truth of Frank’s death. This leads him into a labyrinthine plot which involves the mob, a club in Harlem, local politics and a mysterious loner (Willem Dafoe) who keeps showing up trying to spur on the investigation. During the investigation, Lionel meets and falls for the daughter of the Harlem club owner (Gugu Mbatha-Raw), but she appears to be a target of the conspiracy.

The main bad guy is a city developer named Moses Randolph. For the novel, the character was loosely based on a long-time, rather corrupt former New York builder / government official named Robert Moses. However, with 20 years of hindsight, Moses Randolph is also very reminiscent of someone else many people know.

Randolph is a trust-fund baby New York real estate mogul with a God complex, one who is more than happy to destroy others over perceived slights, pushes himself on women, and thinks that it is his right to take whatever and whomever he wants. In fact, Moses even describes his “seduction” technique on an unsuspecting woman with the same predatory term used in a certain Access Hollywood tape: “I moved on her…”.

In case you missed the similarities between the bad guy and Donald Trump, they even got Alec Baldwin to play the character, though in a more ruthless, more intelligent, less clownish performance than Baldwin’s Saturday Night Live take on Trump. (Then again, this character is more intelligent and less clownish than Trump, but that’s a debate for another day.)

Motherless Brooklyn is actually a rather well-made film noir, though it is a little too complicated for its own good, and at nearly two and a half hours, could easily tighten its running time a bit. It’s far from perfect, but it is good and definitely a nice return to form for Norton.