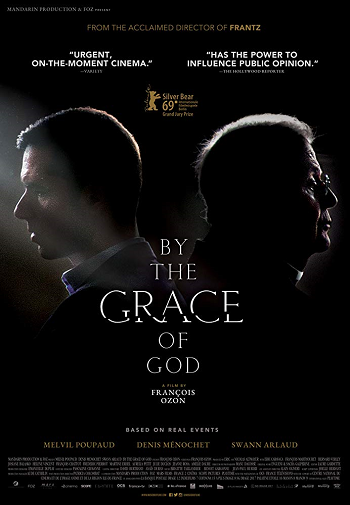 By the Grace of God

Screened at the 2019 Philadelphia Film Festival.

The sexual abuse scandals of the Catholic church have been a shameful blot on organized religion. However – and I apologize if it sounds like I’m trivializing the subject, which I would never do – it has been responsible for some fine films.

A few years ago, it was Spotlight, the Oscar-winning film about the journalists who uncovered the cover-up in Boston; investigating charges against a long-time local priest which eventually leads to a complete shakeup of the Boston archdiocese. Other fine films which have tackled the subject include Calvary, Doubt, The Club and The Magdalene Sisters.

Now, acclaimed French director François Ozon (8 Women, Swimming Pool) takes on a similar situation to Spotlight in the French city of Lyon. However, instead of looking at journalists who brought the scandal to light, By the Grace of God shows grown victims who finally come to terms with the trauma they experienced as children. They insist on not only getting the priest who molested them fired but getting all the higher members of the archdiocese who looked the other way and covered up to be held accountable.

Ozon tells the story in an interesting way. There are essentially three very different lead characters, who take over the story at different points. There are other characters throughout, and the other leads do show up in sections where the other is doing the heavy lifting, but this narrative structure – one guy starting the movement, one guy taking over and getting it going strong, a final guy taking it over the finish line – makes for a naturalistic, realistic and intriguing storytelling device.

The opening of the film concentrates on Alexandre (Melvil Poupaud). Alexandre is a family man and a devout Catholic who has pretty much repressed his experience. However, when learning that Father Bernard Preynat (Bernard Verley) – the priest who abused all of the characters here – was not only still working for the church, but was working with children, Alexandre feels the responsibility to report what happened.

Father Preynat’s superiors – and specifically Cardinal Barbarin (François Marthouret) – tries to broker some kind of… well I’m not sure what they were thinking of… by allowing adult Alexandre to meet with his abuser. Father Preynat openly admits that he abused Alexandre and others.

One of those others was François (Denis Ménochet), a burly single man whose experience has led him to disavow religion. Like Alexandre, François did not want anything to do with the investigation at first, but as he allows himself to explore repressed memories of what happened to him. He becomes completely submerged in the cause, allowing his vehemence to affect his relationships with family in friend, obsessively trying to find justice.

The final grown victim was Emmanuel (Swann Arlaud) – who was the most damaged (physically and mentally) of the children of whom Father Preynat took advantage. Physically Emmanuel’s penis has become deformed, mentally he as near-epileptic seizures when under extreme stress. He is also in the middle of a toxic relationship with a girlfriend who he does not love or even like, but who he can relate to because she too is a victim of sexual abuse.

This group did have some success in shining a light on a dark chapter of the Lyon Archdiocese, however according to the information shown before the end credits much work still needs to be done. The story takes place in 2014, so what happens is still a work in progress. In fact, word is several people who were portrayed in the film – Father Preynat included – tried to sue to stop the release of the film.

Honestly, just as a film, By the Grace of God is not as good as Spotlight was. However, it is a fine – if disturbing – film about a most disturbing subject.

Interestingly, director Ozon, whose artistic eye can sometimes overshadow some of the films he makes, plays it pretty straight here. The story is the thing in By the Grace of God, and Ozon allows the film the natural pace of real life. It’s hard not to be disturbed by the occurrences in By the Grace of God, but it does also offer some hope for healing if the world acknowledges what has happened.