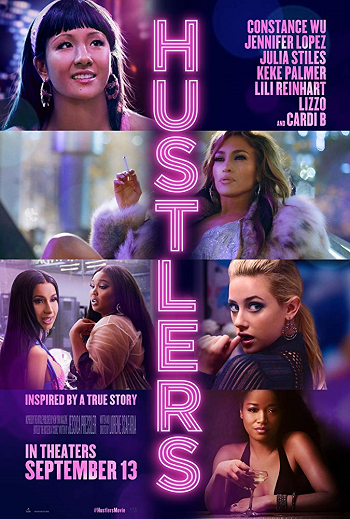 A few months ago, right before Hustlers was released to theaters, there was some buzz growing from the film festivals that this film was Jennifer Lopez’s best performance in years – going back to the Selena and Out of Sight days of the 90s – and she may be due some Oscar love. The role, people were saying, was that good, as was the film.

Fast forward to the present day, with the video release of Hustlers after a rather undistinguished run in the multiplexes. Let’s revisit those ideas. First off, yes, it is the best film that Lopez has done in years – perhaps since her music career eclipsed her acting back in the late 1990s. However, that is grading on the soft curve of the low quality of J.Lo’s projects in the last decade or two.

Hustlers is pretty good, but nothing great. However, compared to the likes of The Second Act, The Boy Next Door, The Back-Up Plan and Monster-In-Law – yeah, Hustlers is head and shoulders above those titles.

As for the Oscar buzz, sorry, but no. First of all, it would have to be a Best Supporting Actress nomination as Constance Wu gets significantly more screen time than Lopez. And while, again, yes this is better work that she has done in years, it’s not that good – not like one of the top five best supporting actress turns of year excellent work.

Honestly, J.Lo is a little too old to be a stripper in an upscale club. Don’t get me wrong, I’m not questioning the fact that she is quite beautiful or that she has the body or the talent for it. However, I used to know a woman who danced in one of those elite big-money clubs, and at 26 she was the old lady there. Lopez was pushing 50 when she filmed this.

But, okay, fine, Lopez does the role well. Hopefully it points to more good work in her career. Still, the Oscar buzz seems to have cooled down and it is for the best. Even if she got a nomination in honor of her long career (which is doubtful, since she has not exactly had an acclaimed Hollywood career), she would have no shot of winning.

So, getting rid of the pressure of awards season hype, what is Hustlers?

It is based on a true story – a New York magazine story about how a group of strippers in one of the hottest clubs in New York (Scores is the club’s real name, though it is called Moves in the film) had to get creative to make a living after the financial crisis destroyed their livelihoods. And by creative, I mean criminal.

I know they are trying to make it all about friendship and female empowerment and all, but I couldn’t quite buy it. This is, after all, still a story about women who use their sexuality to drug men and run up thousands of dollars on their credit cards. The fact that most of those men were slimy Wall Street assholes doesn’t excuse that fact or make it any more legal or right.

The dancers – who include Constance Wu, Keke Palmer and Lili Reinhart – make more and more money by drugging and scamming guys. It is the perfect crime they surmise, because no guy will go to the cops and their families and say they were scammed into spending thousands going to a strip club with four women. However, it’s a dangerous game they are playing, and the peril and money and guilt must be leading them into trouble, right?

I’m not saying, though I’m going to bet you could make a decent guess.

Hustlers isn’t the best of the girlfriends in crime movies which came out this year (that would probably be Widows), but it’s also not the worst (which I suppose would be The Kitchen.)

That said, oddly enough Hustlers seems to be one of the most realistic films made about life in a strip club, for what that’s worth. So, there’s that.

I would have probably enjoyed Hustlers even more if I could have wrapped my head around the film’s justifications that most of the guys got what they deserved. Perhaps, but what about their families and their businesses? Do they deserve to be punished because they are related to a guy who may be sleazy?

I think that Hustlers is taking the point of view that instead of the dancers being objectified in this scenario the guys are being objectified. However, in the world of strip clubs there is always plenty of objectification to go around. Teasing men for money is a form of objectification, too. I mean, I get it, a stripper’s job is to make as much money off a guy in any way possible. I don’t begrudge them doing their jobs and making as much money as they can. The guys understand that is part of the game.

But drugging a guy to get to his credit card is really pushing the envelope. No matter how much they are trying to couch it as a feminist manifesto or a working-class swipe at corporate robber barons, in the long run it is just stealing, making them little better than the slime balls they are targeting.