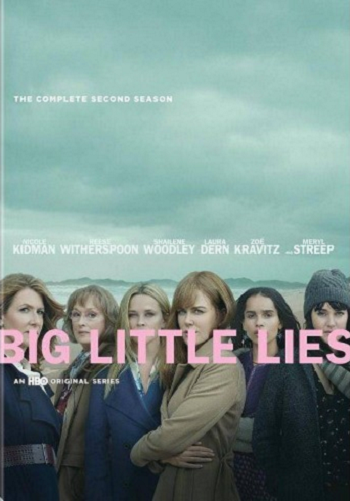 When Big Little Lies debuted on HBO in 2017, it was proof positive – if more was needed – that television drama had surpassed film as the go-to destination for Hollywood’s creative community. Created by longtime television icon David E. Kelley (Ally McBeal, The Practice), based on a hit novel by Liane Moriarty (who also contributed to the writing of the series) and directed by respected filmmaker Jean-Marc Vallée (Dallas Buyers Club, Wild), the series signed up the kind of deep and impressive cast that most movies could only dream of.

First off, the show signed genuine A-list movie stars Reese Witherspoon and Nicole Kidman for their first TV series work (though both had done miniseries early in their career). It surrounded them with impressive names like Shailene Woodley, Laura Dern, Zoe Kravitz, Alexander Skarsgård, Adam Scott and Jeffrey Nordling.

The story is a soapy mystery about five very dysfunctional mothers of first graders who are somehow involved in a mysterious death in a coastal California town. (Surprisingly for a high-profile show like this, Big Little Lies was filmed in Canada rather than California).

These mothers were Madeline (Witherspoon), the busybody stay at home mom whose current marriage is being negatively affected by her obsession with her ex.

There is Celeste (Kidman), the beautiful former lawyer turned stay at home mom whose seemingly storybook perfect marriage is being rocked by violence and abuse.

Renata (Dern) is the super-controlling mom and CEO who dotes over her young daughter, to the point that she messes up her relationships with other adults.

Jane (Woodley) was the youngest of the group, an outsider who dotes over her son Ziggy (Ian Armitage of Young Sheldon), even though he is the result of a long-ago rape. That trauma has made her extremely distrustful of other people, particularly men.

Bonnie (Kravitz) is also younger, and the only black person in the group (as well as one of few in the very homogenized community), the sunny and level-headed new-age second wife of Madeline’s ex.

They are drawn inextricably together in the first day of classes, when Jane’s son is unfairly accused to trying to choke Renata’s daughter on the schoolyard. Battle lines are drawn and the whole town joins into a skirmish about this schoolyard incident, eventually snowballing into an increasingly dangerous situation that leads to death.

They all live in glass houses – literally. Most of the homes on display are massive banks of huge, curtainless windows, the better to see the lives within.

It was a smart and dramatic and mostly realistic look at modern America – though one of the major final twists feels like a bit of a cheat, a bit too convenient and not realistic enough. However, other than that one complaint, it was a terrific season.

With an excess of caution about spoilers, I will not tell who was killed in the first season, simply because the killing was teased throughout that first season and the identity was the big reveal in the final episode. Chances are anyone who is reading about season two will have already watched season one, but I’m not going to be the one who ruins the surprises if someone hasn’t. It will make discussing season two a little bit tricky because most of the second group of episodes revolves around the fallout from that death.

So, how to one up the first season? Big Little Liars added a queen to the already stacked deck of their cast by signing up movie star Meryl Streep for her first TV series work (although, again, she had done earlier miniseries, including the classics Holocaust and Angels in America).

However, the second season lost director Vallée, who had moved on to another HBO miniseries, Sharp Objects. He was replaced by American Honey director Andrea Arnold, though eventually HBO felt her vision of the show was too dissimilar from Vallée’s original season and took the final edit from her, giving it back to Vallée, who had by then finished Sharp Objects. That is never a good sign.

When the second season was first aired last summer, it was met with much more muted fanfare than the first. That is probably because, honestly, the second season simply isn’t as good as the first. It’s not bad, mind you, but it has lost the unique spark and sense of adventure of the earlier episodes.

Season two mostly revolves around the aftermath of the death the complications of the lie they told the police – the five swear the death was an accident though it was caused by one of them, though she was acting in defense of her friend.

Their connection in experiencing the death has solidified their friendships at the same time as it tears at them – Renata and Bonnie, who were on the outskirts of the group before the death (and were even often antagonistic towards it), became charter members of “The Monterey Five” in the aftermath. It was the intimacy of a shared secret.

Interestingly, though the first season revolved around the children, in the second season they fade into the background somewhat. Oh, sure, they are still there, and all of them have some periodic storylines, particularly two kids who are in the middle of a custody battle, but they play much less of a part in the new season.

Instead, the show revolves around the group trying to cover up their parts in the death – even though had they not lied they probably would have been easily exonerated. This is made particularly difficult because the mother of the dead person is certain that it was a murder, or at least a killing.

Surprisingly, Streep as that mother is the weak spot in the season. Her character of Mary Louise is cut off, stringent and rather unlikable. This puckered and abrasive performance was undoubtedly what was asked of Streep – after all, the woman can play anything – but it makes the character obnoxious and unlikable. It saps the main conflict of the season’s plotline, causing the audience to root against justice, or at least the giving up of a toxic secret.

Season two will probably be the final go-round for the “Monterey Five” – most people involved say it is unlikely, but not impossible, that the show will return for a third. Honestly, I think it’s probably best that it doesn’t. Not to say that the second season was bad, but it ended in a very appropriate spot for the saga, an elegant place to end this particular story.