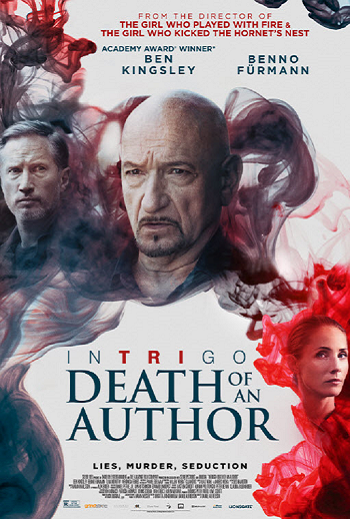 Intrigo: Death of an Author

Towards the end of his career (and his life), legendary actor Sir Laurence Olivier was asked why he took roles in so many films – like Clash of the Titans, Inchon, The Betsy, The Boys from Brazil, The Jazz Singer and The Jigsaw Man – which were obviously below his stature as one of the greatest actors of his generation. Sir Laurence was unapologetic about it, saying that he had worked at his craft for years to reach the stature that he could make money on just about anything, so why shouldn’t he and his family profit from his prestige?

Sir Ben Kingsley has reached a similar point in his career. He has made some unquestionably great films – Gandhi, Schindler’s List, Bugsy, The House of Sand & Fog, Elegy, Sexy Beast – but over the years he has been more than happy to take roles simply for the paycheck. These phone-them-in roles, like Night Hunter, Backstabbing for Beginners, Collide, Night in the Museum: Secret of the Tombs, Thunderbirds, The Wackness, The Love Guru, War Inc. and many, many more, have long overshadowed his quality work.

Intrigo: Death of an Author comes down somewhere in the middle. Despite getting top billing, Kingsley has about 20 to 30 minutes of screen time – at most. Benno Fürmann is the actor who spends most time on screen. As a film it is maddeningly inconsistent; sometimes terrific, at other times inscrutable, and sometimes completely unbelievable.

Death of an Author is the first film in a trilogy which was released in Germany in 2018. (The other two Intrigo films, with different casts and I assume totally different storylines, were released in Germany in 2019.) I’m honestly not sure why the trilogy is called Intrigo, at least from this first film. Intrigo is the name of a local restaurant in this film. There are a few scenes which take place there, but nothing of great note or importance happens during those segments – certainly not enough to explain naming the films after the place.

It has a cool concept, though, reminiscent of old whodunit classics like Sleuth; a young author meets up with an older author, looking for pointers on his manuscript based upon an earlier attempt – which may or may not have been successful – to kill his ex-wife. As the young writer (he eventually turns out to be a translator, not a writer himself) imparts his story, the possibility that the ex is still alive comes up. Also, there seems to be a tangential connection to the older scribe.

It is a long face-off of lies and half-truths, derring-do and one-upmanship, as the story becomes more detailed and both may or may not have some responsibility for the death of two different young women.

There are some odd, hard to believe points in the film – such as the suggestion that a man can realize that his wife is still alive because he hears a cough in the background of a classical music concert on the radio and becomes determined that no one else in the world has a similar cough.

Eventually, though, the young man’s actions and motivations make little sense, and the more we learn about him and what is going on, the less we buy into the narrative. And his climactic act is just confounding.

And Kingsley? Well in the periodic scenes where he pops up, he is Kingsley on autopilot; preening, cursing, intimidating, berating, and essentially acting superior to his young charge. Even after having seen the film I’m only halfway sure that I understand his character’s part in the mystery plot.

However, the flashback scenes – or the story within a story – are often very intriguing and well done, even if it does strain credulity to a breaking point.