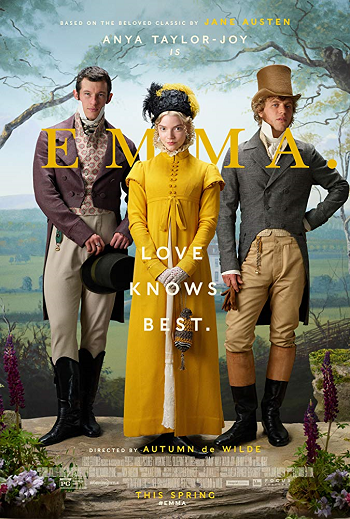 Fast forward 14 years, and 2020 brings us the quirky Anya Taylor-Joy in the title role of Emma. Did we need another retelling of this story?

For sure, I don’t hold as strong of an opinion about this Emma reboot as the Little Women reboot of 2019. I am always happy to watch the source material as a comparison to Clueless, a film that holds a forever place in my heart. With its bright, detailed costumes, humorous dialogue, and ruggedly handsome Mr. Knightley (played by British musician Johnny Flynn), Emma. was a very enjoyable way to spend just over two hours of my evening.

Emma. is a story of friendship, love, and class status with characters that feel almost parodied in their portrayal of the time. Emma befriends Harriet Smith (played by Mia Goth), a young girl of unknown parentage. This gives her an air of mystery – for she could be the daughter of a prince or a pauper – and tries to guide the young, eager for love Harriet to a match that could be worthy of her place in society. Meanwhile, Harriet is smitten with a young strapping farmer, Robert Martin, who Emma feels is below Harriet’s potential worth.

Emma is dedicated to her ever-chilly father, Mr. Woodhouse (played by the very funny Bill Nighy) and misreads the romantic intentions of town chaplain Mr. Elton (played by Josh O’Connor) as a potential match for Harriet. Emma has her romantic intentions focused in on another mysterious character, Frank Churchill (played by Callum Turner), who unbeknownst to (nearly) all, is harboring his own secret.

She nearly belongs to the very perceptive Mr. Knightley, who surprises himself with his growing affections for the clever, but romantically misguided Emma.

While I enjoy Anya Taylor-Joy’s past work in thriller pieces Split, Glass, and Thoroughbreds (to name a few), I was nervous about her taking on the iconic Emma role. I feel like she reached her own stride in the role by midway and worked the petulant early 20 something privilege with ease.

Mr. Elton’s wife (played by Tanya Reynolds) was particularly grating, a tribute to the actress, her hair stylist, and general direction of the film.

Noteworthy, the crew is very female friendly with direction by Autumn de Wilde, the screen adaptation written by Eleanor Cotton, and musical credit shared by Isobel Waller-Bridge with David Schweitzer.

I feel confident that if you are like me, Emma. is worth the watch, if for nothing else, as a timely revisit to the story made 1990’s popular by Clueless. If you are better read than I and have a special affection for the original Austen story, I look forward to your thoughts after you have watched Emma. Regardless, it is a film worthy of an evening in the theater that will leave you with a positive afterglow to warm you through this start of March.