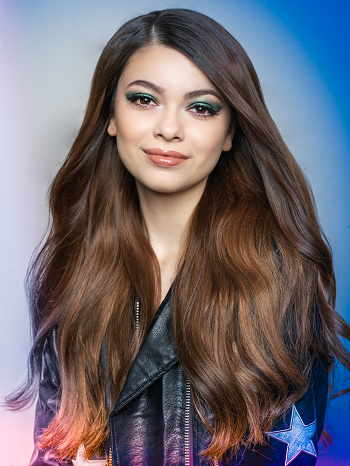 Stuck in Our Heads

Seventeen-year-old Nikki Hahn grew up in the public eye. She started modeling at three, acting at six and singing at about the same age. You’ve seen her in TV series like American Horror Story: Asylum (playing a young teen serial killer!), American Housewife, The Closer and the Disney Channel reboot of Adventures in Babysitting.

Her music career has been a little more low-key, she did a bunch of covers on her YouTube channel a few years ago, but now she is more interested in her own music. She has just released her first single – a dance jam called “In My Head” – and is working on more originals that she hopes to release soon.

A day after her hometown of Los Angeles went into forced shut-down due to the coronavirus pandemic, Hahn called us to discuss her music, her acting, her career and the crazy state of the world.

You are best known as an actress. How long have you been wanting to give music a try?

Music runs in my family. My dad is a guitarist. I’ve been singing for a while, since I was like six or seven. I never really put anything out. I really wanted to write based off personal experience. You have to experience stuff first [to write about] those experiences. It’s been in the works for a long time.

Okay, so you do write your own music. Spotify pages don’t have writing credits.

Do you enjoy writing songs? How do you get into that mode? What’s your technique?

I do. When I do songwriting, it tends to start off with a journal entry first. That’s my goal. I journal first. Sometimes I’ll write lyrics first. No melody really. (laughs) So, yeah, “In My Head” started off as a journal entry.

“In My Head” is very dance oriented. Is that the type of music you would like to work on, or would you like to explore different genres?

I’ve been thinking of exploring more acoustic, as well. That’s where I wanted to go when I first got into pop. I played some guitar when I was 12. I got really into Taylor Swift. She had five albums at the time, and I learned all of them on the guitar. I wanted to do something singer/songwriter acoustic. Then I started getting into Ariana Grande and it changed. But I still obviously love both. I think it would be fun to explore both, upbeat and acoustic. 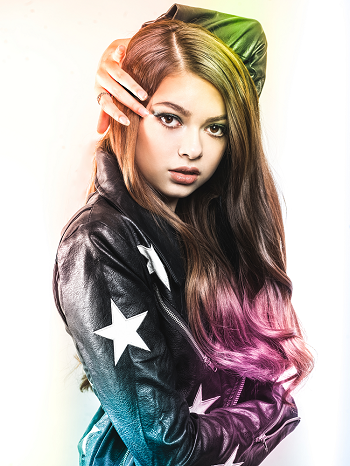 “In My Head” is your first single as a singer, I believe. How does it feel to get it out there for people to hear?

Have you been performing covers live, or on YouTube?

A little bit of both. I would do some livestreams on Instagram where I would play a guitar and just sing – take requests. I have some covers on my YouTube, but they are pretty old. I was like 12 or 13. (laughs) I grew up performing. I’m starting to perform more now, now that I have an original song. I still do covers, but I also have some songs of my own to sing.

Are you working on other songs – an EP or album maybe?

I am. I have been writing and recording the next single, so I’m really hyped for those. I think they are going to be still upbeat, party-vibed, but… yeah. (laughs)

Who are some of the artists who inspire you musically? “In My Head” has a bit of a Clean Bandit vibe….

Yeah, oh my gosh. So many people. The first person who really inspired me to write songs was Taylor Swift. I really listened to her stuff and I realized that I related to all of it. It made me realize that I could write about my own personal experiences. That’s what got me started on songwriting. And, yeah, I still have the same principle. I write based of personal experience. Teen stuff, a lot of teen drama in my life, so I have lots to pull from. (laughs) 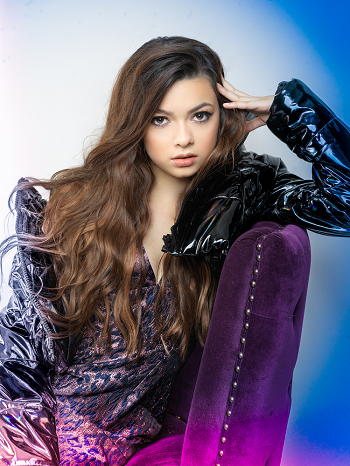 On those lines, what has been “stuck in your head” lately?

Oh my God! I always have something stuck in my head. (pause) I don’t know why, but earlier today I was singing “La Vie en Rose” (a French standard originally recorded by Edith Piaf and performed by many artists since). I don’t know why or where it came out of.

I just started humming it. Then my mom started singing it, too. I don’t know where it came from.

Maybe you were feeling a little French.

I was talking about Lady Gaga earlier, and I remembered A Star is Born (where she performed the song) and I started singing that.

Well, speaking of Lady Gaga, is it difficult to juggle your music and your acting career?

Not too much, actually. I’ve been doing both for a while. I have school, too, because I’m a senior. Yeah, it’s actually a pretty fab life. (laughs)

A few years ago, you did Adventures in Babysitting with Sabrina Carpenter, who also juggles an acting career with her music. Did that inspire you to see someone who is able to succeed at both at once?

Yeah, for sure. That’s definitely something that I want to do – continue acting and music. I was 12 when I did Adventures in Babysitting, and she was like 15 or 16. But that really inspired me. I wasn’t really singing at the time. At the time I was [doing] covers. [Working with Carpenter] really inspired me and made me realize that I could do both. Juggle it. You don’t have to choose one or the other. There are so many people who still do that, like Lady Gaga or Hailee Steinfeld. Those are definitely people I look up to.

Your version of Adventures was a lot different from the original. Were you familiar with the original before you took the part?

Yeah, actually I watched it before I went on the first audition. [The script] was called Further Adventures in Babysitting, whereas now it’s just called Adventures in Babysitting. I googled it and found out there was an original from the ‘80s. It was on Netflix at the time, which was so convenient. (laughs) I watched it before I auditioned. I got a feel for it. Got a feel for the adventure vibe. So, yeah, I had seen it.

You’ve also played in a lot of series like American Housewife and American Horror Story: Asylum. Lots of American shows, I guess.

What was it like to be part of those well-known shows?

Those are two roles that I had so much fun with. Especially American Horror Story, because I played a killer, and I was like nine. (chuckles) That was very different for me. You have to love horror. I really love horror, those are my favorite movies, so I had a blast on set. I got to walk around the asylum. (laughs) That was definitely one of my favorite roles. With American Housewife, I made friends with the cast and that was a lot of fun. I really connected with Julia Butters, who is now in Once Upon a Time in Hollywood. We became like besties on set. (laughs again) Yeah, I had a lot of fun with that, too.

You got started as a small girl as a model and then an actress. Do you remember a time when you were not involved in show business?

That’s a good question. Because I started so young, honestly, I really don’t remember a time when I wasn’t modeling or acting. I remember a time when I was acting, and my mom would act out characters with me at home. (chuckles) Technically I was acting, but I wasn’t in front of a camera. I wasn’t walking in front of a camera, yet. I remember that, but other childhood things, I don’t know, because I was so young. That’s just my life, and I’ve never known it any other way. I’m completely happy with that. Honestly, this is what I love, and I wouldn’t want to stop.

Do you ever look back at things you’ve done and think, wow, I’ve changed?

(laughs) Yeah. I grew up on camera. I think on The Closer, I didn’t have my two front teeth. I’d lost my two front teeth. Going through my IMDB pictures, or something, I see myself in all these different stages of life. Five years old to losing teeth to then 12. That’s super fun to see. (laughs again)

Okay and this is totally off the subject, but it’s been the biggest subject in the world for a few weeks now. How are you surviving the coronavirus scare and the lockdowns?

Yeah. It’s crazy, because LA is [usually] like the last place to shut down during these types of things. There’s so much going on, movie releases, and all this kind of stuff. But now it’s actually shut down. A lot of movies have been pushed that were coming out this month, they are being released later. A lot of movies that are in theaters are being released on Amazon. Yesterday the mayor announced that we are on lockdown, unless you are going to the store or something. But I’m okay. I’m home-schooled, so that part is the same.

Even though I sing pop, and a lot of my influences are pop singers, I actually love rock. I love ‘90s rock. Before I was born, my dad was in a band in Texas. He was playing metal or something. So, I grew up around rock. I also grew up around classical, because he also played that. Besides pop, alternative rock or ‘90s rock, that’s the second thing that I listen to. (laughs)

Do you think you’ll ever bring that type of feel into your own music?

Maybe. Yeah. For sure. I play electric guitar, too, like Nirvana and Green Day. So, maybe. Maybe I’ll have to pull out the guitar sometime.