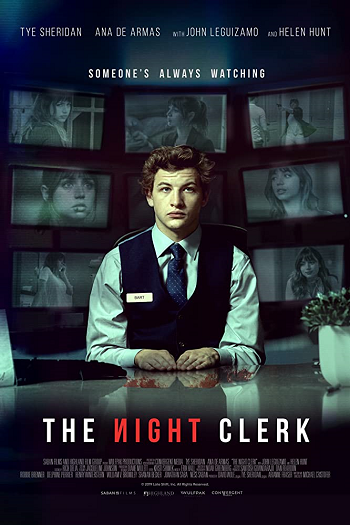 There is an art – well, maybe not an art, but at least a craft – to making a satisfying straight-to-video thriller.

It is a craft that the filmmakers of The Night Clerk show some proficiency in, however they are far from being completely successful at it. The Night Clerk takes an interesting and slightly sordid concept and eventually bleeds most of the suspense out of it.

It is a grabber of an opening, though. Bart (Tye Sheridan) is a young night clerk in a chain hotel. He has Asperger’s syndrome, which makes social interaction with the guests difficult, which is probably why he is stuck in the night shift.

One night, a pretty woman (Jacque Gray) checks in very late at night. Bart has an awkward exchange with her, and then as she retreats to her room, he opens his laptop and watches her inside her room, which apparently has several cameras set up throughout the suite. In fact, we watch Bart checking in on several families staying there: just normal things like kids playing, a man getting ready for a big meeting and the like.

It seems awfully creepy, though Bart later insists that it is not a sexual thing; he likes to watch how humans interact and tends to imitate it in his own life. Apparently, that is even mostly true, although later in the story he does take a more prurient – or at least romantic – interest in a femme fatale who registers at the hotel.

However, in this situation, his shift ends as he is watching the woman. He goes home and watches her (apparently not only does his laptop capture a live feed, it also records what is happening). He sees her letting a man in from a patio door. She is apparently a wife who caught her husband trying to cheat on her. They get into an argument, and then he attacks her. Bart rushes back to the hotel, but obviously is too late and finds the woman dead.

This puts him in a terribly awkward position. He can’t tell what he knows about the murder without revealing his habit of illegally spying on his guests. And yet, he is obviously covering something up. In fact, he has tampered with the crime scene to get rid of his cameras. And, due to his condition he is a terrible liar, and he knows just enough that he becomes suspicious to the head detective on the case (John Leguizamo). That suspicion grows when access to Bart is limited by Helen Hunt – in the thankless role of his haggard and over-protective mother.

His sympathetic boss likes Bart and doesn’t want to fire him, so he is transferred to another nearby location. This is where the above-mentioned femme fatale enters his life.

She is Andrea (played by the suddenly very busy Ana de Armas of Knives Out and the upcoming James Bond film). She is extremely beautiful, sweet, understanding (her brother also has Asperger’s) and very friendly. Soon Bart is finding himself having alien romantic feelings towards her, particularly after he stumbles upon her skinny dipping in the hotel pool. He dares to imagine that she may like him, too.

And then it turns out that she may have some sort of connection to the murdered woman.

Like I said, it’s a pretty neat setup. The problem is the suspense is sapped because we know from the start that Bart is innocent, and we are pretty sure who probably committed the crime. The only real questions that the viewer has is what will happen when Bart is caught videoing his clients, and whether Andrea’s apparent feelings towards Bart are legit or all an act.

However, the acting is good. Sheridan does a terrific job of acting like someone on the spectrum, and de Armas radiates an understated sexy charm.

The Night Clerk is far from being a great thriller, but it is a pretty good one. Sometimes that is enough.