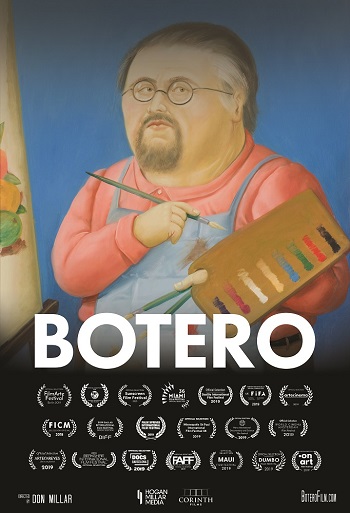 I have mixed feelings about the hour and 22 minutes I spent watching the documentary Botero about esteemed Colombian artist Fernando Botero. On one hand, his story was a catalyst for me to remember the importance of artists to the human spirit. In fact, I commissioned work from a local art student after watching the documentary. On the other hand, as I remember back to my viewing experience, Botero’s story as an artist feels a bit self-indulgent, and well, easy.

While I recognized his sculpture and paintings when they flashed upon my screen, I definitely had never heard of him before. Which isn’t a criticism – I am not an art scholar by any stretch. The artists that I am most interested in now started after watching their documentaries for PopEntertainment.com. But I am left with a feeling that I will not be going out of my way to see Botero’s work after watching his film.

The film briefly mentions Botero’s childhood struggles after the death of his father at a very young age, his grandmother’s support of his artistic work, and his satirical, irreverent response to religion – a bold statement at the time in Medellin, Colombia. He was thrown out of school for calling Picasso a Marxist and became an illustrator for his local newspaper.

After selling an early, original painting, he used the money to travel to Europe to study the masters. He started in Madrid and then on to Florence until he ran out of funds and returned to Colombia, but he had already found his early inspirations – and began to create his satirical style in Figurative Art.

Many of Botero’s known and celebrated works seem to be comically large headed characters painted in the style of the original masters – think Mona Lisa with a moon face and 14th century works where the characters now all have his signature look.

The film does little to excite me about these pieces, although it is fun to be shown where he has included self-portraits in the fine details of these works. His transition to sculpture felt even more uneventful on film, although his sculptures have been placed in the finest of venues all over the world.

The storytelling hits it’s best points when they talk about the loss of Botero’s young son from his third wife, the young boy that inspired the work “Pedrito on a Wooden Horse,” that period of struggle for Botero as a man and as an artist.

Overall, Botero is a fine documentary for an art student or art lover. Art critics may find the film humorous as Botero has spent his lifetime pushing through the negative criticism of his work. For the general public, maybe stick with Tiger King.