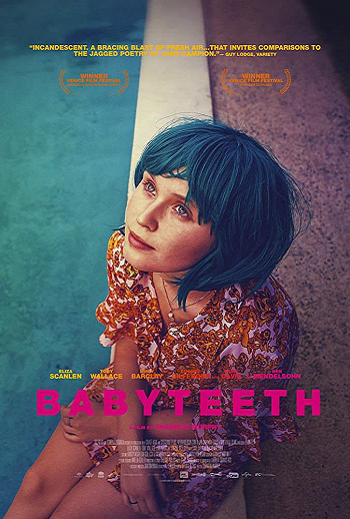 It’s been a while since I have knowingly watched a film in the drama genre. The world feels pretty darn serious right now, so my entertainment choices have leaned more towards distraction. Tonight, however, I feel thankful to have watched Babyteeth, a poignant, odd, character-focused, coming-of-age drama.

The film patiently plays out over a series of presciently titled vignettes. They sometimes feel unrelated beyond their linear progression in time, with an indirect focus on Milla’s disease progression, and how it affects her family and friends along the way. From Milla and Moses’ abrupt first meeting until the inevitable end, each vignette takes the viewer deeper into the at-times-unlikeable characters’ lives. It shows dynamic change that I’ve not often seen developed.

It begins with “When Milla met Moses on platform 4.” Milla is a uniform-clad student, violin case in hand, deep in thought as she waits for the afternoon train. While classmates are nearby on the platform, Milla appears uniquely alone.

When Moses abruptly enters her life prior to the train’s arrival, Milla welcomes the opportunity to change her path. She chooses to pause and speak to the charismatic, tattooed bad boy. When Moses discloses that he’s been evicted from his living situation, Milla offers money in exchange for his assistance.

Milla quickly realizes that the Moses’ living situation is more dire than she suspected. She brings Moses home to her parents, who we have only met moments earlier in vignette two “Anna & Henry’s Tuesday appointment.” It appeared to be a super inappropriate psychiatrist/patient relationship, but is in fact the parents regular date night, the planned sex and pharmaceuticals of a family in distress.

By scene title four, “Relapse,” we learn the why behind the distress. The scene titles are descriptive and fitting allowing for a short story anthology feel to this film, from first love, through betrayal, and heartbreak, and growth.

Centered around Milla, she brings out the best in those around her, even when the pain of losing her brings out their worst behaviors. Babyteeth, while at times odd and off putting, is a beautifully filmed piece, with great performances by its cast portraying challenging characters.

In the end, Babyteeth is at its heart a love story – an old soul teenager’s first love, a parent’s undying love for their child and the lengths they are willing to go for their happiness, a couples drift from and return to love through the stress of a terminally ill teen.

If you are looking for a good cry, Babyteeth is the cathartic film for you.